skip to main content
Return to Fordham University
You are at:Home»Fordham Magazine»Alumni News»From Weekend Treat to 80 Franchises: Anchal Lamba’s Bubble Tea Journey
In May, Anchal Lamba, FCRH ’12, pictured here in front of the East 187th Street Gong Cha, will open her second location in the Bronx. Photo by Argenis Apolinario.
When Anchal Lamba was growing up, Saturdays meant a trip to Flushing, Queens, for the family’s weekly bubble tea outing, but these days, she’s surrounded by the popular drink 24/7. Lamba, a graduate of Fordham College at Rose Hill, is a master franchisee for Gong Cha, a bubble tea retailer. Last fall, she opened her first Bronx location, on East 187th Street, near Fordham’s Rose Hill campus, and in May, another store is set to join the fleet at 327 East Fordham Road.

Lamba said that when she was a teenager, there weren’t nearly as many bubble tea options around, so her family would travel 45 minutes to Flushing, getting “like 15 bubble teas to take back to the house” in Long Island, where she grew up. They were such big fans that they even had the store manager’s phone number. Still, she had no idea she’d make a career of it.

Gong Cha, which means “tribute tea for the emperor,” was founded in Kaohsiung, Taiwan, in 2006. Lamba was introduced to the brand by her father, who had tried it during a business trip to Asia. She was intrigued, and that was all it took.

“We started negotiating, my father and I, with the corporate office in Taiwan for Gong Cha to develop here in the U.S.,” she said. “It was basically just a love of bubble tea and that opportunity presenting itself. I was ready to go all in because I also had the support of my father.”

From Fashion to Franchising

After graduating from Fordham in 2012 with a B.A. in international political economy and a minor in business, Lamba went to work at a private-label fashion accessories company in Manhattan. That’s where she was when her father tipped her off to Gong Cha, and things moved quickly from there.

She left the company after two years, as soon as her master franchise agreement with Gong Cha was finalized. And in January 2014, a week after resigning, she was on her way to Taiwan to “learn the ins and outs of the bubble tea business.” By April, she had opened her first location— in Flushing, the same neighborhood where her love for the beverage grew.

Eight years later, Lamba has launched 80 locations across New York, New Jersey, Massachusetts, Texas, Rhode Island, Pennsylvania, Connecticut, New Hampshire, and Oklahoma. She operates seven of those locations herself, and the remaining ones are operated by sub-franchisees. In 2019, Forbes recognized her as a rising star in the food and beverage industry, naming her to its annual 30 Under 30 list of the “brightest young entrepreneurs” and business leaders.

One of the things that drew her to bubble tea, Lamba said, was the variety, and the ability to customize practically every aspect of the drink, from temperature and toppings to ice and sugar levels.

“I think it’s just a fun drink, and it can appeal to a lot of people, especially college students, young adults, and professionals,” she said. “I love that there’s not really a drink out there like it. You have the texture of the tapioca, which is soft and chewy, combined with tea. It’s a creative drink, and I think a lot of people do fall in love.”

People familiar with the mall-kiosk version of bubble tea won’t notice too much in common with Gong Cha’s offerings. The tea is brewed every four hours, and the tapioca pearls are made fresh in each store, also every four hours.

Though the stores feature some seasonal drinks, the core menu is pretty consistent and “has probably 40 different customizations,” Lamba said. One of the staples is milk foam. If you’re thinking of the milk foam that traditionally tops lattes, think again: Gong Cha’s version is a slightly savory foam of milk and butter.

Lamba said Gong Cha was “one of the first bubble tea companies to do this cream topping,” and it’s responsible for the brand’s popularity in Asia. Her personal favorite drink, Milk Foam Green Tea, has brewed green tea on the bottom and is topped with the milk foam. 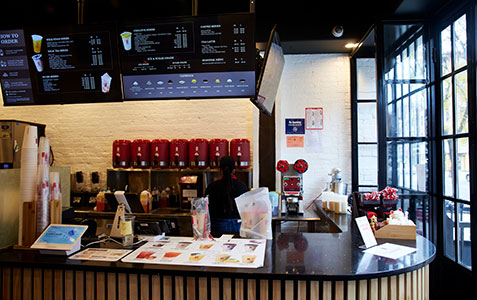 One of the most popular drinks, from the Milk Foam Series, is the Dirty Brown Sugar Milk Tea, which can fall anywhere on the spectrum from savory to dessert-like depending on how much sugar you want included in your drink.

From the Coffee Series, for people who can’t imagine giving up their daily brew, there’s the Dirty Brown Milk Coffee, made with coffee instead of black tea. Coffee, tapioca, and a buttery foam may sound like a combo made in misfit heaven, but it works.

The Hibiscus Green Tea, on the other hand, is light, fruity, and—thanks to the customizable sugar level—not too sweet. The Milk Foam Earl Grey Tea is a Taiwanese take on the classic London fog latte (typically Earl Grey tea and steamed milk) and features Gong Cha’s signature foam and fresh tapioca.

Customers craving something a bit different should try the caffeine-free Taro, made from a tropical Asian plant root reminiscent of sweet potato. From the brand’s Creative Series, the drink is a fun purple color.

As an undergraduate at Fordham, Lamba joined F.U.S.E., the Fordham University South Asian Entity, and served as president of the student-run club. She planned and marketed events for the campus community, coordinating with vendors and fellow students. Lamba said “having that entrepreneurial period” on campus helped her learn many of the leadership skills she relies on today.

“When we opened the store, it kind of brought me back to being here 10 years ago,” she said. “I’m grateful for the education I had at Fordham, and I think it did really set me up to become who I am and where I am now. It feels full circle in a way, to bring bubble tea and my business to the Fordham community here in the Bronx.”