skip to main content
Return to Fordham University
You are at:Home»Fordham Magazine»From Toledo to the Great White Way

Kevin Smith Kirkwood, FCRH ’99, one of the Angels in the Tony Award-winning musical Kinky Boots, credits his high school musical director for putting him on the path to New York City and a group of generous Fordham alumni for helping him become the first in his family to earn a college degree.

Growing up in the projects of Toledo, Ohio, Kirkwood started singing as a hobby, first at home, then in the gospel choir at his community church. He continued singing at St. John’s Jesuit High School, where as a student he coordinated the liturgical group under the guidance of Ron Torina, S.J., who headed ministry services and directed all of the school’s musicals.

He performed in musicals and plays throughout his four years at St. John’s. And he found a mentor in Father Torina. “He was the first person who told me I was really talented and should make a go of it.”In Kirkwood’s freshman year, Father Torina cast Kirkwood in Hello Dolly. “I had never seen a Broadway musical, didn’t know what it was,” he says, but “I was bitten by the bug there.”

During the fall of Kirkwood’s senior year, Father Torina accompanied a group of St. John’s students, including Kirkwood, on a trip to visit Fordham as part of a special program for admitted students. They toured the Rose Hill campus, stayed overnight in the residence halls, and met with Fordham students, faculty, and resident assistants.

“We were sold. I thought it was the college campus of the movies. I knew that I was home when I saw the city, the energy, all the different kinds of people coming together. I was excited by it and invigorated by it,” he says. “I never looked back.” 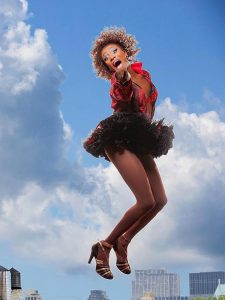 Kevin Smith Kirkwood as an Angel in Kinky Boots.

With a financial aid package of scholarship, loans, and grants, Kirkwood enrolled in Fordham College at Rose Hill and found his niche on campus when he became a member of the Mimes and Mummers, and helped revive the Fordham Glee Club, which had been inactive for decades. He also made his way to a Broadway show, seeing Rent with its original cast. “[My friends and I] were obsessed with that show,” Kirkwood says. “It was so new and fresh.”

While performing in shows for Mimes and Mummers and the Glee Club, Kirkwood also did work-study with the Fordham Phonathon and worked in the Residential Housing Office. Kirkwood relied on these on-campus jobs and his financial aid to help him pay for college, but in the summer before his junior year, he received his tuition bill indicating that his financial aid package fell short of covering costs for the year. Kirkwood was going to drop out of Fordham until he spoke with Stan Pruszynski, FCRH ’73, president of the Fordham Glee Club Alumni Association. “Stan said ‘we have money saved up for a future scholarship and we decided that you’ll be the first recipient.’”

“I’m so lucky and so grateful,” says Kirkwood, of receiving the Fordham University Glee Club Alumni Memorial Endowed Scholarship in Honor of Father Theodore T. Farley, S.J. “It’s an example of an act of kindness that can make a huge difference.” And with the scholarship, he could stay at Fordham. “I’m the first person on either side of my family to go to college. My family is so proud of me and I share that accomplishment with them.”

In 2013, Kinky Boots opened on Broadway with Kirkwood starring as one of the Angels, drag performers in the Blue Angel Nightclub. “It has a feel-good message,” Kirkwood says of the show, which is based on a true story of a struggling shoe factory owner who forms an unlikely relationship with a drag queen to save his business. The show, winner of six Tony Awards, including Best Musical, is “kind of a dream job,” he says.He won a part in the 2001 national tour of Godspell, and later, was in the cast of a European tour of Jesus Christ Superstar. He earned a New York Innovative Theatre Award nomination for Outstanding Lead Actor in It’s Karate, Kid! The Musical, and the New York Times called Kirkwood “fabulous” in his role of Bonquisha in the off-Broadway show How to Save the World and Find True Love in 90 Minutes. He made his Broadway debut in 2006, as an understudy in the Tony Award-winning The 25th Annual Putnam County Spelling Bee. “You work so hard and then you get that call and it’s the best feeling in the world,” he says.

When Kirkwood is not on stage, he volunteers with Broadway Cares, which helps raise funds for AIDS-related causes across the United States. “I have a strong sense of community—my Broadway community, my church community,” he says. “Fordham is all about community.”

He returned to the Rose Hill campus in May for his 15th alumni reunion—taking a night off from Kinky Boots to reconnect with his friends at the Jubilee Gala.

“I think how lucky we were to spend that time there. I’m really proud to be a Fordham alum. The pride of having finished [my degree]at a school with that caliber and reputation, it was a tremendous source of pride,” says Kirkwood, “and still is.”