skip to main content
Return to Fordham University
You are at:Home»Fordham Magazine»Features»From Pugsley’s to the Peace Corps: Joannah Caneda and Rob Gunther
Above: Joannah Caneda (left) and Rob Gunther in Ecuador, where they served together in the Peace Corps after getting married in November 2008.
The Bronx’s Pugsley Pizza (where “pizza’s good but love is it!”) may have been responsible for more Fordham romances than anyone may realize.

Take, for example, Joannah Caneda, FCRH ’06, LAW ’14, and Rob Gunther, FCRH ’06, who met at Rose Hill early their freshmen year, when Joannah offered Rob a slice of a Pugsley pie. He said yes. “It was a no-brainer!” he exclaims. And so was their relationship.

“I think as best as two 18 year olds can figure things out, we were just certain,” Rob says. “It was something that was just happening every day. It happened strong. It happened fast. And it continues to the present day.”

After the shared slice, they started dating and attended the President’s Ball together in October. “We made it official in McGinley,” says Joannah, citing the original location of the annual extravaganza. Similar interests fueled the connection. They both grew up on Long Island (although Joannah was born in the Philippines), and they each double majored in history and American studies. They worked on The Ram and at the Ram Van together (he was a driver; she worked in the office). They also participated in the Global Outreach program. It was their separate trips—his to Tijuana, hers to Mississippi—that got them interested in joining the Peace Corps together.

“Fordham’s mission of service and the service trips at the school planted the seed,” Rob says. “My worldview broadened.”

After graduating, they started the lengthy Peace Corps application process. At that time, couples who wanted to be stationed together had to be married for at least six months. So they wed in a civil ceremony in November 2008, followed by a church ceremony in May 2009. A few weeks later, they were on a plane to Ecuador. 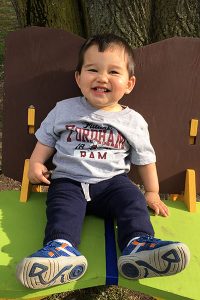 Joannah Caneda and Rob Gunther are looking forward to bringing their son, Robbie, to Rose Hill for Jubilee.

They were placed in a remote town 10 hours outside of Quito, where running water, electricity, and internet service were sporadic. “We relied on each other for a lot,” Joannah says. “The work-life balance is different in the Peace Corps because your work is your life, but … it was basically a two-year-long honeymoon!”

Among their Peace Corps projects, Joannah focused on child-maternal health, speaking in schools and the community about topics like diet and hygiene; Rob taught community members how to build eco-friendly toilets that could transform waste into compost.

Joannah took the LSATs in Quito so she could begin law school at Fordham when they returned in fall 2011. She’s now an associate at O’Melveny & Myers. Rob is working on his MFA in fiction at Queens College at night and caring for their 14-month-old son, Robert Joseph Gunther IV (aka Robbie), during the day. They’re looking forward to returning to Fordham to celebrate their 10th reunion during Jubilee weekend, June 3 to 5—and maybe even introducing Robbie to the pizza that started it all.

“I feel so grateful to have had the opportunity to go to Fordham. And to meet Rob,” Joannah says. “It led me on the path to the rest of my life.”