skip to main content
Return to Fordham University
You are at:Home»Fordham Magazine»From Intern to The Irishman: A Q&A with Producer Berry Welsh
Photo by B.A. Van Sise
Film and TV producer Berry Welsh, GABELLI ’07, had a breakout year in 2019. As the head of production and development at Tribeca Productions, he served as an executive producer on two critically acclaimed projects: Martin Scorsese’s film The Irishman, which was recently nominated for 10 Academy Awards, and Ava DuVernay’s limited series When They See Us, which was nominated for 16 Emmys and won two.

The projects explored, respectively, the true stories of Mafia hit man and Jimmy Hoffa associate Frank Sheeran, and the group of five teenagers who were falsely convicted and served between five and 12 years for the sexual assault of a jogger in Central Park in 1989. The company also recently wrapped on a feature, The Good House, a co-production with Amblin Entertainment starring Sigourney Weaver and Kevin Kline and based on Ann Leary’s best-selling book of the same name.

Since 2011, Welsh has been based in Los Angeles, where he lives with his wife, Emily Welsh, GABELLI ’07, and their two daughters. He often travels to and from New York, where Tribeca’s co-founders, Robert De Niro and Jane Rosenthal, are based.

Before Oscar nominations were announced, we spoke to Welsh about his work at Tribeca and the company’s two 2019 releases.

How did you get started at Tribeca Productions?
I started as an intern when I was still a student, working in Jane Rosenthal’s office during post-production on The Good Shepherd, which Robert De Niro directed and Jane produced. I’ll never forget the first week on my job as an intern. They invited me into a screening of an over three-hour cut to give notes, and I just thought it was the coolest thing in the world. To be able to see that process, it was exactly what I wanted in an internship. And then about six months into the internship, somebody left, and in February of my senior year at Fordham, when there was that opening, Jane turned to me as I was handing her a coffee and said, “Well, do you want a job?” And so I stepped up to work as her assistant. Fordham helped me make it happen so I could accept a job in February [and still graduate on time in May].

How did your academic experiences as a business student at Fordham lead you down the path to becoming a producer?
I started to build my electives around my interests. I think that was what started driving me more toward the storytelling path. I did take some screenwriting classes and film studies classes that were offered, to understand what I was really interested in. One of the required reading books was Bill Goldman’s Adventures in the Screen Trade, where he talks about all the movies he’s worked on. It’s just war stories from having been one of the greatest screenwriters working, and [he’s] candid about the interactions with people. I think that led me down a path of focusing exclusively on development and producing.

Can you explain what your day-to-day roles look like, both as the head of production development and as a producer or executive producer on individual projects?
A lot of what I do is working at that early idea stage and fostering the idea from its infancy into something that becomes a script, and then moving it into a position where you’re hopefully making progress to production. There’s a slate of projects that we pick to work on or that we generate. We’ve never had a business that’s about filling studio mandates or big volume. It’s really about projects that we’re passionate about, projects that matter and that we want to work on every day.

We also try to develop things that have impact, that will resonate and challenge someone to think differently and open up and see a bigger world perspective, whether that’s something that is about social justice or whether that’s something that’s just about the way that a person may approach a problem. Wizard of Lies [Tribeca’s 2017 film about Bernie Madoff’s financial fraud], which was one of the first projects that I set up as an executive, was really about betrayal on the greatest level and how that affected his family and victims who trusted him.

Did you feel like the story of When They See Us had not been told properly before?
I knew about the headlines of the story and had kind of a vague perception of the Central Park jogger case. I had seen the Ken Burns and Sarah Burns documentary [2012’s The Central Park Five]. I think what Ava aimed to do, and what I think we achieved, was to really tell the human side of the story, to be able to tell the story from the guys’ perspectives. These five boys that became men inside the system, who never got to have that growing up experience that was taken away from them. How they never really had a shot, how the legal system failed these five boys. Then ultimately how they became exonerated. To show that, yeah, there are flaws in the system [but]that history can be corrected, and you can change the narrative. I think that was always the promise of the project and what Ava’s vision was. 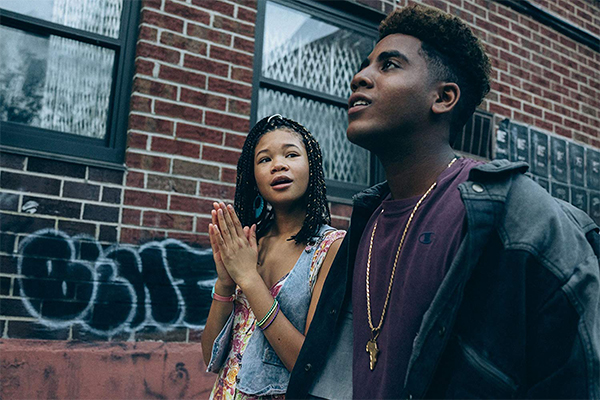 Storm Reid and Jharrel Jerome in When They See Us (Netflix)

It’s obviously a tough watch at times. Is that something that you have to think about when you’re in the production stage for a film or a show? Do you worry about a project being dark or bleak?
A lot of the projects that we work on, at least in the last five years or so, have all dealt with heavy subject matter in different ways. I think specific to When They See Us, there’s a pressure to tell the five men’s story right. The gravity of that probably sat with us as much as the emotional weight of what we were actually filming. It needs to feel authentic. That’s something that we look for in every project: an authenticity factor. How do we tell the version of this that’s worthy of the pursuit?

It’s not until almost 25 years later when the men actually get their day in court and become exonerated. In shooting it, we always knew it was going to be tough. Jharrel Jerome, our Emmy-winning actor who played Korey Wise, plays both the younger boy and also the grown man, which took a lot of strength, but we also thought about the toll it may take on the crew. A day on set is built around scenes that range in emotion. We looked into counseling services that could be available for our crew and for the actors. Jane is on the board of the Child Mind Institute, based in New York, and we consulted with them. The Actors Fund was an incredible resource that offered hotline services. Cast and crew could call in anonymously and talk with a psychologist about what you were feeling at the end of the day. We were filming in real working prisons. We saw people visiting loved ones in handcuffs.

I recognize when someone says a story can be tough to watch, but at the same time, producing something that you can’t look away from is worth the challenge. The goal is to empathize with these boys and their families and be moved by something you didn’t know about before.

To segue over to your other big release from this year, was there an overlap in production with The Irishman and When They See Us?
The Irishman actually shot before When They See Us. It follows my career at Tribeca growing into an executive and producer. I was reading drafts in development as an assistant. Now, almost 12 years later, the movie was released in theaters and on Netflix. We started prepping When They See Us as The Irishman wrapped. And we were also going through cuts of the Grammy Award-winning Quincy documentary that Netflix released [in 2018]. A lot of things were going on simultaneously. We like to have a slate of projects and push on to what’s next.

Robert De Niro and Joe Pesci in The Irishman (Netflix)

What has it been like working with Robert De Niro? Anything that would be surprising to folks who only know him from his onscreen roles?
He and Jane started the company together, so their production partnership is something that I’ve been able to watch for the better part of almost 13 years. So I’ve grown up in their company. It’s been kind of like a mom-and-pop shop. They’ve been very inclusive of me in the creative process, to be able to go from an intern to producing projects with them. It’s not lost on me how lucky I am to be able to earn the opportunity and also to bring in new projects that we produce together.

I don’t really like the term mentor. I’ve got really good role models. Seeing how the business worked and how to work it for yourself and to make things happen—the will and determination of a producer. Bob really pushed to get his passion project made with Scorsese on The Irishman—and Jane was right there pushing with him for those years. [She is] one of the leading producers working in the business, who has created a real home for storytellers. Not just from our producing work, but also in what they’ve done together with the [Tribeca] Film Festival.

Something unexpected is that there’s this family dynamic within the company. It’s this warm, small [environment]. We care about each other. We’re involved in each other’s lives and it’s not just a business.

You and your wife met as students at Rose Hill. Do you both still feel connected to Fordham?
Yeah, we met in a freshman theology class and lived in Queens Court—[it’s] kind of a Fordham love story. We also got married in the Church of St. Paul the Apostle, next to the Lincoln Center campus, since that was our first neighborhood. We lived near Columbus Circle and the Lincoln Center area after school. Fordham is kind of the root of all our experience, from having been college students, interns, and coming up in our careers together.