skip to main content
Return to Fordham University
You are at:Home»Fordham Magazine»Features»Friends from Distant Quarters: Celebrating Lunar New Year with Fordham’s Newest Alumni Group
Story and photos by B.A. Van Sise, FCLC ’05. Above: Mark Son, a 2010 Fordham Law graduate, and his son Aaron set off confetti poppers during Lunar New Year celebrations in Manhattan on February 12, 2022.
It begins with a roar: lion dancers are marching through the streets brigaded by drummers pounding away, snare and bass, with children smashing cymbals to their sides. It is nearly mid-February, the second weekend of the perennial Lunar New Year celebrations that roll across Gotham’s Chinatown every winter, and the parade up Mott Street is a carnival of color and noise; all of this is, by tradition, to scare away the bad spirits, the evil things that lurk around hostile corners, the menaces that loom large over all new years. The lion dancers, two aside in unwieldy costumes, are darting in and out of fish stalls, jewelry shops, any place with an open door and a want for blessing. One cannot hear the keening of demons scurrying out, but the whole thing is impressive enough that one is sure it must be happening.

Here, in a poorly lit first-floor food court on Mott Street, members and guests of the Asian American and Pacific Islander Alumni at Fordham Affinity Chapter turn their heads, suddenly, when the ruckus rambles through the door. Chinatown’s lions have arrived to let the Fordham Rams know about the Year of the Tiger.

Across two large tables, this sprawling, multigenerational group is united by some shared heritage and a lot of shared history: Their families came from China, Korea, and Burma, and now they’ve brought their own spouses and children to dine over char siu bao, congee, rice noodles with dried shrimp, sesame balls with red bean paste, fry bread, and kimchi. Tea tops the table all over: some steaming, some iced with boba bubbles. 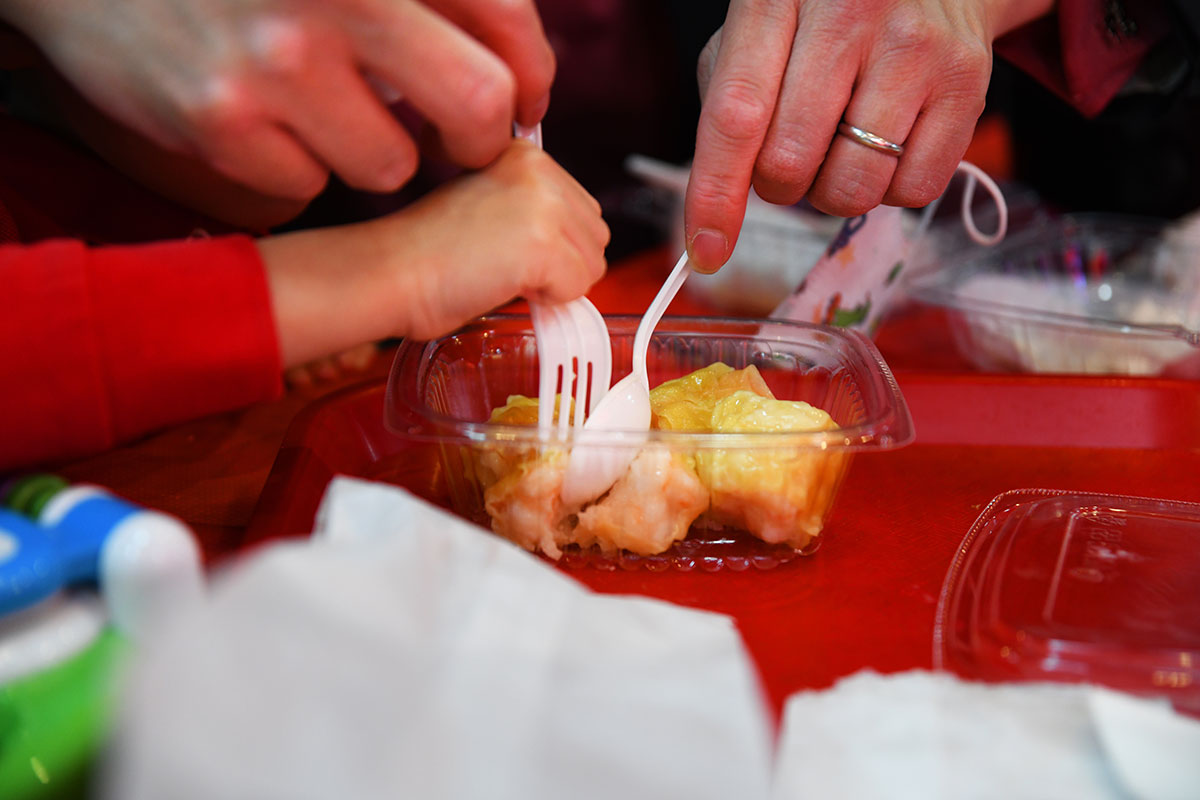 Everyone here has some connection to Fordham University. Sure, the school was founded in 1841 primarily for Irish, Catholic immigrants by an Irish immigrant who became the first archbishop of New York, but today it’s everybody. “Is it not delightful,” Confucius asked more than two millennia ago, “to have friends coming from distant quarters?” Some are alumni, some are current students; one man, a Navy lifer, is here just because his two kids went to Fordham and he’s proud about it.

The group formed just a year ago, but that’s not surprising: The pandemic period has been particularly turbulent for Asian Americans, with sporadic incidents of anti-Asian aggression growing more and more frequent. The FBI estimates a 73% increase in such events across the country in 2020, with many of them occurring in New York City. This has led to waves of protest and acts of solidarity amid concerns about how anti-Asian bias is affecting young people in particular.

“I got involved last year,” says Mark Son, a 2010 Fordham Law graduate and one of three co-leaders of the group, which was founded by the Hon. Christopher P. Lee, FCRH ’71, LAW ’79. “I was worried about the anti-Asian-American hate crime. I think it was very important to do this sort of work, trying to keep a voice present in the conversation.”

Son, a principal law clerk with the New York State Supreme Court in the Bronx, views the community and its foundation as a building block to social justice, growth, and learning. “Students had expressed concern,” he adds, “and we wanted alumni to create a network. Even within the Asian American community, we have different subsets: Chinese, Koreans—Kyaw,” he points to Fordham senior Kyaw Hein, eating pork dumplings and listening in on the conversation—“is from Burma. We have a guy from Tonga. So it’s a learning experience for us, as well.”

Edwin Wong, another co-leader of the group, notes how much things have changed from the time he earned an M.B.A. at Fordham’s Gabelli School of Business. “In 2004, it was getting there,” he says of the University’s growing Asian American population, “and now we’ve got lots of Koreans, Chinese, Filipinos, and South Asians—a distribution list of more than a thousand people. Before, people took it for granted, but now people are getting engaged with the community.” 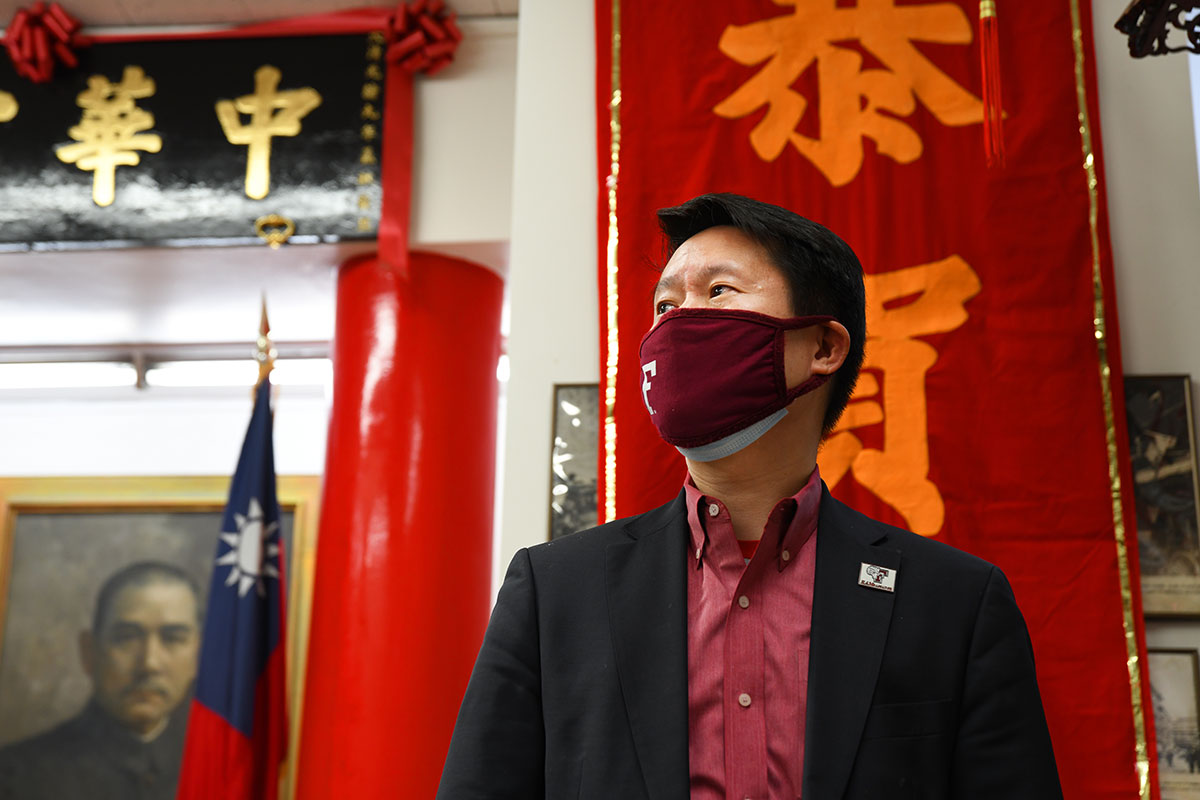 Edwin Wong at the Chinese Consolidated Benevolent Association in Manhattan. He co-leads the Asian American and Pacific Islander alumni group, along with Mark Son and J. Iris Kim, GABELLI ’07.

While at Fordham, Wong says he started what he calls the Fordham Asian Business Network for students and alumni eager to draw on the collective strength of a growing community in a shrinking world. “You need a network, so I started that,” he says, noting that he and many of the alumni in the group would love to see Fordham launch an Asian American studies program that would grow to become as prominent as the University’s departments of African and African American and Latin American and Latino studies, which have their roots in the late 1960s. (This work is already underway: With support from two University grants—an Arts & Sciences Deans’ Challenge Grant and a Teaching Race Across the Curriculum Grant from the chief diversity officer—a group of 10 Fordham professors is developing a curriculum for a minor in Asian American studies.) Son says that he looks forward to seeing “a community that’s more welcoming,” with more Asian Americans teaching as professors and in leadership positions.

With their small children bedecked in maroon college apparel, some toddling if they’re able to walk at all, the alumni say they plan to return to the neighborhood in just a week, when the largest new year celebrations will kick off. “My hope is that in the future,” says Wong, “we could have a Fordham group march in the larger Manhattan Lunar New Year parade, the same way that Fordham participates in the annual St. Patrick’s Day Parade.”

After lunch, they all move through streets chockablock with onlookers and revelers wearing masks, playing games, throwing small fireworks against the sidewalk, and shooting off confetti poppers. The group rambles through the narrow lanes, lingering on Bayard Street, home to many iconic businesses such as the Mei Lai Wah Bakery and the Chinatown Ice Cream Factory. At the Chinese Consolidated Benevolent Association, President Justin Yu welcomes the group, offering them—you guessed it—more food. They talk about both Fordham and their community’s future in a changing world for Asian Americans while nibbling on sweet sponge cake.

It’s not hard to see, as parents unwrap snacks for their littlest, who they have in mind. After all, it’s a new year. 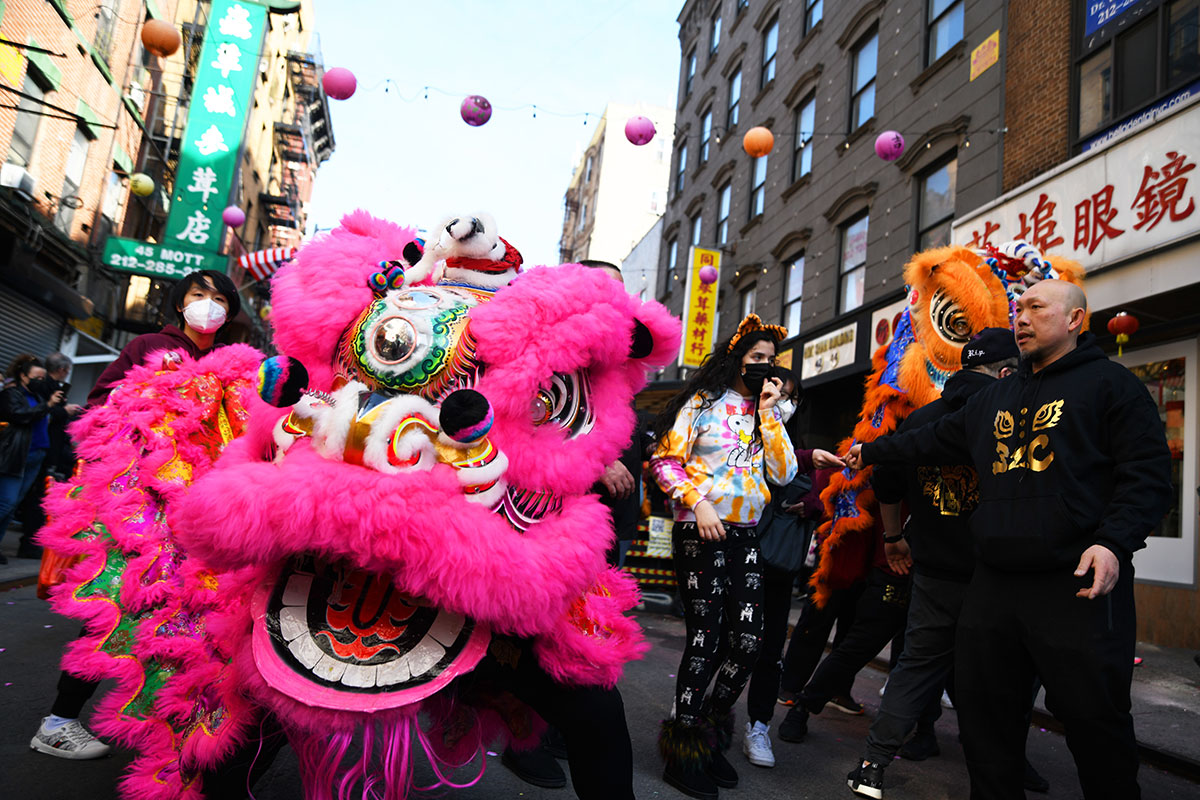 Learn more about the Asian American and Pacific Islander Alumni at Fordham Affinity Chapter on the group’s web page and its Facebook and Instagram accounts.