skip to main content
Return to Fordham University
You are at:Home»Fordham Magazine»Alumni News»Four Oscar Nods for Fences, Starring and Directed by Denzel Washington
Above: Denzel Washington (center) and his co-star Stephen McKinley Henderson (right) in a scene from “Fences.” Henderson taught at Fordham last fall as the Denzel Washington Chair in Theatre, an endowed position Washington created with a gift to his alma mater in 2011. (Photos by David Lee, Paramount Pictures)
Fordham alumnus Denzel Washington, FCLC ’77, has received an Academy Award nomination for his starring role in the family drama Fences. The film, which he directed and co-produced, is also up for best picture. It’s set in 1950s Pittsburgh and centers on Troy Maxson, an embittered former athlete—played by Washington—and his strained relationship with his wife, Rose, and their aspiring-athlete son. 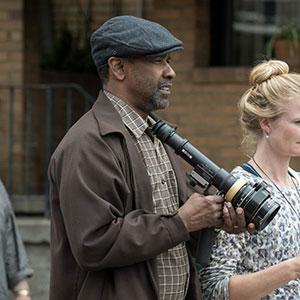 Denzel Washington directed and co-produced “Fences,” in addition to starring in the film.

If Washington wins his third Oscar on Feb. 26, he’ll join a select group of actors—so far, nine—who have won a best actor Tony and a best actor Oscar for playing the same role. He originally played Troy Maxson on Broadway in a 2010 revival of Fences. Producer Scott Rudin had approached him about creating a film version of the story, but Washington demurred, saying he wanted to bring the play to the stage first.

After Fences became an award-winning success on Broadway, taking home three Tonys, Rudin followed up with him again about bringing it to the screen, Washington said in an interview with Good Morning America producer and livestream host Will Ganss, FCRH ’14.

“I ran for another four years until he cornered me,” Washington joked, “or until I felt comfortable enough to give it a shot.”

Washington called Wilson a “brilliant, brilliant writer” in the interview with Ganss. “It’s a gift to be able to interpret his material, to bring it to film.” And he said he’s seen some strong emotional reactions to the story. “You just don’t know how it’s going to affect people or where it touches them.”

One of Washington’s co-stars in the film is Stephen McKinley Henderson, who taught at Fordham last fall as the University’s Denzel Washington Chair in Theatre—an endowed position Washington created with a gift to his alma mater. While Fences was written in 1987 and is set in the 1950s, its story is timeless, Henderson said last year in a Fordham News interview.

“It was clear [Wilson] saw the beauty in people, and he wanted to make sure the rest of the world saw what he saw,” Henderson said. “It’s a classic, and a classic is something that is never finished saying what it has to say.”