skip to main content
Return to Fordham University
You are at:Home»Fordham Magazine»Fordham’s ‘Beautiful,’ ‘Safe’ Campus Helped Lucy Lopez Thrive—Now She’s Paying It Forward
Photo courtesy of Lucy Lopez
Today, Lucy Lopez, FCRH ’89, is McKinsey & Company’s deputy general counsel and head of legal for the Americas, overseeing a team of dozens of legal professionals for the management consulting firm. She has a love of learning and languages, of mentoring new talent and helping shape tomorrow’s leaders. But when she arrived in the United States from the Dominican Republic at just 8 years old, she was focused on one thing: fulfilling her mother’s desire that her children have access to the education and opportunities that she didn’t enjoy.

“We arrived on August 26. And right after Labor Day, I started the third grade,” Lopez said. “I didn’t really speak English. I didn’t really know what was happening. We didn’t really have a network, and we had to do a lot on our own.”

Being on their own was new. Though she’d grown up with 12 siblings in the Dominican Republic—each of her parents was married and had six children before they met each other—she arrived in New York City with only three family members: her mother, one brother, and one sister. The rest of the family stayed put while the four of them set up a home in the U.S.

The family settled in the Inwood area of Manhattan, home to “a large Dominican contingency” that allowed Lopez to remain connected to her cultural roots while trying to bridge the gap “between being a Dominican and being an American,” she said.

Part of the network she developed, as a newly arrived third-grader attending public school, ultimately led her to Fordham. Lopez attended John F. Kennedy High School in the Bronx with a “dear friend from the third grade.” The two were discussing where they wanted to attend college when the friend asked her to tag along for a visit to Fordham’s Rose Hill campus.

“I came in through that entrance on East Fordham Road, [past]the gate, and onto that pathway that leads up to [Duane] Library, and I’ve never seen anything more beautiful in terms of, ‘Wow, this is what a college looks like, a university,’” she said.

Not only did Lopez fall in love with the campus, but she also said it immediately “felt so safe to me after coming from a Bronx high school where girls felt quite unsafe. I just very much immediately felt at home in an odd way.”

Finally afforded a “chance to really learn,” Lopez said her Fordham experience wasn’t filled with many extracurricular or community activities. Instead, the academics alone made her feel that she was finally getting what she “came here to this country for.”

As a psychology major, Lopez enjoyed studying the human mind—delving into “some of the mental issues that people in society face, and how people deal with them”—and she threw herself into preparing for her next step: law school.

“I knew that I needed to have very good grades to get into law school, so I spent a lot of time in Duane Library studying to get the best possible,” she said. “It was the academic deep dive that I was sort of waiting to have all my life.”

She found another love at Fordham, too: her husband, Ray Garcia, FCRH ’89. They met in a class as first-year students, and after some relentless note-passing, Lopez agreed to go out with him. “The first few weeks of school, classmates would send a little note up from the back row where he sat to the front row where I sat.” She usually declined his invitations, but “after a while I just decided, OK, I guess I’m going to go on a date,” she said, “and so that was the beginning.” 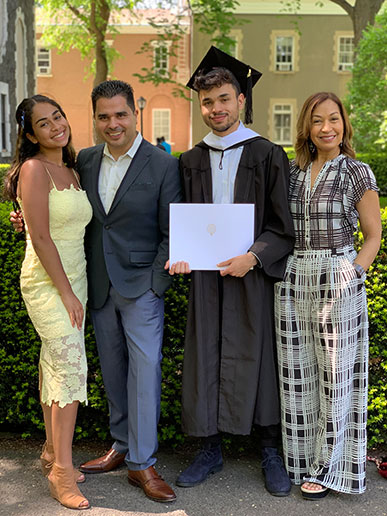 They were eventually married in the University Church, with longtime Fordham sociology professor Joseph Fitzpatrick, S.J., presiding, and they have two children: a son, Nicholas, who graduated from Fordham College at Rose Hill in 2019, and a daughter, Giselle, who is currently attending George Washington University.

After earning her B.S. from Fordham, Lopez earned a J.D. from the University of Pennsylvania in 1992 and has been practicing law ever since. For the past 23 years, she’s worked at McKinsey & Company, but soon she’ll take over as general counsel and chief legal officer at Spencer Stuart, an executive search and leadership advisory firm, in what she described as a dream role.

“One of the things I love doing is leaning into the development of people because we can all be really smart and really capable, but if we’re not investing in people and their growth and their excitement, and we’re not making them feel like they’re part of something special, I’m not sure we’re accomplishing very much,” said Lopez, who was honored as a Latina Trailblazer in 2018 by the nonprofit advocacy group LatinoJustice.

The imperative to invest in young talent to create future leaders isn’t one that’s limited to Lopez’s legal work; she thinks ensuring that current and future students can thrive is one of her duties as a Fordham alumna: playing a role so that “other students have the benefit of the experience I had.”

“Fordham taught me how to think differently and focus on being a good human and a student of life, not just a student for four years. To focus on doing good things and service and living in service.” There’s something more that comes with being a Fordham graduate, she said: “It’s something broader; it’s about purpose.”

What are you most passionate about?
Making the community in which I live and work better. One of the ways in which I do this is through my involvement in Big Brothers Big Sisters of New York, both as a member of the board of trustees and as a mentor. I have mentored several young women since they were in high school, and they are all moving successfully to the next chapter in their lives. Seeing kids succeed is awesome!

What’s the best piece of advice you’ve ever received?
My mother told me to get the best education possible because it would be the path to a better life. She was right.

What’s your favorite place in New York City? In the world?
My favorite place in New York City is the neighborhood I grew up in, 215th Street and Seaman Avenue, tucked in the most northern part of Manhattan near Inwood Hill Park. What a gem of a neighborhood. I love the stairs that connect Broadway to Park Terrace East, built in 1915 and a great reminder of the world before the automobile. My favorite place in the world is Italy. I love the food, culture, people, and variety of landscapes. Somehow, I feel very much at home there. I’ve dragged my children there several times, starting when my youngest was 5 years old. It’s never too early to learn a different culture.

Who is the Fordham grad or professor you admire most?
I admire many Fordham professors who opened my eyes to the world, including “the Notorious Ph.D.,” Mark Naison; Raymond Grontkowski, Ph.D.; Joseph Fitzpatrick, S.J.; and Claude Mangum, Ph.D. There is one [grad]who stands out above the rest: my husband, Ray Garcia. Ray has been a huge supporter of everything I’ve tried to do professionally since we both graduated from Fordham. He has been my biggest fan, and I admire him for his willingness to sacrifice so much so that his partner can shine. Thank you, Ray! You embody everything that is good and genuine in this world.

What are you optimistic about?
The ability of young people to change the trajectory of the world we live in. This next generation of leaders is less patient and hopefully will not tolerate injustice for as long as prior generations have. I am optimistic that new leaders will demand more, as they should.