skip to main content
Return to Fordham University
You are at:Home»Fordham Magazine»Alumni News»Fordham Graduate Marisa White, Award-Winning Bronx TV Producer and Educator, Dies at 54
Photos courtesy of the White family and Lehman College
Marisa White, FCRH ’88, a TV producer and educator who empowered Bronx students and community members to tell stories that matter to residents of the borough, died on July 21. She was 54.

“She was just so vibrant—if you knew her, she just had this wonderful energy about her,” WFUV news director George Bodarky, FCRH ’91, said of White, who spent more than two decades as a producer and, later, director of creative services for BronxNet, a cable network that specializes in public affairs programming by and for the people of the Bronx.

For the past few years, Bodarky worked closely with White on Bronx Connections, a collaboration between BronxNet and WFUV, as well as Norwood News, that allows Fordham students to get experience in TV news production and helps WFUV—Fordham’s public radio station—reach new audience members in the Bronx. Through the show, students have produced reports on gun violence, the legalization of marijuana, and the 2020 election.

Bodarky said that White exhibited “such a strong commitment to educating students.” She also helped him when BronxNet turned his weekly WFUV program, Cityscape, into a television show.

“She worked really hard to set people up for success, including myself,” he said. “I’m a longtime radio person, but Marisa came out on a shoot with me and she gave me tips and advice about being in front of the camera and making it natural. She wanted to help people be the best that they could be.”

White, who grew up in the Bronx, graduated from Fordham College at Rose Hill in 1988. She began working at Cablevision while still in school, working her way up as a videographer and production coordinator. She joined BronxNet in 1994, soon after the network’s inception in 1993. She earned a New York Emmy award for her work as a producer of the video series Best of the Bronx, and served as the network’s intern coordinator before being named director of creative services in 2015. 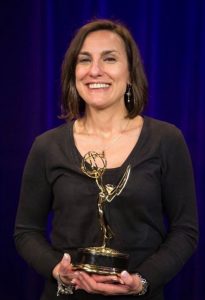 In that role, she oversaw BronxNet’s signature shows, such as BronxTalk and Bronx Live! She also was a lecturer in media studies at Lehman College, where BronxNet is headquartered. In all of her roles, one of her main passions was working with young journalists, including high schoolers.

Beth Knobel, Ph.D., associate professor and director of the public media master’s program at Fordham, said that she first met White in 2007 or so, when she went to BronxNet to talk about internship opportunities for Fordham students.

“I just remember my first impression of Marisa was that she was an absolute powerhouse,” Knobel said. “BronxNet is an absolutely amazing organization—it’s a huge team, and there’s just so many people doing so many things that, I think, it would overwhelm most people. But Marisa was like this island of calm in this incredibly active and slightly chaotic world.”

Bodarky said that all of the students who worked with White were able to not only gain experience in television but also take away some of her energy.

“I think what she really did for them—beyond what we could afford them at WFUV—was give them an opportunity to learn the ins and outs of television news, reporting, television show production,” he said. “Also, her enthusiasm and excitement for the industry—I think it’s something else that was infectious and, I think, hopefully also spurred them to be more excited about what they were doing.”

Knobel said that White helped teach students about loving their work and the community where they do it.

“She did so much to get our students excited about doing television, and to help them do it better,” she said. “She made her students fall in love not just with television but with the Bronx.”

A Legacy of Giving Back and Caring

Knobel and Bodarky said that White was committed to Fordham and saw working with WFUV students as a way of giving back to the University.

“I think that her experience as a student at Fordham was deeply influential to her,” Knobel said. “And she seemed to leave the University with a feeling that she wanted to give back and she did give back, and that’s a beautiful thing to emulate.”

Bodarky said that he will miss her expertise and her passion for providing “more in-depth coverage of an underrepresented community.”

“And her smile,” he said. “She always would greet you with a huge smile and a great sense of [being]so happy to see you. She really made you feel valued.”

White is survived by her husband, Raymond White, and two daughters, Amelia and Tessa.