skip to main content
Return to Fordham University
You are at:Home»Fordham Magazine»Features»Fordham Foodies Bring the Heat in the Kitchen
Above: Gabelli School seniors Bentley Brown (left) and Jake Madsen. Photos by Bruce Gilbert
Lots of college students cook casually in their dorms or apartments. A stir-fry here, a pasta dish there. But few rise to the level of Jake Madsen and Bentley Brown. When these Gabelli School of Business seniors set out to cook you a meal, they pull out all the stops. On the menu on a recent fall evening: spicy carrot soup, steak au poivre, striped bass, and octopus.

The pair often throw spontaneous dinners for large groups. But on this rainy night they were expecting just a few friends. In their off-campus Bronx apartment, Otis Redding and Van Morrison tunes played, candles flickered, and their kitchen radiated warmth and a scent that was just barely sweet. Madsen was prepping the first course.

“I’m just making something to get you guys started,” he says to a guest, straightening up from the oven, where he’d been inspecting his loaf of sourdough. “I got into breadmaking last year. It’s really fun, because sourdough has a science. You have to create lacto-fermentation, you have to harvest your own yeast,” says the son of a chemistry teacher. 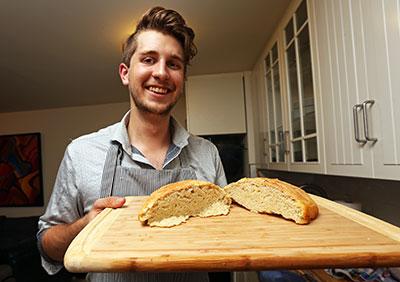 After quickly spraying some water into the oven to maintain humidity, he notes, “I’m working on perfecting crust. I remember being a little kid saying I don’t like the crust—now I’m so excited about crust!”

Madsen and Brown lived across the hall from each other freshman year and became fast friends, bonding over, among other things, their love of cooking. They moved in together last year, along with two other Gabelli students. They were excited to find an apartment with a nice kitchen and separate dining space, as well as a sprawling outdoor patio.

“We called this apartment ‘the Dream,’” Madsen says. “Other places were a little closer to campus, but we said, ‘this place has granite countertops!’” They’ve hosted large barbecues with homemade-barbecue-sauce ribs and live bands on their patio, as well as more low-key indoor gatherings. Last year, they had about 40 people over for a “Friendsgiving” feast—which included a 15-pound turkey and 15 pounds of ribs. 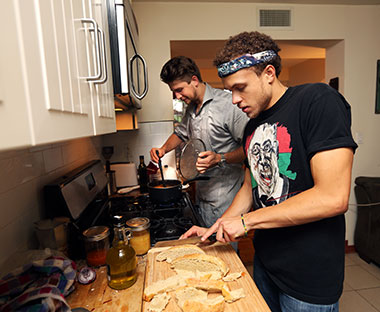 While he waits for Brown to come home with the evening’s main ingredients, Madsen gets to work on his spicy carrot soup, which he makes with carrots he picked from St. Rose’s Garden on the Rose Hill campus, where he volunteers. He’s also using some selects from his big batch of red and green peppers—spicy and sweet—which he grew himself. He dices and slices, tossing ingredients into the blender while keeping an eye on his bread. Soon he’ll plate them together—the sourdough ready to soak up the piping hot soup.

Brown arrives laden with packages from Arthur Avenue, where he and Madsen shop “almost exclusively.” He unwraps a thick, bright-red cut of beef from Vincent’s Meat Market (the “best butcher shop in the Bronx,” he says) a large silvery striped bass, and a slippery whole octopus, which he will confidently drop into a pot of boiling water. 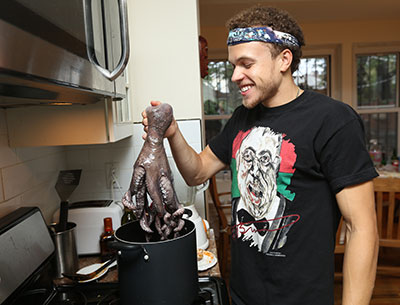 Brown says he developed his culinary skills when he was a child. “I’m a really picky eater, so I cooked for myself,” except for when his father made southern food. “I made my own eggs—put stuff in them that I liked.”

Despite being busy college students and gourmet chefs, both young men have significant work responsibilities. Brown’s late father was an artist—a painter known for his portraits of jazz and blues musicians—so Brown works with museums and galleries that show his father’s work. He’s also on the executive board of ASILI—the Black student alliance at Fordham—and is a research assistant with Fordham’s Bronx African American History Project. Madsen works as a bookkeeper in his father’s real estate development firm, which brought him to Australia for the summer to work with a client. Both students are studying entrepreneurship at Gabelli.

With so much going on, one wouldn’t think there’d be time for such epicurean endeavors. But the roommates say that cooking helps them “de-stress.” Also? “We just really love doing it,” says Brown, who, truth be told, is not a total amateur. He worked for a time for a chef in Arizona who’s now working in France. His favorite thing to cook? Coq au vin. 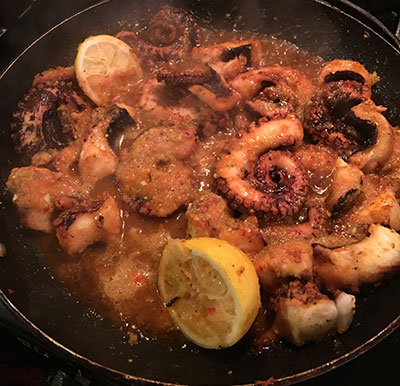 With his creamy peppercorn sauce simmering, the octopus boiling, and the steak in the oven, Brown sits at the dining table with his laptop open. “Sorry, I’m finishing a paper,” he says. It’s midterm time so he must multitask, but he’s not worried that anything will burn or boil over. “At this point, I’ve been cooking so long I have an internal timer.”

Meanwhile, Madsen’s got his mind on his peppers and how they might complement the octopus.

“Can I make the sauce, Bentley? Please, please?”

Brown gives him the OK. “Jake loves sauces,” he tells a guest.

Madsen heads to the stove. “This sauce is new—today,” he declares. He concocts a thick, sweet and spicy sauce using passion fruit juice, pineapple chunks, vinegar, ketchup, and several treasures from St. Rose’s Garden, including tomatillos and cayenne, scorpion, and Tabasco peppers. 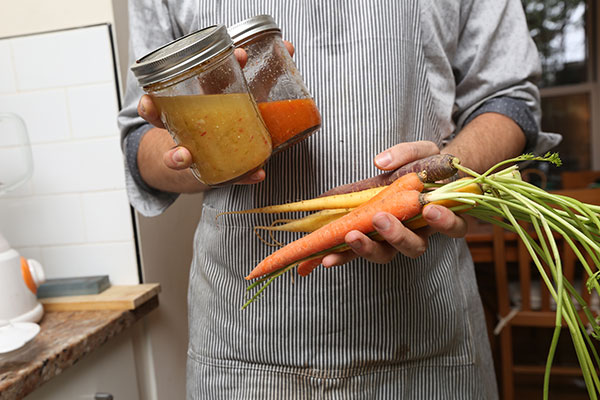 Madsen uses his peppers to make batches of hot sauce, which he always keeps on hand. After a friend gave him a Carolina Reaper plant—which yields the hottest pepper in the world—he decided to challenge himself. “I said, ‘I’m gonna make a hot sauce that uses Carolina Reaper that isn’t masochistic.” His finished product uses mango, pineapple, ginger, and lime, and as promised, does not set the mouth on fire. (Though it’s still got plenty of kick.)

Soon friends are trickling into the apartment, and everyone’s sitting down to eat. Eleni Koukoulas, a Gabelli School senior, said she’s been over once or twice before to eat with the Fordham foodies.

“It’s not very conventional college,” she says. “You could just tell it’s something they really love, and that they love to share it with other people.”

As everyone digs in, Brown hears one of his other roommates come in the front door. “Hey, Phil,” he shouts. “Come get you some food!”