skip to main content
Return to Fordham University
You are at:Home»Fordham Magazine»Features»Fordham College at Lincoln Center Graduate Remembered as Friend to Everyone
In 2016, Ian Schaefer (middle) chats with Joseph M. McShane, S.J., then president of Fordham. Photo by Ryan Brenizer.
Ian Schaefer was known for being a friend to everyone, everywhere he went—from his hometown of Rochester, New York, to his adopted city of Milan, Italy. That’s one of the many reasons his family and friends say he will be missed. Schaefer, a 2016 graduate of Fordham College at Lincoln Center, died of cancer on June 6, 2022. He was 27.

“He never let [his cancer diagnosis] get him down—he lived life to the fullest,” his mother, Roberta Schaefer, said. “That’s the kind of guy he was. He charmed whole wings of the hospital [and] they showed up at his memorial Mass because he showed up with kindness all the time.”

Schaefer earned a B.A. in history from Fordham with a minor in theology in just three years, and he left his mark on the University and its community in numerous ways. After participating in Urban Plunge, he helped lead the pre-orientation program that gives first-year Fordham students a chance work with community partners on service and social justice projects as they get to know the city. He also worked as a service leader for the former Dorothy Day Center (now known as the Center for Community Engaged Learning); a resident assistant; and a dedicated employee of the Church of St. Paul the Apostle, across the street from the Lincoln Center campus. 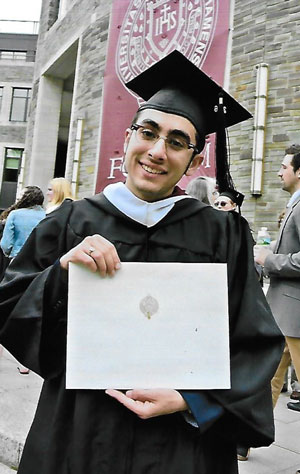 Dylan Penza, FCLC ’16, said that Schaefer helped him get him a job at St. Paul’s, and their friendship changed his life.

“Being his friend helped me like myself more,” Penza said. “I couldn’t believe that a dude that kind, that nice wanted to hang out with me, especially at the beginning of college [when] I was pretty cold, detached, and distant from people, and I was sort of going down a path I didn’t really love. Him getting me that job and him being one of my friends—it really helped me to start to figure out what parts of me I liked and what parts I wanted to grow.”

Penza said that Schaefer excelled at being there for others. He recalled a time when the two of them were working a shift together at St. Paul’s, and a couple of tourists from Eastern Europe who didn’t speak English came in to find help because they were lost.

“Ian pulled up Google Translate and helped these tourists figure out where they were going, and he didn’t even bat an eye,” Penza said. “That’s just the kind of guy he was.”

Magoon described Schaefer’s “care for others” as “infectious.”

“He made you want to care for others as much as he cared for you,” he said. “He was just this fantastic person, fantastic man—he made you feel good just from the slightest interaction with him.”

‘The Mayor of Rochester’

After graduating from Fordham, Schaefer earned his master’s degree in public administration from the SDA Bocconi School of Management in Milan, Italy. He then returned home to Rochester—in part due to his cancer diagnosis, according to his mother—and worked as an assistant to the chair of the Department of Foreign Languages and Literatures at Nazareth College and then as an office clerk for the town of Brighton, New York.

“He befriended a chef in the cafeteria and they became, of course, lifelong friends,” Jack Schaefer said.

The whole family went to visit the chef for dinner at his home, and they were walking back to their hotel late at night when they saw someone walking toward them. Jack Schaefer said the streets weren’t well lit, and he didn’t know where he was going, so he felt a little apprehensive.

“All of sudden this guy raised his hand and yelled, ‘Ian!’ with a smile on his face and came over and chatted,” he said. “Thousands of miles from home, late at night, my son finds a friend.”

Penza said that was par for the course when going out with Schaefer.

‘A Gentleman and a Scholar’

Faculty and administrators also remember Schaefer as a joy to be around, as well as an excellent student. 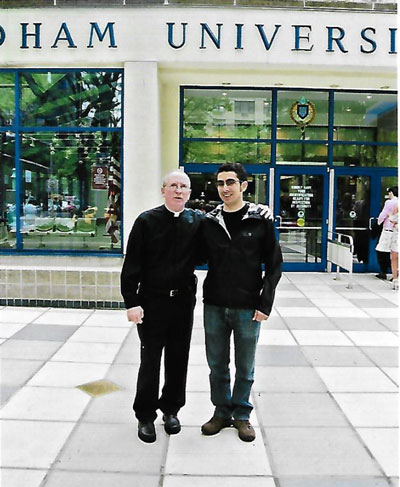 “I was privileged to know Ian at Fordham and to enjoy his intellectual curiosity and his joy of life which was so infectious,” said Vincent DeCola, S.J., assistant dean at the Gabelli School of Business. “From winning ‘Freshman of the Year’ to being a welcoming presence on campus, Ian united our community by the love he manifested to all.”

Joseph Desciak, Ph.D., former first-year dean at Lincoln Center and now an associate dean at Boston College, said that Schaefer was “the most extraordinary student I’ve known at Fordham.”

“His love of humanity and welcome to all persons was both an inspiration and gift. He was a gentleman and scholar. He was always the same: a loving, brilliant, compassionate man. He’s changed me for the better, and I will always be grateful for our friendship.”

Schaefer also interned at America magazine, a Jesuit publication, where he worked with James Martin, S.J., its editor-at-large.

His mother said that Schaefer had recently been rereading one of Father Martin’s books, The Jesuit Guide to (Almost) Everything, with his girlfriend, Emmarae Stein. She is currently in the process of becoming a Catholic, Roberta Schaefer said, and asked the Schaefers to be her godparents.

“She’s been amazing to our family,” Roberta Schaefer said. “Ian’s memory lives on—he grew our family even after he was gone.”

Schaefer is survived by his parents, John and Roberta Schaefer, and his girlfriend, Emmarae Stein.