skip to main content
Return to Fordham University
You are at:Home»Fordham Magazine»Alumni News»Fordham Alumni Named to Diversity, Equity, and Inclusion Hall of Fame
Above (from left): Valerie Irick Rainford and Patricia David
Inclusion magazine has recognized two Fordham graduates as “trailblazing leaders who wrote the playbook for implementing” diversity, equity, and inclusion values and practices in the workplace.

Fordham trustee Valerie Irick Rainford, FCRH ’86, and Patricia David, GABELLI ’81, are among the eight executives in the magazine’s Diversity, Equity, and Inclusion (DEI) Hall of Fame Class of 2023. 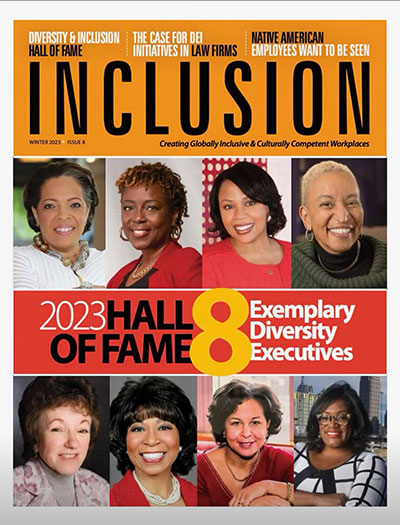 In her “Last Word” column in the winter 2023 issue of the magazine, Sheila A. Robinson, the founder Diversity Woman Media, noted that Rainford, David, and the other honorees “began this work before there even were titles like chief diversity officer.”

“While we still have a long way to go and much work to do, now is the time to salute those women and men on the front lines who have made a difference. … They paved the way for the rest of us,” Robinson wrote, “and their tireless work in the trenches of the battle for equity, inclusion, and belonging is why I feel optimistic for the next generation.”

A ‘Pay-It-Forward Commitment’ to Elevating People

David, who was born in England and grew up in the Bronx, graduated from Fordham’s Gabelli School of Business in 1981 with a bachelor’s degree in finance and economics and a minor in accounting. She capped a decades-long corporate career at JPMorgan Chase, where she served as the chief diversity officer and was instrumental in launching the company’s Advancing Black Leaders strategy and its Office of Disability Inclusion, which she described as her proudest achievement.

“Disability can and will affect everyone,” she told Inclusion magazine. “Raising awareness, busting the myths, and being intentional about this community was personally refreshing to me.”

The magazine also noted David’s “pay-it-forward commitment” to supporting students at Fordham, where she has “led large-group diversity education sessions for first-year students” at the Gabelli School of Business and supported a high-school pipeline program to help bring more students of color to Fordham.

In 2016, she received an honorary doctorate of humane letters from Fordham and delivered the keynote address at the Gabelli School of Business graduate diploma ceremony. One year earlier, the Gabelli School paid tribute to her by creating the Patricia David Trailblazer Award, presented annually to a graduating senior who has demonstrated a dedication to inclusiveness in the business world.

Since retiring from JPMorgan Chase in 2018, David has been working as a mentor, coach, and consultant. She also recently published a book, The ‘Her’story of Davidisms: My Straight-Shooting Answers to 30 Years of Career Questions People Have Asked Me (Picard Press, 2021).

Like David, Rainford grew up in the Bronx and eventually worked at JPMorgan Chase, where she was a managing director and led the company’s Advancing Black Leaders strategy.

“Under her leadership, representation of Black professionals rose to historic levels, with an increase in Black senior executives by over 50 percent in three years,” Inclusion magazine reported.

Prior to her tenure at JPMorgan Chase, she had a 21-year career at the Federal Reserve Bank of New York, where she was the first Black woman to rise to senior vice president. Today, as the founding CEO of Elloree Talent Strategies, she advises C-suite executives on the best strategies for advancing diverse talent.

She is also the author of an award-winning memoir, Until the Brighter Tomorrow: One Woman’s Courageous Climb from the Projects to the Podium (Eloree Press, 2014), and a founding member of the Black Women for Black Girls Giving Circle. She has received numerous awards and distinctions, including recognition on Black Enterprise’s list of the Most Powerful Women in Business and on The Network Journal’s list of 25 Most Influential Women in Business.

Rainford has been a generous supporter of Fordham and its students. She joined the University’s Board of Trustees in 2019, and in early 2021, she was the driving force behind the creation of the Diversity Fund, which provides financial aid to economically disadvantaged undergraduates and those from underrepresented groups who are living on campus.

“I want my legacy—from struggle to success—to challenge long-standing assumptions and expectations for what talent from underserved communities can achieve when provided with access and opportunity,” she told Inclusion magazine.