skip to main content
Return to Fordham University
You are at:Home»Fordham Magazine»Folk City: New York and the American Folk Music Revival
Above: Musicians in Washington Square, April 1962, a year after their successful protests against a ban on playing music in the famous Greenwich Village park.
Photos courtesy of the Museum of the City of New York
If you’re old enough to remember the scene, the Folk City exhibit at the Museum of the City of New York might bring you back to the 1960s clubs of Greenwich Village, with its dim lighting, concert bills on the walls, and steady hum of guitar and passionate harmonies. But the show offers up history that goes beyond those clubs’ walls, shedding light on how folk songs—largely from poor, rural origins in the nation’s heartland—inspired a sociopolitical musical movement in its biggest metropolis.

Memorabilia on display reflect iconic moments from the time, like Bob Dylan’s original handwritten manuscript of “Blowin’ in the Wind;” Odetta’s green and gold dashiki and her guitar, “Baby”; and several recordings of “If I Had a Hammer.” 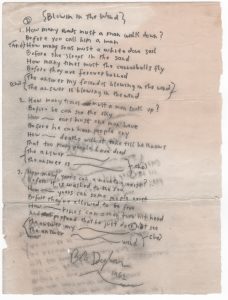 Original manuscript of Bob Dylan’s “Blowin’ in the Wind”

Included, too, are many objects from the ’30s and ’40s, like a flier from the seminal 1940 Grapes of Wrath benefit concert on 49th Street, where Woody Guthrie first met Pete Seeger, and the 12-string that belonged to Huddie “Lead Belly” Ledbetter, the influential folk-blues singer from Louisiana who introduced traditional standards like “Goodnight Irene” to the folk world. Kurt Cobain—a big Lead Belly fan—once tried to buy that guitar from the singer’s estate.

Among the many other instruments on display is folk singer Bob Gibson’s guitar, likely the same one he played at a 1961 Wisconsin concert, when a boy named John Heller—the father of three Fordham alumni and the exhibit’s co-chair—sat in the audience.

“I had never seen or heard anything like it. It changed my life,” Heller said in the preface of the book that accompanies the exhibit. In high school in Chicago, he played in a trio that included actor Bill Murray, with whom he is still good friends.

“As I was growing up, the big scene was in New York City. I would always read about Café Wha? and Folk City and the Bitter End.” Still feeling the pull decades later, Heller and his wife, Patti, moved to New York in 2003.

After attending a cabaret night at the museum with Fordham trustee fellow Jim Buckman, FCRH ’66, a museum board member, Heller said, “It kind of struck me that we should do a night like that but with folk music.” He prepared a detailed proposal and the idea grew from an evening to a full-fledged exhibit.

The show—and its related public events—have been popular, drawing visitors of all ages and prompting the museum to extend “Folk City’s” run to January 10, 2016. A summer panel event, Dylan Goes Electric, drew about 150 people, from the “Dylanologists” of the 1960s to a young woman with the curly-haired bard tattooed on the back of her calf.

Initially, Heller thought the exhibit would focus more on Dylan’s era and just before: from 1955 to 1965. “But as we got deeper into it, we started exploring the roots more deeply.”

And if Heller and the exhibit’s curator, Stephen Petrus, PhD, needed any added encouragement to reach back to the 1930s, they got it from none other than Pete Seeger. The singer performed at the opening fundraising concert for the exhibit in 2013, not long before he died in January 2014.

“He just walked in with maybe a guitar and a banjo,” said Heller, an advisory board member for Fordham’s WFUV, a media sponsor for the exhibition. “As he made his way down the aisle the room just became electrified.”

Petrus said that after the concert, despite the big reception going on inside the museum, “I was just out on Fifth Avenue talking to Pete.” The two spoke about half a dozen times. “He really encouraged me on the phone. He said, ‘You can’t just gloss over the ’30s and ’40s.’ I’ll never forget that.”

The exhibit pays tribute to the revival aspect of folk music—a resurgence of interests in the nation’s traditional song. New songs were being written, too, like “This Land Is Your Land,” which Woody Guthrie penned in a room at Hanover House on 43rd Street and Sixth Avenue in 1940. A large photo of the dustbowl troubadour in the exhibit shows him in a subway car, strumming a guitar with a sticker on it that says, “This machine kills fascists.”

The ’40s saw performers flocking to New York for recording opportunities as well as the chance to meet other singers and feel connected to the growing folk scene. African-American artists like singer and civil rights activist Josh White came to play in integrated clubs like Café Society.

Seeger began playing and making a name for himself, supporting new songwriters and introducing the sounds of the banjo to the New York club circuit. But his leftist politics ensnared him and many other artists in the Red Scare—to which the exhibit devotes an entire case. Seeger was blacklisted and refused to cooperate with the House Un-American Activities Committee.

In April 1961, the folkies protested against a ban on singing and playing music in Washington Square Park. Their fight was captured in Sunday, an award-winning documentary that became one of the first social-protest films of the 1960s.
In 1961, the folkies of New York would have a different fight on their hands. On Sundays, many of them would take their instruments down to Washington Square Park and play. “It would bring like-minded people together not just to play music but to check out the scene,” Petrus said. “People there were liberal, middle class, young earnest college students.” But thanks to a ban by the city’s parks department, who deemed them “freaks,” the park was suddenly off limits to them. After an initial protest turned violent, the folk community organized a second event—a “Right to Sing Rally.” Already large in number—they eventually garnered support from local businesses and politicians, and succeeded in having the ban lifted.

Louie Dean Valencia-García, GSAS ’10, an Andrew W. Mellon fellow at the museum, said the protests were effective largely because “the protesters were connected with people with power.” A doctoral candidate in Fordham’s history department, Valencia-García has written extensively about democratic and pluralistic space in contemporary history. “Often, such bans are less about the thing being banned, in this case music, and more about protecting the ways ‘things are supposed to be’—those in authority saw young people hanging out in the park, playing music, making a scene, as a threat.”

Indeed, much of the music of the era was meant to be a threat— to injustice, to racism, to violence and war. Songs like “We Shall Overcome,” an anthem of the civil rights movement; “Blowin’ in the Wind”; and “If I Had a Hammer” inspired protesters at rallies throughout the country, including the March on Washington in 1963.

Petrus said that while doing research for the exhibit, he was struck by how much people believed “that songs can have a transformative effect.” And the music, he said, offers a great appreciation for our cultural heritage.

“These songs provide us a window for who we are as Americans.”