skip to main content
Return to Fordham University
You are at:Home»Fordham Magazine»Features»Finding Community at Fordham: Puerto Rican Students Connect with Alumni at Intimate Reception
Photos by Chris Taggart
A group of Fordham students from Puerto Rico gathered at the Lincoln Center campus on Wednesday evening, October 12, for an exclusive reception hosted by the Office of Undergraduate Admission. The event coincided with a week of festivities celebrating the inauguration of President Tania Tetlow, who stopped by to welcome the students.

“I’m particularly happy to be here with you, for those of you who are first-year students, so that we can go through this together—this moving to this cold place with strange food,” joked Tetlow, a longtime New Orleans resident who officially joined the Fordham community on July 1.

The students got an opportunity to mingle not only with each other and the new president but also with Armando Nuñez Jr., GABELLI ’82, chair-elect of Fordham’s Board of Trustees, and some prominent alumni from their native island, including Fordham trustee Gualberto J. Rodríguez-Feliciano, FCRH ’95, and Mario Porrata-Nieva, FCRH ’91.

John Buckley, GSE ’89, vice president for enrollment, said that in recent years, the number of first-year students from Puerto Rico has been steadily increasing. This fall, Fordham welcomed a “record-breaking” 17 students from the island. He credited the alumni for helping to spread the word about the value of a Fordham education and the difference it has made in their lives.

Finding a ‘Community of People Who Understand’ You

Cristina Flores, a Fordham junior from Dorado, a town on the northern coast of Puerto Rico, said she initially enrolled at a college in Philadelphia with her twin sister. After a year and a half, however, she didn’t feel at home there, so she transferred to Fordham’s Gabelli School of Business as a sophomore last spring.

“When I came here, I feel like I was able to find those people who do their thing, and I do mine, but at the same time have that community of people who understand me as a person,” said Flores, who is majoring in global business, with a concentration in global marketing with consumer insights.

She added that, while she misses “her other half,” she is glad she decided to transfer. And she isn’t without family in New York: On Sundays, she goes to church with her older sister, who also lives in the city. On campus, she’s involved with the FCLC Yoga and Mindfulness Club and is hoping to start a new club for students like her.

“We’re still trying to find people who want to join, but we want to be able to have that community for people who transfer from other colleges or are international students like myself,” she said. 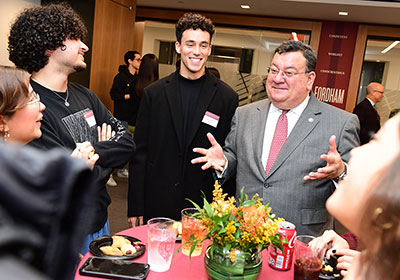 Mario Porrata-Nieva, FCRH ’91, president and CEO of Universal Apps Inc., urged students to take advantage of their exclusive access to President Tetlow and other alumni during the event, adding that events like this one are important for any students likely to experience some culture shock.

Javier Méndez Lacomba, a first-year student from San Juan studying business administration with a double concentration in business economics and global business, said he was attracted by the University’s strong extracurriculars, including El Grito de Lares.

Founded more than 50 years ago, the student club successfully advocated for changes to the Fordham curriculum to reflect the growing diversity of students on campus in the late 1960s. The University launched a Puerto Rican studies program in fall 1970, one year after launching what would become the Department of African and African American Studies. In the mid-1990s, the Puerto Rican studies program expanded and changed its name to the Latin American and Latino Studies Institute. Today, El Grito de Lares offers Hispanic students a safe place to discuss their heritage and shared experiences.

Even with that, Lacomba said the transition to college life is not without its challenges, such as trying to connect with people who “perhaps don’t share the same interests or are from different social and political backgrounds.” While it doesn’t always go as fluidly as he would like, he said Fordham’s faculty and administration offer “the best resources” to help him and others connect with their fellow students.

The idea of taking advantage of Fordham’s resources for academic and social support was one echoed by Rodríguez-Feliciano, an entrepreneur and co-founder of Nutriendo PR. During an emotional speech, the Fordham trustee recalled his days as an undergraduate in the 1990s and encouraged students prioritize their mental health and ask for help if they need it. 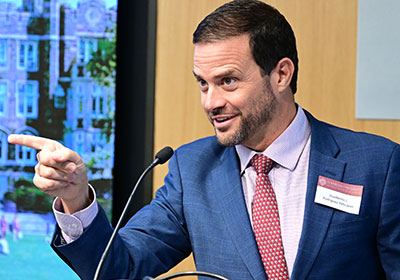 “I remember how strange it was: the temperature, the smells, the faces, the sounds, the sunsets, the mornings, the food, the music, the culture—so different,” he said, recalling what it felt like to move from Puerto Rico to New York City. “This institution cares about you specifically: you, your name. Let the system know, let people know that you’re having a hard time, and you’re going to get a beautiful response.

“I had that experience in sophomore year, when I was against the wall, and my theology professor was there for me,” said Rodríguez-Feliciano, who earned a bachelor’s degree in economics and political science from Fordham in 1995 and received a prestigious Harry S. Truman Scholarship, which he used to get an M.B.A. from Yale University. “I didn’t know I was being supported the whole time [at Fordham], but if I don’t open up, they can’t respond.”

During the event, Tetlow also spoke about the sense of resilience and community that she feels she shares with people from Puerto Rico, touching on the devastation Hurricane Fiona wrought in September.

“I lived through [Hurricane]  Katrina where my friends died, where I had to rescue my family with a friend on a boat, where [I had]  that sense of wondering if anyone cares … and months that turned into years of anguish and rebuilding and slogging effort only to face it again,” she said. “I say that not to remind you of that pain but to [let you]  know … that this experience that I wouldn’t wish on my worst enemy is also a fundamental part of who I am.”

“I see that strength in you,” she added. “So, I hope that I’ll see you on campus, that we’ll give each other that look that we know each other, and that we will learn this city together.”