skip to main content
Return to Fordham University
You are at:Home»Fordham Magazine»Finding a Path to the Foreign Service
Erik Angamarca at the Jefferson Memorial in Washington, D.C. (Photo by Paul Fetters)

Erik Angamarca needed a backup plan. He had studied in Beijing during his junior year at Fordham and loved it—the food, the culture, the people. Passionate about travel and public service, multilingual, and long set on joining the U.S. diplomatic corps, he applied to the State Department’s Thomas R. Pickering Foreign Affairs Fellowship Program in pursuit of his dream.

The program turned him down.

“I was sort of bummed,” Angamarca says. “My ‘Plan A’ was to apply for the Foreign Service.”

He went on to graduate from Fordham in 2014 with a degree in international political economy and a minor in Mandarin Chinese. Looking back, he realizes he wasn’t quite ready—but he also wasn’t prepared to give up.

So, the summer after graduation, he applied on a whim to teach English in South Korea through the Council on International Educational Exchange. “I didn’t know one word of Korean, but I’d just been to China and China was great,” he says. “I thought, ‘Let me get that experience overseas and learn more about Asia.’”

And learn he did. During his two-year teaching stint, Angamarca spent four months exploring East Asia—backpacking through the Philippines, Hong Kong, Vietnam, Thailand, Laos, Cambodia, and Indonesia. He lodged in temples and volunteered at an elephant sanctuary.

The experience paid off. Late last year, Angamarca earned a Charles B. Rangel International Affairs Graduate Fellowship, which will support his training for the Foreign Service. He recently began graduate studies at Georgetown University.

An Early Interest in Diplomacy

Angamarca wants to become an ambassador, and even though he’s years away from that goal, he has already gotten a few tastes of what it’s like to represent America abroad. He got the travel bug at age 10, after leaving New York to spend two years in his parents’ native Ecuador, where he realized that he liked trying new things (roasted guinea pig, anyone?) and first envisioned himself as a diplomat.

“Even at that age, you get a lot of questions,” recalls Angamarca, whose flawless manners and quiet self-assurance seem like a natural fit for a career in diplomacy. “‘How is New York?’ ‘What does snow feel like?’ Teaching them about Thanksgiving. I didn’t know until years later that I was representing the U.S.”

Another experience followed his adventures in South Korea and East Asia. After returning to the U.S. in 2016, he reconnected with Fordham’s Office of Prestigious Fellowships, which helped him earn a Fulbright English Teaching Assistantship to Taiwan. He spent the 2017–2018 academic year there, not only teaching English to grammar school students but also introducing them to American traditions like Halloween costumes and candy canes. 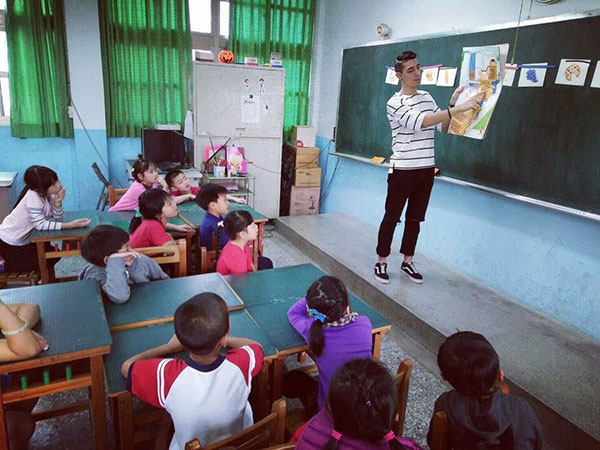 As he pursues his studies at Georgetown on the Rangel fellowship, supporters have cheered him on, including his parents, his younger sister, and Patricia Scroggs, a retired Foreign Service officer who directs the Charles B. Rangel International Affairs Program. She’s known Angamarca since he participated in the organization’s undergraduate scholars program.

“From the time I met Erik, I thought, he is such a natural diplomat, is interested in so many things, and interacts so well with people,” says Scroggs, also noting his adaptability and resourcefulness. “He has done the kinds of things he’ll be called upon to do as a Foreign Service officer.”

When Angamarca applied for this year’s Rangel fellowship, which provides full financial support for the two years of diplomatic studies, he was one of 30 people chosen from among 550 applicants.

“I’m already planning to be there at his ambassadorial swearing-in ceremony,” says Scroggs, seeing into the future, to the culmination of Angamarca’s dreams.

He’s on track to graduate in 2020 and must stay in the diplomatic corps until at least 2025.

“I’ve always told the director it’s not a five-year commitment for me,” Angamarca says. “I definitely want to stay in the Foreign Service for a while. It’s needed now more than ever.”