skip to main content
Return to Fordham University
You are at:Home»Fordham Magazine»Features»Fiction: “The Future That Takes Shape Too Soon” by Don DeLillo

From the novel The Silence

Counting down by sevens in the future that takes shape too soon.

There were six candles placed around the living room and Diane had just put a match to the last of them.

She said, “Is this a situation where we have to think about what we’re going to say before we say it?”

“The semi-darkness. It’s somewhere in the mass mind,” Martin said. “The pause, the sense of having experienced this before. Some kind of natural breakdown or foreign intrusion. A cautionary sense that we inherit from our grandparents or great-grandparents or back beyond. People in the grip of serious threat.”

“I’m grinding out theories and speculations.”

The young man was standing at the window and Diane wondered if he planned to head home to the Bronx. She imagined that he might have to walk all the way, up through East Harlem to one of the bridges. Were pedestrians allowed to cross or were the bridges for cars and buses only? Was anything operating normally out there?

The thought softened her, made her think that she might offer to accommodate him for the night. The sofa, a blanket, not so complicated. Stove dead, refrigerator dead. Heat beginning to fade into the walls. Max Stenner was in his chair, eyes on the blank screen. It seemed to be his turn to speak. She sensed it, nodded and waited.

He said, “Let’s eat now. Or the food will go hard or soft or warm or cold or whatever.” They thought about this. But nobody moved in the direction of the kitchen.

Then Martin said, “Football.” A reminder of how the long afternoon had started. He made a gesture, strange for such an individual, the action in slow motion of a player throwing a football, body poised, left arm thrust forward, providing balance, right arm set back, hand gripping football.

Here was Martin Dekker and there was Diane Lucas standing across the room, puzzled by the apparition.

He seemed lost in the pose but returned eventually to a natural stance. Max was back to his blank screen. The pauses were turning into silences and beginning to feel like the wrong kind of normal. Diane waited for her husband to pour more whiskey but he showed no interest, at least for now. Everything that was simple and declarative, where did it go?

Martin said, “Are we living in a makeshift reality? Have I already said this? A future that isn’t supposed to take form just yet?”

“A power station failed. That’s all,” she said. “Consider the situation in those terms. A facility along the Hudson River.”

“Artificial intelligence that betrays who we are and how we live and think.”

“Lights back on, heat back on, our collective mind back where it was, more or less, in a day or two.”

“The artificial future. The neural interface.”

They seemed determined not to look at each other.

Martin, speaking to no one in particular, raised the subject of his students. Global origins, assorted accents, all smart, specially selected for his course, ready for anything he might say, whatever assignment, whatever proposal he might advance concerning areas of study beyond physics. He’d recited names to them. Thaumatology, ontology, eschatology, epistemology. He could not stop himself. Metaphysics, phenomenology, transcendentalism. He paused and thought and kept going. Teleology, etiology, ontogeny, phylogeny.

They looked, they listened, they sniffed the stale air. This is why they were there, all of them, students and teacher.

“And one of the students recited a dream he’d had. It was a dream of words, not images. Two words. He woke up with those words and just stared into space. Umbrella’d ambuscade. Umbrella with an apostrophe d. And ambuscade. He had to look up the latter word.

How could he dream of a word he’d never encountered? Ambuscade. Ambush. But it was umbrella with an apostrophe d that seemed a true mystery. And the two words joined. Umbrella’d ambuscade.”

He waited for a time. “All this in the Bronx,” he said finally, making Diane smile. “There I stood listening to the young men and women discuss the matter, the students, my students, and I wondered, myself, what to make of the term. Ten men with umbrellas? Preparing an attack? And the student whose dream it was, he was looking at me as if I were responsible for what happened in his sleep. All my fault. Apostrophe d.”

There was a knock on the door. It sounded weary, elevators not working, people having to climb eight flights. Diane was standing right there but paused before reaching for the doorknob.

They took off their coats and tossed them on the sofa and Diane gestured to Martin and spoke his name and there were handshakes and half embraces and Max standing with one clenched fist raised in a gesture of greeting. He saw the bandage on Jim’s forehead and threw a few counterfeit punches.

When everyone was seated, here, there, the newcomers spoke of the flight and the events that followed and the spectacle of the midtown streets, the grid system, all emptied out.

“And you’re back from Rome.”

“We’re back from Paris,” Tessa said.

The couple lived on the Upper West Side, which would have meant a walk through Central Park in total darkness and then a longer walk uptown.

The conversation became labored after a while, shadowed in disquiet. Jim spoke looking down between his feet and Diane waved her arms indicating events taking place somewhere beyond their shallow grasp.

“Food. Time to eat something,” she said. “But first I’m curious about the food they served on your flight. I know I’m babbling. But I ask people this question and they never remember. Ask about the last restaurant meal even if it was a week ago and they can tell me. No problem. Name of restaurant, name of main course, type of wine, country of origin. But food on planes. First class, business class, economy, none of it matters. People do not remember what they ate.”

No one spoke for a moment.

Then Diane said, “Our food. Here and now. Football food.”

Martin went with her to the kitchen. The others waited quietly in candlelight. Soon Tessa started counting down slowly by sevens from two hundred and three to zero, deadpan, changing languages along the way, and eventually the food arrived, prepared earlier by Max, and all five individuals sat and ate. The kitchen chair, the rocking chair, the armchair, a side chair, a folding chair. None of the guests offered to go home after the meal even when Jim and Tessa got their coats off the sofa and put them back on, simply needing to get warmer. Martin closed his eyes as he chewed his food.

Was each a mystery to the others, however close their involvement, each individual so naturally encased that he or she escaped a final determination, a fixed appraisal by the others in the room?

Max looked at the screen as he ate and when he was finished eating he put the plate down and kept on looking. He took the bottle of bourbon off the floor and the glass with it and poured himself a drink. He put the bottle down and held the glass in both hands.

Then he stared into the blank screen.

From The Silence: A Novel by Don DeLillo. Copyright © 2020 by Don DeLillo. Reprinted by permission of Scribner, a Division of Simon & Schuster, Inc., and the Robin Straus Agency, Inc. 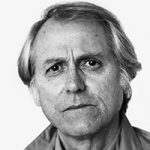 Don DeLillo, FCRH ’58, is the author of 17 novels, including Libra, Underworld, Falling Man, Zero K, and White Noise, which earned the National Book Award in 1985. He has won the Jerusalem Prize for his complete body of work and the William Dean Howells Medal from the American Academy of Arts and Letters. In 2013, he earned the Library of Congress Prize for American Fiction, and in 2015, the National Book Foundation awarded him its Medal for Distinguished Contribution to American Letters.