skip to main content
Return to Fordham University
You are at:Home»Fordham Magazine»Features»Father O’Hare as the Fordham Pastor

As Fordham’s 31st president, the Rev. Joseph A. O’Hare, S.J., has left a legacy that can be measured in square footage and financial growth, but what is less tangible—though certainly no less felt—is his enduring impact on countless members of the Fordham family as their spiritual leader.

“We’ll remember [Father O’Hare] when tragedy struck as the pastor who, through his presence, words and voice, transformed suffering into an occasion for learning and grace,” said the Rev. Raymond Schroth, S.J., author of Fordham: A History and Memoir.

When the Fordham community gathered to mourn the loss of three students and 36 alumni who were killed in the terrorist attacks of Sept. 11, 2001, with a Mass of Remembrance and Hope, Father O’Hare said: “We can be transformed by better realizing how fragile is the gift of life and learn to treasure it all the more. … We can respect the promise of life, in ourselves and in others more deeply, and recognize, more keenly than before, that if life is not shared, it will be squandered.”

Father O’Hare has shared his pastoral gifts in the wake of events that have forever changed the world and during moments that have deeply affected the Fordham family. Meaningfully and memorably, he spoke at an impromptu memorial Mass when 20-year-old defensive back Bill Tierney died suddenly on Coffey Field just before the Homecoming game in October 1996. To mark the loss, Sesquicentennial Hall was renamed Tierney Hall in 1998.

He has been called upon again and again to comfort and console the Fordham family in difficult times, but also to celebrate and christen its happiest moments. “His presence made the milestones even more meaningful,” said John Buckley (GSE ’89), assistant vice president for undergraduate enrollment, reflecting on the fact that his two children were baptized by Father O’Hare.

When The World of Hibernia magazine featured Father O’Hare in a 1998 article about the “shining stars of the Irish diaspora,” he summed up the boon of his heritage: “I welcome the Irish sense of both the tragedy and comedy of life—and the Irish gift of language to deal with both.”

While president, he officiated at more than 50 alumni weddings. One particularly memorable wedding took place on Oct. 26, 1996, the same day the New York Yankees beat the Atlanta Braves to win the World Series. After celebrating the nuptial Mass for Bob Hagan (FCO ’88, GBA ’90) and his wife, Kerri, Father O’Hare joined the families for the reception at the Canyon Club in Armonk, N.Y. Midway through the festivities, however, Hagan’s parents noticed that Father O’Hare was leaving in a hurry. They alerted their son, who recently recalled what happened next.

“I literally ran to the parking lot to track him down. I said, ‘Father, is everything all right?’ ‘Robert, I am fine,’ he said. ‘The Yankees can clinch the Series tonight, and I have tickets to the game. I really have to go.’

“We still laugh about that,” said Hagan. “I love that guy.” 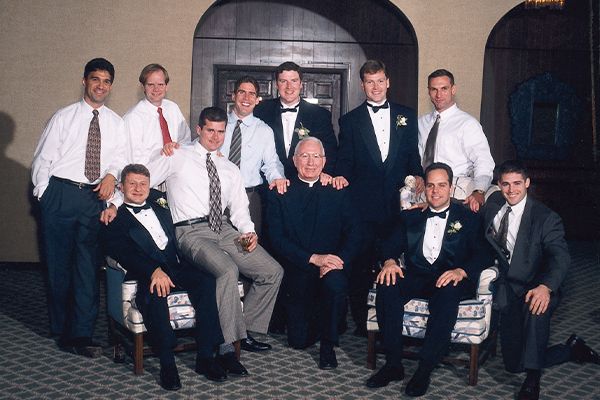