skip to main content
Return to Fordham University
You are at:Home»Fordham Magazine»Alumni News»‘Faith on Tap’ Talk Highlights the Power of Spiritual Resistance, from the 1940s to Today
Photos by B.A. Van Sise
Some of Brenna Moore’s best friends are no longer around. In fact, she’s never met them. They were part of the 1940s French Resistance.

On a rainy Wednesday night this month, Moore, an associate professor of theology at Fordham, spoke about her friends to a few dozen recent Fordham graduates who filled the brick-walled backroom of a Midtown Manhattan pub for the Young Alumni Committee’s annual Faith on Tap event.

Moore called her lecture “Spiritual Resistance: Lessons from the 1940s,” and she used her years of research and writing on Catholic French Resistance figures to inspire attendees feeling appalled by the politics of today and hoping to be a force for good in the world.

While philosophers Jacques Maritain and Simone Weil and Jesuit priest Henri de Lubac aren’t widely read and discussed outside theology and philosophy classrooms these days, Moore said the three have a lot to offer modern Americans. “They sort of saw these storm clouds gathering [in Europe] with the ascendency of anti-Semitism, xenophobia in the 1930s, and were clearly able to name everything that was happening,” she said.

In today’s political moment, with its increase in public demonstrations of racism, xenophobia, and nationalism, Moore said that her research subjects became more real.

“They were like these dreamlike people, occupying my imagination, warning me of a sort of dreamlike, nightmare future,” she said. Now, they “seem much more kind of human and down to earth. … They really are men and women that can simply offer their direct instruction for us today.”

The ‘Nourishing Food of Greater Unity’

Even in years of great violence and political division, thinkers like de Lubac, Weil, and Maritain practiced a nonviolent “spiritual” resistance, Moore said. They organized, they protested, and they wrote—very carefully.

“They were extremely vigilant about language. They were always on the lookout for how easily language could be distorted in ways that would misinform, seduce, and weaken people’s ability to think critically and clearly,” Moore said. “They knew that language changes not only what we say and write, but how we feel, or how we interpret reality.”

Moore referenced Marie-Madeleine Davy, a French Catholic philosopher who would always classify other, marginalized groups as part of the same human race—“Some of us are Jews. … Some of us are Muslims,” she’d note, Moore said.

Henri de Lubac, who became a cardinal of the Catholic Church in 1983, called this use of the first-person plural “a way to distribute spiritual food.” Or, in Moore’s words, “the nourishing food of greater unity,” as opposed to “the junk food of language that divides us.”

But the French Resistance figures Moore discussed weren’t solely focused on other faiths. They felt a connection to Catholics around the world, despite racial or national boundaries. After all, “catholic means universal,” Moore said, and she told Fordham alumni they can apply that lesson, especially if they’re interested in volunteering or joining an advocacy group. 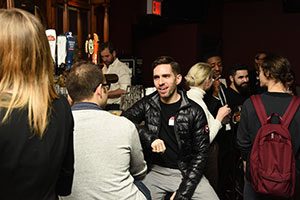 “I feel like sometimes it can be embarrassing—what are you going to do, just call a nonprofit and ask to volunteer?” Moore said. But she said that going to a Jesuit school and taking theology classes—even for those who aren’t Catholic or even religious—can provide a common ground and a common language for getting involved with a faith-based organization. “It gives you a little foot in the door,” she said.

‘No One Acts Alone’

Moore also noticed that her subjects wrote about friendship as much as they did spirituality.

“It was a more interpersonal, warmer way of engaging the political world,” she said. “We tend to think of the [French] Resistance or any of the heroes in history as kind of courageously facing the immensity of anti-Semitism or racism, facing the immensity alone. But that’s not true. They did all this work in the context of intimate friendships, even families. … No one acts alone.”

Moore closed the lecture by giving attendees a high grade.

“The other thing that [the French Resistance figures] did was have a civil society,” Moore said. “Even just coming out on a rainy night to talk about ideas—this is really important stuff.”