skip to main content
Return to Fordham University
You are at:Home»Fordham Magazine»Features»Faith and Service

John McCloskey was serving as archbishop of New York in 1875 when he became the first American to be made a cardinal in the Catholic Church. Thirty-four years earlier, he had served as Fordham’s first president, from 1841 to 1842.

165. The Journeys of St. Isaac Jogues Are Depicted in Duane Library 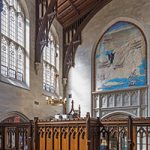 On the western wall of Tognino Hall in Duane Library hangs a historical mural showing the North American journeys of 17th-century martyred missionary Isaac Jogues, S.J., who is thought to be the first Catholic priest to pass through the New York City area. He was born in France in 1607, became a Jesuit in 1624, and traveled among the Iroquois, Huron, and others before he was killed at the Mohawk village of Ossernenon.

The artist, Hildreth Meière (1892 to 1961), was a native New Yorker and an accomplished Art Deco muralist and painter. She created the mural in 1949, seven years after she painted the triptych representing Our Lady Mediatrix of All Graces that hangs on the reredos behind the altar in the University Church. 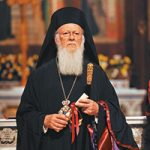 167. Father Fitz Was Puerto Rican Man of the Year 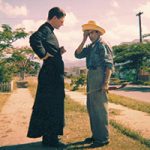 Joseph P. Fitzpatrick, S.J., a sociology professor at Fordham from 1949 to 1983, was a humanist scholar whose writings on the Puerto Rican migration to New York City brought him international renown. He was also a forceful advocate for the Puerto Rican community, which in 1978 named him Puerto Rican Man of the Year—likely making him the only Irish American to receive that honor.

Washington Monthly recently ranked Fordham No. 28 in service. More than 4,000 students provided more than 1.1 million hours of community service last year, working with groups in New York City and beyond to create a more just and humane world.

169. Father Novak Was a Pioneer in Religious Education

In the late 1950s, a young Jesuit named Vincent M. Novak, S.J., expressed some dissatisfaction to his superiors with the rote manner in which religion was being taught in the Jesuit-run high schools of New York. Encouraged to do better, he wrote and edited a new textbook series, and in 1964 welcomed to Fordham an inaugural class of 24 students pursuing a master’s degree in religious education.

By 1975, the program blossomed into the Graduate School of Religion and Religious Education, which Father Novak led until 2004. Students have come to the school from more than 60 countries, and Fordham-trained educators, pastors, and caregivers have brought their expertise to people throughout the world.

170. Sister Johnson Is an Architect of Feminist Theology 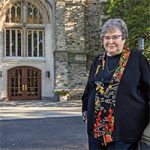 Sister Elizabeth Johnson, C.S.J., is one of the most influential Catholic theologians in the world—a bold and progressive thinker for our times. A Fordham faculty member since 1991, she is the author of 10 books and numerous other writings that have integrated feminism and environmentalism into Catholic theology and offered groundbreaking perspectives on traditional Catholic thought. 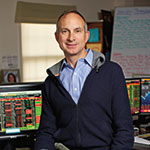 Thanks to the generous support of James Leitner, LAW ’82, Fordham created the Leitner Center for International Law and Justice in September 2007. Through the center, students participate in human rights fact-finding missions throughout the world. The center also features a Sustainable Development Legal Initiative, a human rights clinic, and an ongoing series of lectures and colloquiums—all designed to facilitate collaboration among law students, scholars, and human rights activists in the U.S. and abroad.

The University’s Global Outreach program, established in 1990, gives students a chance to study issues of poverty and justice as they participate in service-learning and cultural-immersion experiences throughout the world. Since its founding, the program has expanded to approximately 30 locations throughout the U.S. and in countries in Asia, Africa, Latin America, and Europe.

Since 2001, Fordham’s Institute of International Humanitarian Affairs (IIHA) has trained thousands of aid workers from more than 140 nations, providing them with the knowledge and skills needed to respond effectively in times of humanitarian crisis and disaster. Courses are offered on the undergraduate and graduate level, on a global scale, and for mid-career aid workers as well as those interested in entering the field.

174. We Are a Strategic and Agile University

In fall 2015, Joseph M. McShane, S.J., president of Fordham, established a Continuous University Strategic Planning committee made up of faculty and administrators. They developed A Strategic Framework for Fordham’s Future: Bothered Excellence, and the Board of Trustees approved the plan in September 2016.

175. A Fordham Education Is Transformative

Since 2003, when he became president of Fordham, Joseph M. McShane, S.J., has spoken often about what it means to be educated at the Jesuit University of New York. His words capture the spirit of Fordham’s past and present—and its promise for the next 175 years and more:

“When you put it all together, what is a Fordham education all about? Nothing less than empowerment and transformation. Cared for, our students are challenged. Challenged, they awaken to their real potential. Awakened, they are transformed. Transformed, they are empowered. Empowered, they emerge from their experience at Fordham as recognizable Jesuit graduates: They are men and women of competence, conscience, compassion, and commitment to the cause of the human family. They are men and women who make a difference in the world.” 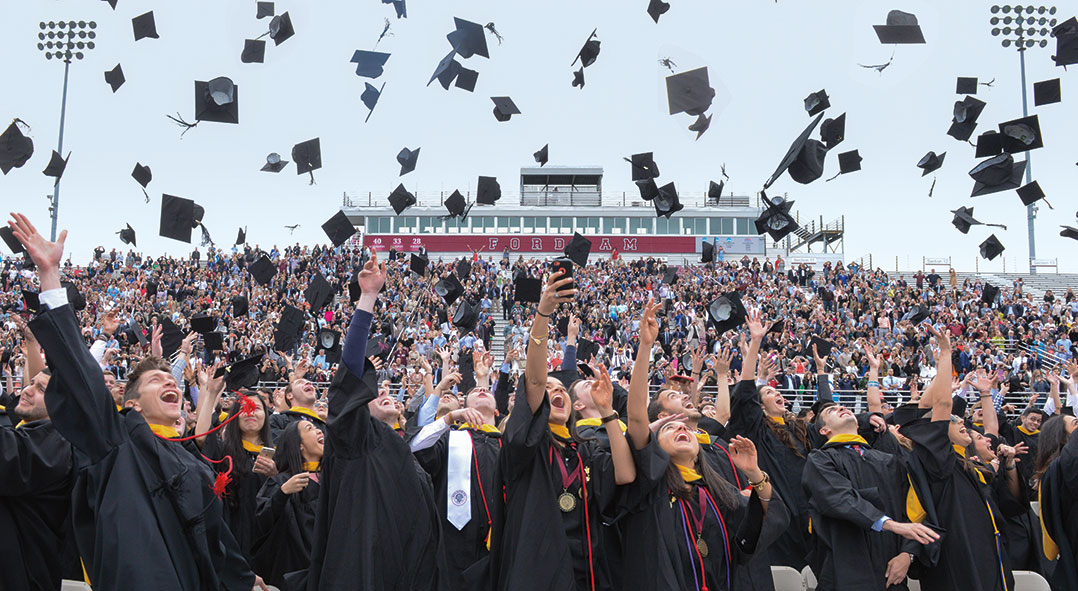 Fordham has been part of countless stories since 1841. Tell us yours at [email protected]