skip to main content
Return to Fordham University
You are at:Home»Editor's Picks»Ever Rising: An Artist’s Take on the Ways We Remember—and Forget—the Troubled History of Race Relations in America
Above: This 2014 collage by Casey Ruble, The wind was out of the west at 20 m.p.h., shows an Asbury Park intersection that was a site of social unrest and violence in July 1970. All images courtesy of the artist and Foley Gallery
In a series of paper collages titled Everything That Rises, Fordham artist-in-residence Casey Ruble depicts two types of historic sites: places where race riots happened nearly five decades ago and former way stations on the Underground Railroad—all as they appear today in her home state of New Jersey.

Although the collages are striking, the sites themselves seem unremarkable: A hair salon, a burger joint, street corners, churches, and other locales bear little to no trace of their fraught past. Some of the titles, however, underscore Ruble’s concern with the “ways we remember—and forget—the charged events of our country’s turbulent history of race relations,” she writes. A Jersey City sidewalk scene, for instance, is called Everyone here is aware of what has happened but they also want to forget as quickly as possible.

Ruble, who has taught in Fordham’s visual arts department since 2001, created the collages over the past few years. She first showed them last fall at the Visual Arts Center of New Jersey and again this past winter at the Foley Gallery on Manhattan’s Lower East Side. She spoke with FORDHAM magazine via email in April. 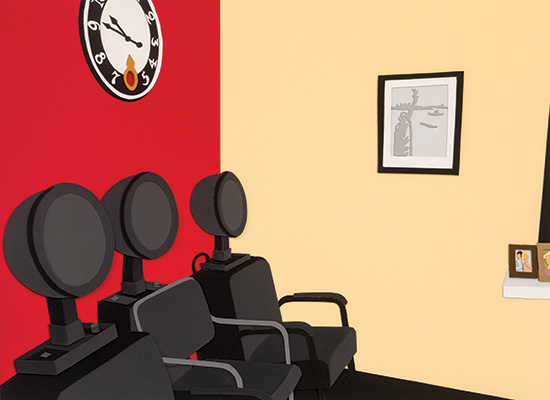 As you researched these sites, did you learn anything that surprised you or ran counter to your sense of New Jersey’s place in U.S. history?

Oh my gosh, yes! I’d always known that the North’s relationship to slavery was a complicated one, but one thing that really surprised me was that New Jersey was known as the “slave state of the North.” In 1846, it enacted an abolition law that freed all black children born after its passage but designated the state’s remaining slaves as “apprentices for life.” Eighteen of these “apprentices” still remained in 1860, making New Jersey the last Northern state to enslave people. I was also surprised by just how few white Northerners supported the Underground Railroad. 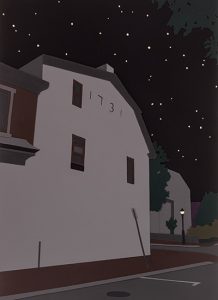 Did you have a hard time finding and getting access to safe-house locations?

It’s ironic—in its day, the Underground Railroad was a highly unpopular movement among Northern whites, and also highly illegal, of course. Participants had to operate in secrecy. Today, on the other hand, it’s held up as evidence of our country’s inherent morality, and everyone with a trap door or passageway in the basement likes to speculate that their home was part of the effort to help fugitives escape. I didn’t have a hard time finding or getting access to the safe-house locations—what was harder was actually confirming that they were genuine.

Which riot locations did you depict in the series?

The state had five major race riots—in Jersey City, Paterson, Newark, Plainfield, and Asbury Park. They all happened in the 1960s, except for Asbury Park, which took place on Independence Day, 1970. When I first began this series, I’d planned to depict the place where the riots “started.” But that quickly grew complicated as I got further into my research. Was the “start” of the riot the street corner where the first brick or Molotov cocktail was thrown? Or was it where the precipitating event occurred—for instance, where the Newark police arrested and brutally beat a black cab driver who’d done nothing more than pass a double-parked squad car? Identifying where something supposedly began is freighted with judgments about guilt and responsibility. Looking at the longer arc of history, you can easily make the case that all of the riots actually began with the original violence of slavery—there’s a direct line from slavery to Jim Crow to the uprisings of the civil rights era, which were a response to centuries of horrific brutality. 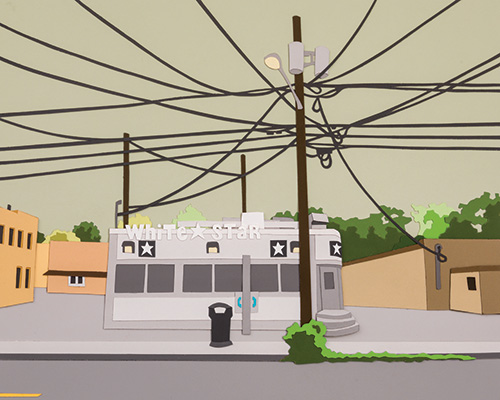 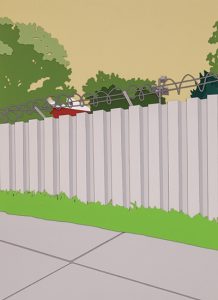 Everyone here is aware of what has happened but they also want to forget as quickly as possible. 2014

Tell me about Everyone here is aware of what has happened but they also want to forget as quickly as possible. Why did you choose that title for the piece?

All of the pieces that depict riot sites are titled with sentences taken from contemporaneous newspaper reports of the incidents. That particular sentence struck me not only as having an obvious connection to the feelings of the time but also as symbolizing how many have come to view the uprisings of the 1960s, 50 years later—as shameful events better left out of the history books because they threaten the dominant narrative of our country as a land of opportunity and freedom.

Why are the safe-house locations called Untitled with the name of the town in parentheses?

I left the Underground Railroad sites untitled to allude to the secrecy that shrouded them in their day. I thought a lot about the idea of silence while making this series, and how silence has many different connotations. In the context of the Underground Railroad, silence was used as a tool of protection. But there’s also silence—or more accurately, silencing—that occurs in the context of oppression. Martin Luther King referred to the riots of the civil rights era as “the language of the unheard.” And finally there’s the silence of the landscape itself, which swallows the secrets of its past with every big-box store and parking lot that’s laid down on historically significant ground. 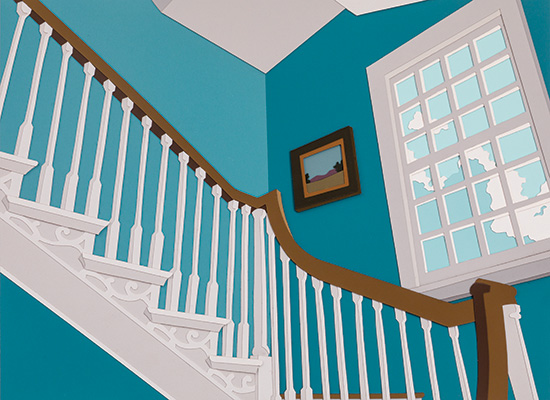 You took the title of your series from the 1965 Flannery O’Connor short story “Everything That Rises Must Converge.” Why did you use those words to unite the collages you created?

These places, both the Underground Railroad sites and the race riot sites, were about rising—rising up, rising against—and about convergence, in both cooperation and conflict. [O’Connor’s story is] about an altercation between a white woman and black woman riding a bus in the South shortly after the desegregation of the transportation system. The fact that the story is about race relations—and about the complicated relationship between forward and backward movement—just underscored the fact that it was the right title for my series. 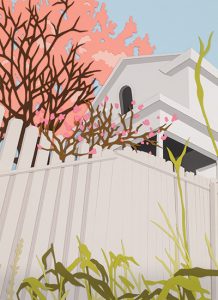 The title isn’t original to O’Connor. She took it from the Jesuit scientist and philosopher Teilhard de Chardin, who wrote about spiritual evolution. Do you feel you’ve transformed the title in some way with your work?

I haven’t studied Teilhard in as much depth as I’d like to, but my understanding is that he believed that creation was not a singular event but rather an ongoing development—that evolution was a spiritual and moral progression toward a point associated with Christ. I think O’Connor recognized that we are only partway through that progression toward convergence with Christ, and I think her story is about the messiness of that trajectory. My adopting of her title 50 years later is not so much a transformation of its meaning as it is an accounting of our progress. How much closer are we to Teilhard’s convergence? Perhaps not as close as we should be. But I don’t see this strictly as a condemning fact. I see it as a call to rise to everything we as a nation have claimed to believe in. As a call to keep struggling toward grace.

You’ve written that the collages depict a “present that’s unmoored from its past but never perfectly free from it.” Is that a good thing? Should we be free from the past? Or have you tried to bring about a kind of artistic convergence of past and present?

I’m tempted to say, yes, that’s exactly what I’m trying to do. But actually I think the collages do just the opposite—they talk about our disconnect from the past. Or maybe they do both. In the course of making this series, I’ve thought a lot about remembering and forgetting, and when each is “better.” Let’s for a second assume that the entire nation could completely forget our history. That we all woke up tomorrow with amnesia. We would presumably recognize difference in skin tone, but what would we make of it? It would be an interesting experiment—maybe we’d all get along better, maybe not.

As a white woman, I’ve also thought a lot about the implications of looking so closely at white-initiated violence against black communities and individuals. Does this focus just ossify modes of oppression and perception that still exist? Does it suppress stories about black achievement and triumph? Or is it a critically needed acknowledgment of the white community’s wrongdoing? An attempt to take responsibility for the past and move forward, in whatever way that may mean? 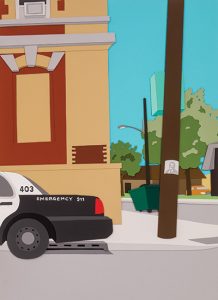 Music. Even laughter. And always the gunfire. 2015

Has the Black Lives Matter movement influenced your work or your thinking about this project?

I started this series a year before the events in Ferguson, well before the Black Lives Matter movement. Although I came to the series through my earlier interest in conflict in general, the project obviously immediately became one about past and contemporary race relations. It was a subject that wasn’t dominating the national conversation in the same way it is now, and the series was my own small attempt to open up that conversation. The Black Lives Matter movement has moved the conversation forward in much more effective, widespread ways, of course. Last year I participated in a march in New York City for Eric Garner. Along with about a hundred other people, I laid down in a street near Penn Station. After two years of visiting past riot sites on my own, in a very solitary way, it was an incredibly moving experience to be among hundreds with a collective voice strong enough to bring the city to a screeching halt. It felt like stopping the heart of the city and pushing the blood in a new direction, toward extremities that hadn’t been receiving enough of it. 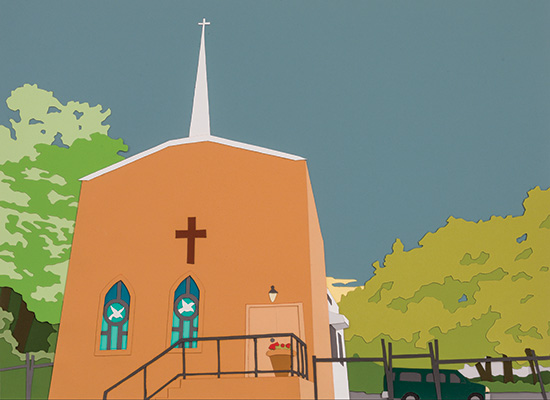 The governor answered “no” when asked about any Communist instigation of the riots. 2014

New York Times art critic Ken Johnson described your collages as being “deadpan cool” but conceptually “loaded” and “painfully hot.” Is that hot and cool combo something you wanted to convey?

Definitely. Conceptually, this is a very loaded topic to address. And I’m an artist, not a scholar, on these subjects—it’s not my place to offer any kind of “authoritative” statement. The only way I personally feel comfortable addressing race relations is by looking in a very objective, “deadpan cool” way at how these sites of historical significance have changed over the years. What gets lost? What gets remembered? To what end? The answers to these questions help give us a sense of where we are today and what we need to work toward.

What would you like viewers to take away from the project?

I’d love for viewers to come away from it looking more closely at everything that surrounds them—being curious about hidden narratives. Areas that are economically depressed are rendered anonymous—or worse, as “dangerous” or “blighted.” Disconnecting communities from their history in this way is a powerful means of perpetuating their oppression. Regardless of where you live, that place has a history. Maybe a Walmart sits on it. Maybe it’s just an empty lot. The present often obliterates the past. But knowing the past may give you a sense of agency you might not have had otherwise.