skip to main content
Return to Fordham University
You are at:Home»Fordham Magazine»Emmett’s: Chicago Pizza Stakes a Claim in SoHo
Above: Emmett Burke at his MacDougal Street restaurant in Manhattan. Photo by B.A. Van Sise
Before he opened his restaurant in SoHo, before he even looked for a space, Emmett Burke, GABELLI ’05, tested a lot of pizza recipes.

“I made pizza for months on end, to the point where my friends said I was totally crazy. I would have dozens of different types of tomatoes and dough samples and try recipes that affected the flavor profile,” he said.

The pressure was on, because Burke wasn’t planning on opening just any pizza place. He was going to serve deep-dish pizza. From Chicago. In New York.

It had to represent.

“When I got to a taste that reminded me of back home, I thought, ‘People would pay for this,’” said the Windy City native. It was only then that he started looking for a location.

The cozy MacDougal Street spot he opened in 2013 offers diners some serious Chicago eats. In addition to the seven varieties of deep-dish, there are also seven types of Chicago thin crust pizza (yes, it’s a thing), a Chicago-style hot dog, and an Italian beef sandwich. 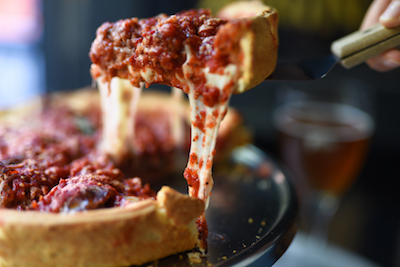 The Meat Lovers at Emmett’s (photo by B.A. Van Sise)

FORDHAM magazine’s staff stopped in to Emmett’s for lunch on a recent Friday in October. The pies, made to order, can’t be rushed. No matter, though. The sunlight pouring in from the front windows, the fall breeze, and the ladies lingering over wine at the bar with their shopping bags reminded us that we weren’t in a rush, either. We sampled a couple of draft brews from Chicago, though the extensive beer and wine lists offered plenty of domestic and imported options.

The pizzas arrived on a silver pedestal accompanied by a small hourglass—warning  us to give the thick, substantial pies two minutes to settle. Topped with bold, chunky tomato sauce that was pleasantly tangy, and filled with plenty of oozing-yet-chewy mozzarella, these 10-inch pies were admirably contained by a sturdy, slightly crunchy, two-inch-at-the-edge crust.

The Italian beef sandwich and the Chicago hot dog—totally foreign to us Northeasterners—were both piled with all sorts of flavorful accoutrements. The beef came with giardiniera, a pickled blend of hot peppers and other vegetables, topping the almost pillowy bed of slow-roasted meat, which had a kick of its own. And the dog was covered with (organic) tomatoes, onions, and neon green relish.

It’s easy to tell that Burke takes care with his ingredients; the basil was fresh, the spices robust, and the sausage in our Meat Lovers pie was something worthy of your grandmother’s Sunday sauce. He gets it from Teitel Brothers on Arthur Avenue. “I spent time there in my days at Rose Hill and loved their cheeses, loved their sausage. When you walk in it feels like a real Italian food purveyor. It was fun to revisit the place.”

Burke had the idea for Emmett’s while he was a Fordham student. As a newcomer to New York, he was surprised at the city’s lack of authentic deep-dish. “I thought that was crazy, because growing up in Chicago, it’s quite common for people to eat it on a regular basis,” he said. In his sophomore year at the Gabelli School, he was charged with designing a company for a marketing class, and he came up with Emmett’s. “Looking back, the idea hasn’t really changed much,” he said. “It’s a neighborhood-style restaurant that serves foods I grew up with and missed.”

So does Burke get ribbed about bringing deep-dish to a city that lives and dies by its New York slice? Sure. But it’s all in good fun.

“You have to have fun with it, because it’s a constant thing. You have to play it up and embrace it. I love New York. I’ve spent almost half my life here. … And Chicago is who I am and it is a city I’m very, very proud of. I really don’t feel that the city gets as much respect as it deserves, whether it’s culturally or in the culinary world. … I think a lot has to do with this Chicago-New York rivalry.”

Two years ago, when the Mets played the Cubs in the National League Championships, Burke made a bet with pizza maker Mark Iacono, owner of Lucali in Brooklyn, a favorite of Beyoncé and Jay-Z. If the Cubs lost, Burke would have to make pizza at Lucali, and if the Mets lost, Iacono would have to try his hand at some deep-dish. The Mets won, but Burke has yet to make good on the bet. “We haven’t done that yet. He doesn’t want me to disrespect the oven,” he said, laughing. “But it’ll happen.”

Burke delivered pizzas in high school, but that was about as much culinary experience as he had before his pizza experimenting. At the Gabelli School he studied finance, interning at Merrill Lynch. “I really kind of cut my teeth in New York City at a young age, and that was really fun,” he said. After Fordham, he worked for a hedge fund then a bank in Chicago that transferred him back to New York when the financial crisis hit. They proposed a promotion in San Francisco, and Burke realized his heart wasn’t in that world anymore. So he took some time off and decided to pursue his pizza idea.

“I would say the first thing that really helped me was that I didn’t know anything. It was humbling in the sense that if you want to learn something, you have to start from zero and learn all the steps,” he said.

Burke’s buddy Brett Danahy, a friend from his Fordham days and a fellow restaurateur, has watched Emmett’s progression from endless pizza tinkering to a successful restaurant with up to a two-hour wait on weekend nights. He said he’s impressed with his friend’s execution of his college idea.

“The void in the marketplace, he’s not the first to see that,” said Danahy, a sports agent and an owner of Ledger restaurant in Salem, Massachusetts. “To be able to grow and focus on improvement—that’s the real magic.” Burke was “always pretty good at not being satisfied,” he said.

Danahy gets to Emmett’s about a dozen times a year. “It’s what I miss about New York, the little neighborhood spots,” he said. “Emmett’s is truly a community. People know him and ask for him and Dillon [Burke’s brother who bartends and helps manage the restaurant]. That is the core of that place.” 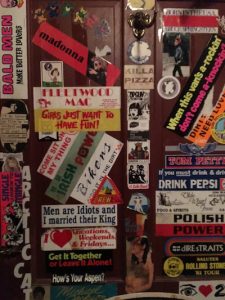 Burke cultivates a friendly café vibe and decorates the place with charming curiosities. He’s covered the bathroom doors with stickers from ’80s concerts and classic old slogans. And hanging behind the bar are pink, blue, and green bills of foreign currency—some given to him by customers, including travelers from South Korea and India.

And he’s still tinkering with his recipes, trying new ingredients all the time.

“It’s still constantly trial and error, because you are never going to make the perfect pizza or have the perfect golf swing,” said Burke, an avid golfer who played at Fordham, “but it’s a process, which is really fun.” Though he lives just a few blocks from the restaurant, he’s also got a place in Westchester with a garden and a greenhouse. He wants to start canning his own tomatoes and try his hand at an heirloom tomato sauce.

But for as much heart as Burke puts into his pizza, he’ll be the first to say it’s not all about the food. “Some people come in, they won’t even eat pizza,” he said. “They may have a glass of wine or a beer and just chat with their friends. We have really fostered this nice, local, neighborhood gathering.”