skip to main content
Return to Fordham University
You are at:Home»Fordham Magazine»Alumni News»Elizabeth I. McCann, Tony-Award Winning Producer and Mentor to Fordham Students, Dies at 90
Photo by Martha Swope
Elizabeth Ireland McCann, LAW ’66, a glass-ceiling-breaking producer who earned nine Tony Awards and helped mount more than 60 productions on and off-Broadway in a five-decade career in theater, died of cancer on September 9 at Calvary Hospital in the Bronx. She was 90.

“Obviously she pioneered the way for a lot of women,” McCann’s longtime friend and associate Kristen Luciana told the Daily News. “But Liz was so much more than a great female Broadway producer. She was a great Broadway producer—full stop.”

McCann rose to prominence as one half of McCann & Nugent Productions, a company she formed with Nelle Nugent in 1976. Together they produced a string of critically acclaimed hits including Amadeus (1981), Dracula (1977), and The Elephant Man (1979).

“The theater is a male-oriented world,” McCann told The New York Times Magazine in 1981. “And, sure, we’re women. I just don’t think of producing as being a problem for a woman. I think, essentially, the theater is desperate for success and product and ideas. Therefore, I don’t think anybody cares as much where those things come from as they think they care.”

Those ideas and what Playbill called McCann’s “taste for serious dramas” undoubtedly gave rise to her relationship with lauded playwright Edward Albee. She produced three of his works: the Pulitzer Prize-winning Three Tall Women, The Play About the Baby, and The Goat, or Who is Sylvia?, which won the 2002 Tony Award for best play.

“Every once in a while, a playwright will be lucky enough to run into a producer who is crazy—who is willing to take chances, who feels that a producer’s responsibility is to find work you think really should be seen, to whom financial concern is not the main adventure,” Albee said of McCann in 2004. “The main adventure is trying to get plays on.”

Discovering the ‘Magic’ of Broadway

McCann was born in New York City on March 29, 1931, the only child of Patrick and Rebecca McCann, who had immigrated to New York from Scotland. She grew up in Manhattan’s Garment District, not at all far from what would become her second home: the Theater District. Despite this proximity, McCann did not harbor a childhood love of theater. Her father, who worked as a subway motorman, and her mother, a housewife, weren’t “wildly interested in culture,” McCann told the Times.

In fact, she was forced, all but kicking and screaming, to attend a theater production when she was 14 or 15. The show was Cyrano de Bergerac starring José Ferrer. Her cousin had an extra ticket, and McCann’s mother made her go.

“That was it,” McCann shared in a CUNY-TV interview. “It was just magic. From then on, I wanted to see theater. Now, that took some saving up of allowances to … buy a $3 seat, but that just blew me away, that production.”

McCann attended Manhatanville College and, upon graduating in 1952 considered a few options, none of which included a career in the theater. “I could get married, I could become a nun, or I could become a business rep for the telephone company,” she told the Times. “Since neither God nor man seemed determined to take me for his bride, I settled on the telephone company.” 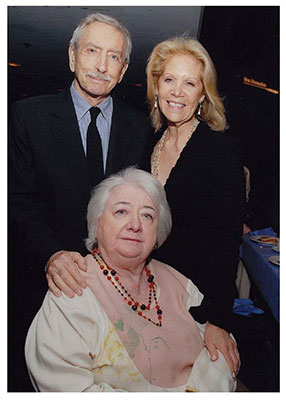 Ultimately though, a chance meeting with a nun at Manhattanville led her to abandon that plan, according to Madeline Felix, FCLC ’08, who worked with McCann as an undergraduate at Fordham. McCann became her mentor, and the two remained close friends until McCann’s passing.

During a series of unpublished oral history interviews, McCann told Felix that “the telephone companies were loaded with Irish Catholic girls from colleges” back then, so, since she didn’t really know what she wanted to do, that “seemed a good bet.”

Instead, thinking of becoming a drama teacher, McCann pursued a master’s degree in English literature at Columbia University.

When McCann graduated from Columbia two years later, she began working as an unpaid intern at Proscenium Productions, based at Cherry Lane Theater in Greenwich Village. Unsatisfied with the theater gigs she’d secured thus far, McCann believed that if she got a law degree, she could practice theatrical law.

She enrolled at Fordham Law, graduated in 1966, and passed the New York bar exam. After practicing law for about a year, James Nederlander hired her to be managing director of his newly acquired Palace Theater. McCann later joked that Nederlander’s own unrealized dream of becoming a lawyer and his respect for strong, no-nonsense women who reminded him of his mother were both ticks in her favor.

It turned out to be a fateful hire. Nugent worked for Nederlander as well, and in 1976, the two women struck out on their own, forming their now-legendary production company in the old Paramount Building on Broadway. From 1978 to 1982, their productions earned five back-to-back Tony Awards: Dracula, The Elephant Man, Morning’s at Seven, Amadeus, and The Life and Adventures of Nicholas Nickleby. And McCann’s partnerships with other producers earned her four more Tony Awards: for The Goat, or Who Is Sylvia?; Copenhagen, a play about physicists and the development of the atomic bomb; and revivals of Arthur Miller’s A View from the Bridge and the musical Hair.

Her latest producing effort, Hangmen, never officially opened. Its previews had just wrapped in early 2020 when the COVID-19 pandemic forced a Broadway shutdown that’s only recently been lifted.

Offering the Next Generation a Leg Up

McCann was known for her willingness to nurture up-and-coming talent and mentor students interested in theater—including Fordham alumni John Johnson, FCLC ’02, now a multiple Tony Award-winning producer in his own right; and Frank DiLella, FCLC ’06, host of Spectrum News NY1’s On Stage. Her position as managing producer of the Tony Awards show—and her lasting friendship with Larry Sacharow, former director of the Fordham Theatre program who directed two of McCann’s Albee productions: Three Tall Women and Beckett/Albee—afforded her plenty of opportunity to do so.

In a 2014 interview with Fordham Magazine, Johnson, who began working with McCann when he was an undergraduate and collaborated with her on the 2009 revival of Hair, referred to her as a “third grandmother” who gave him “priceless” career advice during the decade or so he worked with her.

“She basically gave me the base of my career in terms of the knowledge that I needed for it, whether it was how to know how to read a box office statement or a wrap report, all the way to how she interacted with artists and creatives … with stagehands and crew members,” Johnson said upon McCann’s passing.

“She essentially shattered the glass ceiling of Broadway,” he added, stressing that McCann and Nugent’s refusal to be “pushed aside” has given every subsequent producer the opportunity “to stand on those shoulders.”

A funeral Mass was held for McCann on Monday, September 13, at the Church of Saint Paul the Apostle, across the street from Fordham’s Lincoln Center campus. A recording of the Mass is available online.