skip to main content
Return to Fordham University
You are at:Home»Fordham Magazine»Features»Catching up with Dr. C

The affable, tough-minded Joseph Cammarosano, FCRH ’47, GSAS ’56, has seen nearly 75 years of Fordham history—and left his mark on much of it.

“If Fordham is alive and flourishing today, it is due to no one more than to Joe.”

That’s what James Finlay, SJ, Fordham’s 30th president, said 40 years ago about Joseph Cammarosano, PhD, the economist, professor, and administrator whose steady hand helped guide the University through the turbulent late 1960s, when student unrest and fiscal troubles threatened to sink colleges across the country.

The 92-year-old Cammarosano—affectionately known as Dr. C—gave up his administrative duties in the late 1980s, but he’s still teaching. And next year, when Fordham begins a yearlong celebration of its 175th anniversary, he’ll be marking his 75th.

“I only missed the first 100 years,” says Cammarosano, who enrolled at Fordham as a freshman in 1941. “In those days, the squirrels outnumbered the students—and they didn’t pay tuition!” 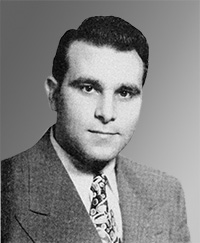 In the 1948 Maroon yearbook, Cammarosano’s classmates noted how his “infectious grin belies his serious application to school work.”

Cammarosano grew up in Mount Vernon, New York, just across the Bronx’s northern border. “My father was a contractor, and my mother was a very fine seamstress,” he says, recalling how his parents, who emigrated from Sorrento, Italy, worked hard to give him and his brother opportunities they themselves didn’t have. “My mom ultimately did the heavy lifting,” he says, “because my dad, although he was a great role model for me, passed on rather early in my life.”

War interrupted Cammarosano’s studies at Fordham. By 1943, he was a member of the Army Signal Corps, serving mostly in England and Belgium. “The war ended just before I was ready to load up and go to Japan,” he says, so he returned to Fordham instead, enrolling in an accelerated program. “It was hurry up and run. We’d already lost three years in the service.” He graduated magna cum laude in 1947 and went to work as a U.S. customs inspector. After getting a master’s degree at NYU, he returned to Fordham, where he began teaching economics in 1955, earning a doctorate in the subject the following year.

In 1961, Cammarosano took a consequential sabbatical, joining the Kennedy administration as an economist in the U.S. Bureau of the Budget. A year later, he worked in the New York State Department of Taxation and Finance. Bolstered by his government service, he was elected president of the Fordham Faculty Senate in 1965, the first to hold that position. And as the University started to encounter serious financial problems in the late 1960s, he was put in a place to help.

By June 1968, Fordham was operating at a $2 million deficit, and Cammarosano, who’d been chair of the faculty budget committee, was named executive vice president. Together with the University’s treasurer, Brother James Kenny, SJ, and the academic president, Paul Reiss, PhD, GSAS ’54, he fought to help Fordham avoid bankruptcy.

“How did I get into this mess?” he asks now. “Out of the Bureau of the Budget. I knew what budgeting was all about, and that’s what I put into practice. I learned something from President Kennedy. He put a strict limit on the budget. Everyone thought he was a spendthrift, and he wanted to prove the contrary.”

During the late ’60s, nobody could have accused Cammarosano of being a spendthrift. Tightfisted was more like it.

“I always wore a black hat, and Father Walsh, to the extent that he could, wore the white hat, although it was probably a gray hat,” he says, referring to Michael Walsh, SJ, president of Fordham from 1969 to 1972.

Cammarosano put a stop to all new construction. Maintenance was deferred. He even posted signs on the Xerox machines: “Why don’t you try carbon?” Like Cammarosano, the suggestion was unfailingly polite. He says it was more psychological ploy than cost-saving measure. “I wanted people to know we were in dire straits, and we had to pull ourselves out of this.”

By 1970, Fordham’s $2 million deficit had been transformed into a $2 million surplus, thanks in part to the advent of Bundy Aid (support for private colleges from New York state), the opening of what became Fordham College at Lincoln Center, and Cammarosano’s fiscal discipline.

“No one lost a single job,” he says. “I felt if we could hold expenses down, do no more than we did last year, and with a very modest tuition increase and the Lincoln Center campus coming on stream, we may make it in very short order. That was the formula.”

A Campus in Turmoil

As the fiscal crisis cooled, student protests intensified on campus. “It pretty much had to do with the Vietnam War and the ROTC’s presence on campus,” Cammarosano says of the wave of demonstrations in 1969 and 1970. “The students took over my office two or three times. I’d come in in the morning, and my windows would be smashed. There was a fire in the McGinley Center. They did a lot of damage.”

Cammarosano was surprised and disappointed by the students’ behavior (“it wasn’t the way they behaved in class”), but he could understand their grievances to a point. “I could relate to them, but don’t take it out on us,” he told them. “I would stop the war, but I had no control.” 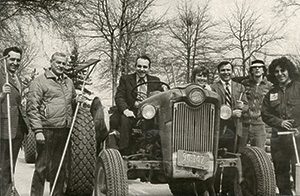 In the 1970s and ’80s, Cammarosano (center) led a campaign for the re-greening of Fordham, helping to restore Edwards Parade to glory.

Characteristically, he found some humor in the situation. “The students took over the switchboard at one point, and when someone called for me, they said, ‘No, he’s no longer with us, we fired him.’ I almost wished they had fired me!” he says, laughing.

To deal effectively with the unrest, he says, “You had to be reserved, to know when to hold back, when to move forward. We took a lot of hits, but I’m glad we were able to keep our perspective. And we survived.”

Not all of Cammarosano’s “old Fordham war stories,” as he calls them, are as heavy as the financial crisis or student protests. He also fought to transform Edwards Parade, which he says had become “a dog patch.” During the 1970s and ’80s, he initiated periodic “spring offensives for the re-greening of Fordham,” joining facilities workers as they seeded grass, pruned and planted trees, and constructed footpaths.

“I used to say, keeping that grass green means 100 students,” he says, referring to Edwards Parade’s appeal to prospective undergraduates. These days, he’s impressed by the landscaping prowess of the facilities team. “I keep an eye on it, and they’re doing a great job.” 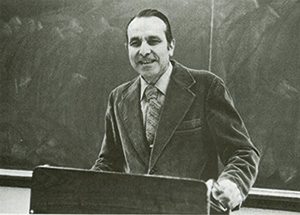 Cammarosano in the classroom during the 1970s.

Some of Cammarosano’s greatest contributions to Fordham, however, have been more personal than institutional. At the Faculty Convocation in fall 1976, the University honored him not only for his administrative skills but also for his work in the classroom, calling him an “exacting taskmaster” who earned his students’ appreciation by preparing “meticulously” and lecturing “dynamically.”

E. Gerald Corrigan, GSAS ’65, ’71, a managing director of Goldman Sachs and a former president of the Federal Reserve Bank of New York, studied with Cammarosano during the 1960s, helping him produce economic studies of the Bronx and the Brooklyn Navy Yard.

“He’s a dynamo,” Corrigan says, recalling how his Fordham mentor would deliver “two-hour lectures nonstop at a fevered pitch.”

Cammarosano is quick to celebrate his many students and colleagues, including all six University presidents since the mid-’60s, each of whom has come to him for counsel. A firstborn son of Italian immigrants, he’s now the head of a three-generation Fordham family.

“All three of my kids are Fordham graduates,” he says. “My daughter’s son graduated from the Law School last May, and now I have a granddaughter in the Gabelli School of Business.”

And he is particularly grateful to the Jesuits with whom he has studied and worked for nearly 75 years.

“They’ve been a great influence on my life,” he says. “The way they deport themselves, you couldn’t help but emulate them.”

Roger Wines, PhD, FCRH ’54, professor emeritus of history at Fordham, served on Cammarosano’s budget committee during the fiscal crisis and worked with him as a member of the Faculty Senate.

“His whole life of service without pretensions is really a tribute not only to Joe but to the old-time Jesuits who were our dedicated teachers at Fordham,” Wines says. “They taught us by example about working selflessly for a good cause. Realistically, but selflessly.”

Last May, at a dinner celebrating the 50th anniversary of the Faculty Senate, Wines delivered a tribute to Cammarosano, keeping it brief, he says, so as not to embarrass his friend, calling him “a mentor, a man of character, a good family man, husband of his late wife Rosalie, father, grandfather, and … a talented scholar and teacher.”

“There are not enough words to express adequately the appreciation owed to him by several generations of Fordham faculty and students,” Wines concluded. “Let us just say two: Thank you.”