skip to main content
Return to Fordham University
You are at:Home»Editor's Picks»Denzel’s Glory Days: Golden Globe Winner Got His Start on a Fordham Stage
Above: Denzel Washington speaks to Fordham Theatre students during an October 2012 visit to the Lincoln Center campus. Photo by Tom Stoelker
Fordham alumnus Denzel Washington, FCLC ’77, received a lifetime achievement award at the 2016 Golden Globes Sunday night, with Tom Hanks introducing him as one of the “immortals of the silver screen.”

Hanks named several actors—Garbo, Hepburn, Brando, and others—who “need only one name to conjure the gestalt of their great artistry.”

“The cliché ‘the list goes on and on’ does not apply here,” he said, “because it doesn’t. The list is finite … but it includes the actor who is being given the Cecil B. DeMille Award tonight.”

Hanks, Washington’s co-star in the 1993 film Philadelphia, presented a montage of highlights from the actor’s acclaimed performances in Malcolm X, The Hurricane, Training Day, and Flight, among other films.

“These clips will remind us that a single name can be a superlative, synonymous with extraordinary,” he said. “A single name can define an artist who is a peer and equal of all of the greatest legends of our craft.

“And if Washington doesn’t ring out loud enough, then let the first name carry all the weight—and that name is Denzel.”

Upon receiving the award, Washington said the honor left him “speechless,” literally and figuratively. “I lost my speech,” he acknowledged when he got to the stage.

But his wife, Paulette, and three of their four children joined him. With his family’s warm support, the actor charmed viewers, thanking his agents, the Hollywood Foreign Press Association (which presents the annual lifetime achievement award), and his mother “for convincing my father that we needed more than 25-watt bulbs. He thought that we could save money.”

A Promising Stage Debut: “Not Only Beauty but Love, Hatred, Majesty, Violence” 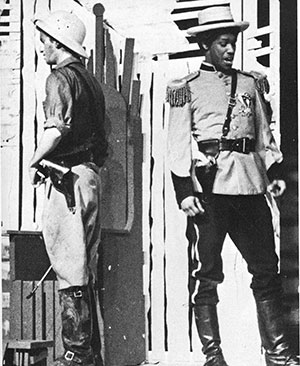 A Star Is Born: Denzel Washington plays the title role in a Fordham Theatre production of Eugene O’Neill’s The Emperor Jones.

The renowned actor, who grew up in Mount Vernon, New York, did not set out to become one of Hollywood’s brightest lights.

As an undergraduate at Fordham College at Rose Hill during the 1970s, he played basketball and considered a career in medicine before shifting to journalism. During his junior year, however, he transferred to Fordham College at Lincoln Center, where he found his calling on stage in the theatre program.

“I bluffed my way into my first [college acting] job,” Washington told Merv Griffin in 1985, eight years after earning his Fordham degree. “They were doing Eugene O’Neill’s The Emperor Jones, and I was up for the leading role in the first play I had ever done. …  I got good feedback right away, which was very important, and I said, ‘Oh, this is what I’m supposed to do.’”

One of the first people at Fordham to recognize Washington’s potential was Robert Stone, a longtime English professor at the University who decades earlier had acted with the legendary Paul Robeson in a Broadway production of Shakespeare’s Othello.

“Denzel gave the best performance of Othello I’d ever seen,” Stone told FORDHAM magazine in 1990. “He has something which even Robeson didn’t have … not only beauty but love, hatred, majesty, violence.”

Academy Award-winning actor José Ferrer, who had played Iago in Othello with Robeson, was among those invited by Stone to see the young star in a Fordham production of the play.

VIDEO: Watch Denzel Washington reminisce about his Fordham days and talk about the joys of being a new father during a January 1985 appearance on The Merv Griffin Show.

After graduating from Fordham, Washington received critical acclaim for his work off Broadway and in several feature films. And he rose to fame playing Dr. Phillip Chandler on the popular TV series St. Elsewhere from 1982 to 1988.

In 1989, his film career took off with the movie Glory. He played Trip, a fugitive slave who joins other African-American soldiers to fight in the “all-colored” 54th Massachusetts Regiment during the Civil War.

Trip is a complex character—angry and rebellious, an instigator—and the role was attractive to Washington, he said, because it contradicted Hollywood’s stereotypical depictions of blacks in American history.

“Some people say, ‘Trip could never have been that outspoken; it’s too modern,’ and I say you’ve been affected by Gone with the Wind. Not everyone talked like that woman with the high voice; we weren’t all just victims,” he told FORDHAM magazine in 1990, after winning a Golden Globe and an Academy Award for his work in the film.

In saluting Washington at the Golden Globes Sunday night, Hanks referred to the actor’s “mysterious power not just to hold our attention but to demand it.” That power is especially evident in Glory during this scene in which Washington’s character is whipped.

A Model for Students: “Take What You Have and Use It for Good”

Throughout his long film career, Washington has not forgotten his acting roots on stage. He has returned to New York to work on Broadway, winning the 2010 Tony Award for his lead role in the revival of August Wilson’s Fences.

And he has long been a champion of theater education at Fordham. The two-time Oscar winner served on the University’s Board of Trustees from 1994 to 2000. And in 2011, he established the Denzel Washington Chair in Theatre with a $2 million gift to the University. He also contributed $250,000 to establish an endowed scholarship fund for students in the Fordham Theatre program.

“It’s not what you have; it’s what you do with what you have,” he told Fordham students during an October 2012 visit to campus.

“My life is not typical in this profession, but one thing I know I have in common with everybody here is the ability to give back. Take what you have and use it for good.”