Denzel Washington, FCLC ’77, received the inaugural Ossie Davis & Ruby Dee Living Legends Award from the Crossroads Theatre Company in New Brunswick, New Jersey, on October 19 during a ceremony that, perhaps more than any other in the celebrated actor’s career, highlighted his deep connections to Fordham University.

Presenting Washington with the award was Fordham Trustee Anthony Carter, FCRH ’76, the president of Crossroads’ board of trustees.

“Forty-six years ago on the Fordham University Bronx campus, a place we called 80 acres of paradise, our home away from home, is where I met our honoree Denzel Washington, and where our friendship began,” Carter said during the ceremony at the State Theatre New Jersey.

He praised Washington for his “stellar body of work” and for taking “acting and the industry far beyond where anyone else has.” But he also honored Washington in deeply personal terms. “I see you beyond being a great actor. I see you as a man of principle; determined, focused and disciplined. … I know you to be a great man and a great friend who just happens to be great at what you do. And we all cherish that.” 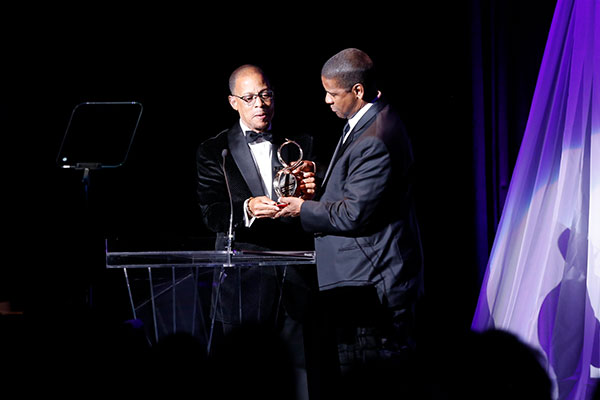 In his acceptance speech, Washington spoke to his faith, saying, “Man gives the award; God gives the reward.” He said he was “grateful, honored, and humbled” by the recognition, and “blessed to have a strong family.”

“But the reality is, I’m just beginning. The rest of my life is dedicated to glorifying God, to being a living witness of the grace of God, the mercy of God, the patience of God.”

He thanked Crossroads for recognizing Ossie Davis, Ruby Dee, and others “who helped to teach me to be the actor I’m trying to become,” adding, “I am hopeful and humbled by the possibilities to come, on the stage and in the world.”

Washington, whose first stage role was in a 1975 Fordham Theatre production of The Emperor Jones, said later that those possibilities might include returning to Crossroads to star in or direct a production.

David Alan Grier hosted the ceremony, and various other luminaries paid tribute to Washington through performances and speeches, including Courtney B. Vance, This Is Us star Susan Kelechi Watson, Phylicia Rashad, and Stephen McKinley Henderson. 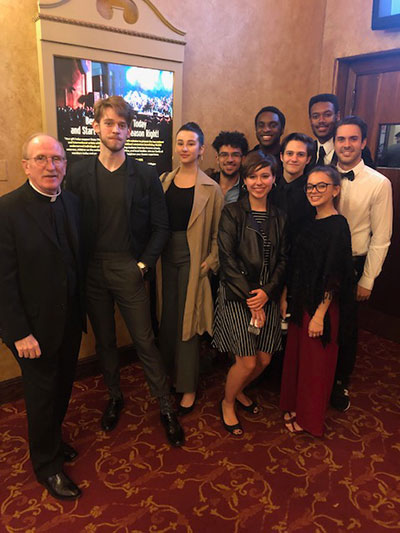 Joseph M. McShane, S.J. (left), president of Fordham, with a group of Fordham Theatre students who attended the ceremony as guests of Fordham Trustee Anthony Carter (Photo by Roger A. Milici Jr.)

Rashad and Henderson are former holders of the Denzel Washington Endowed Chair in Theatre at Fordham, a professorship Washington established with a $2 million gift to the University in 2011. That same year, he also made a $250,000 gift to establish an endowed scholarship for Fordham Theatre students, 12 of whom attended the ceremony in New Brunswick.

Carter gave the Fordham students a shout-out during the ceremony and saluted Washington for his commitment not only “to the generation of actors here and around the world who stand successfully on your shoulders” but also to “the next generation of great actors.”

The Crossroads Theatre Company, which opened in New Brunswick in 1978, focuses on telling stories of the African diaspora, and in 1999, it earned the Tony Award for Outstanding Regional Theatre. After two years on the road, the company, which is the only professional black theater company in New Jersey, has settled in as a resident member of the New Brunswick Performing Arts Center.