skip to main content
Return to Fordham University
You are at:Home»Fordham Magazine»Deanna Howes Spiro, Fordham’s Alumni Leader in Washington, D.C., Reflects on the ‘Extraordinary Moments’ of Being a Ram
Deanna Howes Spiro, FCRH ’07, spoke at Gonzaga College High School in March 2022. Photo courtesy of Gonzaga College High School
The first time Deanna Howes Spiro heard the name Fordham was during an assembly at her all-girls Catholic high school in Kensington, Maryland. Everything she learned about the University—from its New York location and strong academics to its core Jesuit values—resonated with her. When she stepped onto the Rose Hill campus in the Bronx a couple of years later, she sensed she was home.

That thread of connection didn’t stop unspooling after four years, though: When Spiro returned to the D.C. area after graduating from Fordham College at Rose Hill in 2007, she joined the Fordham Alumni Chapter of Washington, D.C., and that ultimately led her to her first job, as manager of information services with the Association of Jesuit Colleges and Universities (AJCU).

Today, more than 10 years later, she’s not only the vice president of communications at AJCU, which comprises all 27 Jesuit colleges and universities in the U.S., but also president of the Fordham alumni chapter that helped jumpstart her career. And now, as always, her focus is on helping fellow Rams connect with each other.

This month, the D.C. chapter is hosting two events: an outing to a Washington Spirit soccer game on September 17 and a September 21 reception welcoming Fordham’s new president, Tania Tetlow, as part of her tour to meet with alumni throughout the U.S. and abroad.

Each year, Spiro’s high school welcomed back graduates from the previous year, inviting them to share experiences from their first semester at college with current students. It was during this assembly that she heard from a former theater acquaintance about Fordham and realized that it ticked her college checklist boxes.

“I had applied to, I think, about seven other schools besides Fordham,” Spiro said. “But the first time that I went there in the fall of my senior year with my dad and my brother, it was really just love at first sight.” (Spiro’s brother, John A. Howes Jr., also became a Ram, graduating from Fordham College at Rose Hill in 2009.)

A communications and media studies major, Spiro made the most of her time on campus, having grown up being encouraged by her parents to get involved “not just in extracurriculars or hobbies that were passions … but also through service, too,” she said.

In addition to being a part of the Fordham Club, a combination honor society, advisory group, and fraternity; and a tour guide with the Rose Hill Society, Spiro was able to explore one of her passions: singing. She was a member of the University Choir for four years and vice president of the choir her senior year. She performed with the choir at Carnegie Hall during her first year and went on a singing trip through Spain the following summer.

Amid her classes, extracurriculars, and excursions, though, Spiro said the most important thing Fordham taught her was how to find herself—and her place in the world.

“In those formative years between 18 and 22, when you’re trying to figure out your place in the world and how your talents can really contribute and how you can make a positive contribution—I think that Fordham really helped me figure that out and navigate the next chapter in my life,” she said.

Sweet Symbiosis: The AJCU and the Fordham Alumni Chapter of D.C.

Since accepting that first position at AJCU in 2007, Spiro has served as the organization’s director of communications and, since June 2020, vice president of communications. She joined the Fordham alumni chapter’s board at roughly the same time, serving as president for almost a decade now. While the two roles may not seem intertwined from the outside, to Spiro, her work at each organization informs and benefits the other, with collaboration and teamwork underlining it all.

“The work that I do with the alumni chapter overlaps and has helped strengthen my work when it comes to alumni relations at AJCU,” she said. “We all want to achieve the same goal,” bringing people together for mutual benefits.

On the AJCU side, one way she’s done that is by advocating the sharing of resources and a sense of pride among Jesuit colleges and universities. Spiro was behind the #JesuitEducated campaign when Pope Francis, the first Jesuit priest to be elected pope, came to the United States in 2015. She and her collaborators used a tagline, “Transformational leaders are Jesuit educated,” as the basis for a marketing campaign. They wanted to highlight that more than just preparing students to get a job, Jesuit colleges and universities prepare students for careers of impact by teaching them how to think, dig deep, and seek a greater purpose.

And on the Fordham side, the chapter supports the Alumni Chapter of Washington, D.C., Endowed Scholarship, which helps make it possible for more high-achieving students from the Washington, D.C., area to pursue full-time undergraduate study at Fordham. 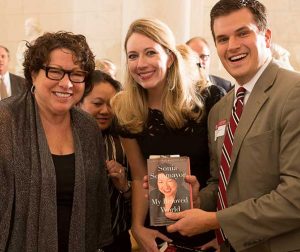 Supreme Court Justice Sonia Sotomayor, Spiro, and her brother, John Howes, FCRH ’09, in 2015 when the Alumni Chapter of Washington, D.C., gave the Brien McMahon Memorial Award for the Distinguished Public Service to Sotomayor.

Heading up communications for a national association is a high-profile, demanding job, but Spiro said one of the things she loves about working at the AJCU is the work-life balance—which for her has meant the ability to pursue graduate study at Johns Hopkins University, where she earned a master’s degree in communications in 2012, and to start a family. She married Peter Spiro in 2017, and they now have a 9-month-old daughter, Holly.

“Even before becoming a mom, I was always afforded the opportunity to have a really good work-life balance,” she said. “Don’t get me wrong, it’s a busy job, but I’ve been able to do other things along the sides,” such as accept gigs as a freelance singer.

She’s performed the national anthem at various Jesuit colleges and universities, including Creighton, Gonzaga, and even Fordham before the Homecoming game in 2015. Lately, however, Spiro’s performances are tailored for an audience of one: She performs The Sound of Music’s “Do Re Mi,” theatrical hand signals and all, for her infant daughter, Holly.

Over the years, she said she’s been able to commit her time to a number of activities and organizations close to her heart, from handling media relations for a major North American Lithuanian folk-dance festival in 2016—her mother’s family is Lithuanian—to singing in a professional choir for a year, requiring her to sing for 10 Masses between Palm Sunday and Easter Sunday.

Though she’ll be stepping down from her role as leader of Fordham’s Washington, D.C., alumni chapter at the end of the academic year, she’s “proud of the way that we’ve been able to continue reaching alumni where they are and producing a variety of events to fit all of the needs in all of the different stages of life”—whether that’s through a baseball game outing, a happy hour, or a service project.

Spiro has had some “really extraordinary moments” as president, from dining at the Supreme Court in 2015 when the chapter gave the Brien McMahon Memorial Award for the Distinguished Public Service to Justice Sonia Sotomayor to simply rallying around one another during the pandemic.

“I just feel so strongly connected to this school,” she said, thinking about the University’s effect on her life to date. “And every time that I return there, it just feels like a home away from home. Fordham really helped me to just figure out who I was and who I was going [to be].”

What are you most passionate about?
My family and friends, music—I play the piano and have a side career as a singer— writing, cooking, reading, spending time outdoors, and traveling.  And, of course, Jesuit higher education!

What’s the best piece of advice you’ve ever received?
Now that I’m a mom, I often reflect on two recent pieces of advice from both of my parents. From my dad: “The most important thing you can do for your children is to smile at them.” From my mom: “Always be confident in what you are doing as a parent.” I’m very grateful to have my parents living nearby, and for the many ways they help my husband and me with our daughter!

What’s your favorite place in New York City? In the world?
I actually never visited it until after graduating from Fordham, but the Brooklyn Bridge has become my favorite New York landmark in recent years. In a similar vein, the Eiffel Tower in Paris is one of my favorite places in the world; both are such staggering feats of engineering, architecture, and design that never fail to astound me!

Name a book that has had a lasting influence on you.
I was such a bookworm growing up, but kind of lost my love of reading for pleasure in my 20s, due to work, graduate school, etc. So, in my 30s, A Gentleman in Moscow was the book that helped me to get back into reading for pleasure and even start a virtual book club with family and friends that is still thriving, even as we (hopefully!) get out of the pandemic.

Who is the Fordham grad or professor you admire(d) most?
There are four professors—several of whom I have been fortunate to keep in touch with over the years—who were particularly helpful in teaching me how to become a stronger writer and more engaged student of the world: Christine Firer Hinze, James Kim, James van Oosting, and Andrew Tumminia. I also want to give a special shout-out to Rob Minotti, who conducted the University Choir during my four years at Fordham and helped me to grow as a singer and performer.