skip to main content
Return to Fordham University
You are at:Home»Fordham Magazine»Books»Dancing Through It 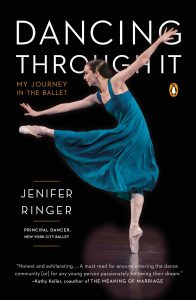 Dancing Through It: My Journey in the Ballet by Jenifer Ringer, FCLC ’98 (Penguin)

In the final pages of this memoir, Jenifer Ringer quotes the Book of Samuel: “And David danced before the Lord with all his might.” The biblical passage resonates with Ringer, who during a 23-year career with the New York City Ballet, strove mightily to endure the demands of the job. For a time, in her desire for perfection, she struggled with an eating disorder—something that came to national attention after a New York Times reviewer critiqued her performance in a 2010 production of The Nutcracker, writing that she “looked as if she’d eaten one sugar plum too many.” But Ringer, who was raised in South Carolina in a close-knit Christian family, used her faith to face the ensuing media attention and rise above the internal and external critics. During her roller-coaster career with the New York City Ballet—she retired in 2014 as a principal dancer—Ringer earned a bachelor’s degree from Fordham, married fellow dancer James Fayette, and had two children. Her memoir is a charming, candid, and inspiring tale of perseverance—and of triumph over the kind of body issues that plague too many young women.