skip to main content
Return to Fordham University
You are at:Home»Fordham Magazine»Books»Corruption in America 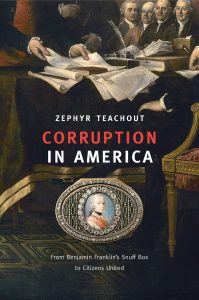 For most of U.S. legal history, corruption was considered broadly. It wasn’t just about “blatant bribes and theft from the public till,” Zephyr Teachout writes. It encompassed “many situations where politicians and public institutions serve private interests at the public’s expense.” And it took perceptions into account. That’s why in 1785, when King Louis XVI of France gave ambassador Benjamin Franklin a diamond-encrusted snuff box as a retirement gift, the framers of the Constitution were concerned that it could “interfere with Franklin’s obligations to the country at large.” Recent Supreme Court decisions, however, have diminished what the framers had in mind, Teachout argues, leading to the highly controversial Citizens United decision in 2010. That Supreme Court ruling, she writes, “effectively gave wealthy individuals and wealthy corporations the right to spend as much money as they wanted attempting to influence elections and policy.”

Teachout, who ran for governor of New York last year, wants to “bring corruption back … as an idea, something we fight and worry about.” She believes “the two most important solutions that require no Supreme Court backing are ideas advocated by Teddy Roosevelt: publicly funded elections and trust-busting.” She makes a compelling case for reform—and draws hope from Franklin, “whose own gift to the country,” she writes, “may have been his peculiar blend of persistent pessimism and persistent optimism.”