skip to main content
Return to Fordham University
You are at:Home»Fordham Magazine»Features»Consider the Rats: On the Ecology and Evolutionary Biology of the City’s Most Reviled Rodent
Illustrations by Louise Zergaeng Pomeroy

Where do they come from, and how do they get around? Fordham biologists produce the world’s first in-depth genetic study of brown rats, and investigate the mysterious, wily ways of New York’s biggest scourge.

New Yorkers love to hate their rats, shuddering whenever a pointy nose or a scaly tail peeks from behind a trash can or subway rail. So visitors to the First Street Green Art Park on New York’s Lower East Side were surprised one Saturday this past May when they came upon five street artists painting larger-than-life murals celebrating the city’s most reviled rodent—a rat giving the peace sign, a rat snuggled contently amid a vegetable ratatouille, a rat with an NYC baseball cap and a spray can, rats looking, well, cute.

The unusual project, “Street Art for Street Rats,” was intended to bring attention to the research of Fordham biology professor Jason Munshi-South, Ph.D., and his graduate students, who have spent the past four years trying to understand the species that, perhaps more than any other, has adapted itself to live side-by-side with humans in the urban environment.

“You’d think rats are so common, we’d know all about them, but in fact we don’t know very much about their ecology or evolutionary biology,” Munshi-South says.

Biologists don’t even know how many rats live in New York City. Estimates range from 250,000 to 2 million. Yet, argues Munshi-South, rats are as important to study as any other species, if not for their extreme resilience and adaptability, then for the insights into how we can fight back against the damage they cause and diseases they spread. 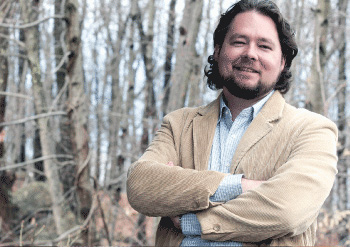 With the help of $670,000 in funding from the National Science Foundation, Munshi-South and his students have helped lift the veil of mystery to reveal the inner workings of New York’s rat population.

“The initial idea was to understand what a New York City rat is, from all ecological and evolutionary angles,” says Munshi-South. But the project soon expanded globally to examine where rats were coming from and how they got to New York. The lab put out a call to labs across the globe, and dozens of researchers from as far away as Japan and the Galápagos Islands sent in the genetic signatures of the rats in their neighborhoods—more than 300 samples in all. “It grew into an effort to understand the evolutionary history of rats all over the world,” he says.

Other animals have adapted to live in cities—birds, mice, wild turkeys, and coyotes, for example, have moved into urban green spaces across the country. But rats may be the most successful at exploiting the human environment, says Matthew Combs, a Ph.D. student in Munshi-South’s lab. They’re also highly social animals that, once they establish a colony, reproduce and expand rapidly, learning from one another where to find the best sources of food—and which danger spots to avoid. “They are able to take advantage of all the resources we provide, even in the face of all our attempts to eradicate them,” Combs says.

In order to trace the journeys of rats around the world, the biologists in Munshi-South’s lab have availed themselves of recent advances in genetic research and data analysis.

“Anytime a population undergoes major changes, when it shrinks or expands or mixes with other lineages, it leaves a residue in the genome,” explains Munshi-South, who has been teaching at Fordham since 2013. To detect those residues, the lab uses a “big data” approach. Rats have some 2.7 billion base pairs in their genome. Using techniques developed for the Human Genome Project, the researchers are able to show through successive subtle gene variations which rats are related to which others, tracing their progression across both time and space. 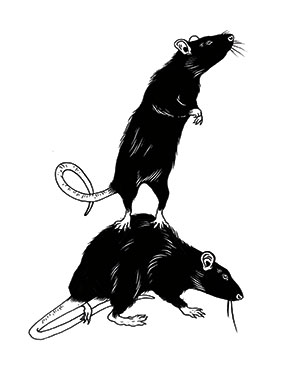 The New York rat is known by many names, including the common rat and the brown rat. But its official name, the Norway rat (Rattus norvegicus), is a misnomer. Emily Puckett, a postdoc in Munshi-South’s lab who analyzed more than 300 rat DNA samples from 30 countries, discovered that the species actually originated in Mongolia, transitioning from forests to farms to villages as they adapted to human food sources—probably thousands of years ago, with the advent of agriculture. From there, they expanded both east to Japan and western North America, and west to Europe, where in the 1700s they stowed away on British ships bound for the bustling port of New York.

To examine the history of rats closer to home, Munshi-South and Puckett got permission from the American Museum of Natural History to extract DNA from 100-year-old rat skulls and skins as a supplement to the samples they gathered from all over the city. They published their findings, the first in-depth study of its kind, in Proceedings of the Royal Society B, the flagship biological journal of the U.K.’s Royal Society.

While Munshi-South expected to see evidence of many waves of rat immigrants mixing in New York over time, mirroring the story of its human immigrants, that turned out not to be the case. In fact, all of the rats of New York can be traced to that initial wave in the 18th century, with little mixing with new arrivals since.

“We think that once rats get established and build big, healthy colonies, it’s hard for new rats to integrate and breed into the population,” he says. In other words, New York’s rats are so aggressive they fight off any newcomers. “That’s good news” for humans, he continues. “We are not at risk of novel diseases from a lot of new rats mixing with the local population.”

Combs has picked up the trail from there, looking at how rats are moving within New York. On any given day, he can be found setting and checking traps in every ZIP code of Manhattan, a difficult task given how adept rats are at avoiding danger. So far, he and his colleagues have caught more than 550 rats and produced genetic data for 250 of them since the start of the study.

“Most of the rats I trap are juveniles, only a couple weeks or a couple months old,” he says. “Those are the only ones foolish enough to walk into my traps.” 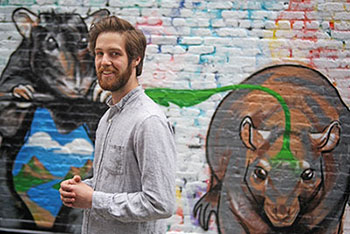 Fordham doctoral candidate Matthew Combs at the “Street Art for Street Rats” event he organized to help educate the public about the ecology of rats. (Photo by B.A. Van Sise)

To find his quarry, Combs targets out-of-the-way spots behind trash cans and in the corners of parks, looking for telltale signs of burrows, pellets, or the greasy smudge marks from sebum, oil of their fur that marks well-traveled pathways. He often receives help from residents hanging out on sidewalks or stoops who are only too happy to tell him where the rats live in their neighborhoods—sometimes even letting him into their backyards to trap them.

Once he traps the rats, he brings them back to the lab where he extracts DNA samples and analyzes them for differences. So far, his research has revealed rats to be creatures of habit, rarely venturing more than 30 to 150 meters from their colonies. When they do stray, they tend to head north and south, possibly following the long, unobstructed paths of sewers and subway lines. As a result, a subtle north-south genetic gradient exists along the island, with a break in midtown. 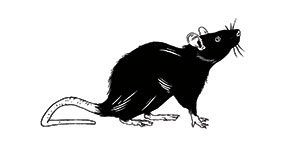 “There seems to be an uptown group of rats and a downtown group of rats, with less movement around the midtown region,” says Combs. That break may be due to the neighborhood’s lack of residential buildings and green space, impeding their progress.

The next step in the research is to use computer models to ask what environmental attributes—such as water sources, open soil, sewers, and subway lines—determine how rats are distributed within the space. In addition, Combs will look at demographic patterns of rats’ human neighbors to see if, for example, rats are more prominent in socioeconomically depressed areas, as some research suggests.

In addition to its intrinsic value in understanding a species that lives so closely with humans, the project has public health implications. Rats can be a menace, damaging infrastructure and spreading diseases such as salmonella and leptospirosis to dogs and humans. If city officials are better able to understand where rats are coming from and how they get around, they can better control how they spread. Munshi-South has been collaborating with the New York City health department to help officials refine their strategy for exterminating rats. While much of that work remains confidential, Munshi-South says that part of the project is locating major reservoirs of rat colonies from which the rats might be spreading.

At the same time, Munshi-South’s lab has continued collaborating with researchers in other cities. Just as humans have built different urban environments, so too might rats adapt to them differently, following different patterns of movement in the open spaces of New Orleans, the parks of Vancouver, or the favelas of Salvador, Brazil. Researchers from all three cities have recently visited Fordham to compare notes and research techniques that will help tease out the ecological differences of rats, which may be just as pronounced as the cultural differences of the humans they live with.

The recent “Street Art for Street Rats” event was conceived by Combs as a way to help educate the public about the ecology of rats in all its complexity. The spark came when he ran into Jonathan Neville, a friend from his undergrad days at Hamilton College, who is a co-founder of the Centre-fuge Public Art Project, which works to “transform neighborhood eyesores” with vibrant murals. 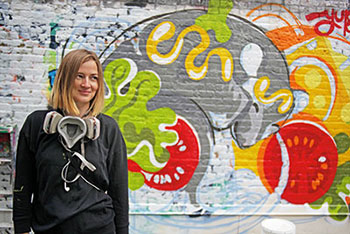 Graffiti artist Yu-baba with her mural in progress at “Street Art for Street Rats.” (Photo by B.A. Van Sise)

While the artists were painting, Munshi-South, Combs, and others from the lab were on hand to teach passersby about how they use genetics to trace the journeys of rats around the city. And they debunked some common myths, such as the misconception that there are more rats than people in New York (actually, they say, there are 250,000 to 2 million rats, compared to 8.4 million humans) or that rats are able to squeeze their skeletons flat (though they can fit in tight spaces). Even so, they realize there are limitations to the average New Yorker’s tolerance.

“A lot of people do respect them and think they are fascinating,” says Combs, who likes their feistiness and adaptability. “But if someone thinks they are a scourge and is just interested in getting rid of them, I won’t try and change their mind.”

—Michael Blanding is a journalist and the author of two books, including The Map Thief (Avery, 2014).