skip to main content
Return to Fordham University
You are at:Home»Fordham Magazine»City Sailors: Hudson River Community Sailing Helps New York Teens Navigate Their Home Waters and Set Sail for Success
Sailing Ahead: The nonprofit Hudson River Community Sailing provides academic and leadership training for city teens while giving adults an opportunity see Manhattan from a new point of view. Photo by Bud Glick
When Alex Baum graduated from Fordham in 2008 with a degree in international political economy, he contemplated a career in global development. Then a Fordham sailing teammate suggested a summer job at a nonprofit that was launching its program on Pier 66, just 34 blocks south of Fordham’s Lincoln Center campus. Its goal: to provide academic and leadership training for underserved New York City high school students while offering opportunities for adults to sail the lower Hudson along Manhattan’s western shores.

On one chilly morning in late April, Baum had his hands full. Students on spring break had arrived for a weeklong training program. He was on the phone booking an evening sail for an adult group. Later, he was interviewing a high school senior looking for an internship. “Our goal is to create a learning space for youth and adults,” says Baum, who grew up sailing on Lake Ontario in Rochester. “They are all part of our sailing community.”

HRCS’s $1.2 million operation is supported by a combination of public school funds, private philanthropy, and the annual fees paid by adult sailing students and the group’s 200 adult members. About 150 teens participate in the after-school program, which combines academics with sailing lessons in the spring and fall, and with boatbuilding in the winter. Students learn about the complex marine life in the Hudson, explore the troublesome issue of marine debris, and develop math skills, calculating how the angle and strength of the wind affects the boat as they ply the river alongside sleek cruise ships, speedy ferries, and heavily laden commercial barges. Students can earn high school credit in science, math, and physical education.

The nonprofit’s executive director is Fordham alumnus Robert Burke, FCRH ’88, GSE ’91, who had worked extensively in outdoor youth development at Outward Bound and  the National Outdoor Leadership School when he joined the board of HRCS at its inception in 2008. When founder Bill Bahen stepped down in 2012, the board turned to Burke to take the helm.

“I like the way HRCS brings a real cross-section of the community together,” Burke says. “And it’s great to give the kids the opportunity to sail a boat in one of the busiest harbors in the world. They have real responsibilities when they sail, and the kids step up.” 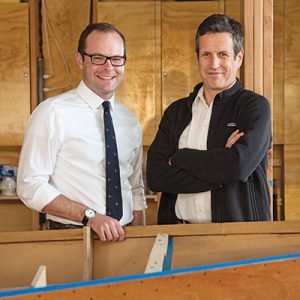 Earlier this spring, Burke led a team at the Harlem Yacht Club on City Island in the Bronx, readying HRCS’s fleet of J/24 keelboats for the 2016 sailing season. The group has 13 of the 24-foot boats, which are among the world’s most popular recreational and racing sailboats, and next year expects to add a 40-foot Beneteau, which will allow for more overnight trips for high school students. “Our model is working,” Burke says. “Our students are graduating from high school and going to college. Some even come back to teach with us.”

At the boathouse, the middle school students who arrived for their spring break training program got to work. One group consulted tidal charts to figure out which way the powerful Hudson was flowing that morning. They learned that the tide was coming in, flooding north at as much as 1.9 knots, a key element in planning their sail. Another group learned how to tie a bowline knot, while others worked on a problem about ocean debris, using an international database of ocean currents to determine where a piece of flotsam came from.

Assisting in the classes was Dawn Jones, a senior at the New York City Museum School on 17th Street. She recalled meeting Baum on her first day of high school three years ago. She was hooked by his talk and signed up for the afterschool program. She also participated in HRCS’s summer internship programs, and now she gets paid to work there. “It’s like a second family for me,” Jones says. “And I just love getting out on the boat in the fall, when you can watch the sunset from the water.”

Sailors have two options when they leave Pier 66. Both directions provide unparalleled views of Manhattan. If you head south toward the Verrazano-Narrows Bridge, there’s Frank Gehry’s cubist delight on 18th Street, the soaring Freedom Tower, and the Statue of Liberty.

On a late-afternoon sail north, tourists from France, Lebanon, and Germany sailed in view of the Durst Organization’s 43-story tetrahedron at 57th Street, the Trump towers in the West 60s, and the green belt that wraps the shore north of 72nd Street. On the way back to Pier 66, the team took turns at the tiller, trimmed the sails, cranked the sheets to the foresail, and hung tight when the boat heeled in a gust. Then they motored in to the mooring and took down the sails, just as the sun slipped beneath the horizon over Weehawken, New Jersey.

The Fordham connection runs deep at HRCS. Along with Baum and Burke, Arthur Burns, LAW ’69, chairs the nonprofit’s board of directors, which includes Lauren Sheridan, GABELLI ’98, a senior manager at Deloitte. She was recruited to the board two years ago by Burke after she attended HRCS’s annual Sailing for Scholars benefit. Recent Fordham graduate Olin Paine, FCRH ’16, a California native, parlayed his sailing skills into part-time work, teaching in the group’s adult sailing school.

Burns says that the sport, which he discovered 25 years ago, creates opportunities to inspire teens while teaching them social skills that they’ll need in life. Sailing along the Hudson River also provides an exhilarating recreational pursuit for adults who yearn to feel the power of the wind and observe Manhattan from an entirely new viewpoint.

Though it’s viewed as an elite sport, Burns says sailing can be a great equalizer. “It doesn’t matter who you are, what you look like—the social labels all get washed away when you get onboard, and you are working toward the same goal,” he says. “There’s nothing else but to get along, talk, and work together. It can be so calm and quiet, and the next thing you know, all hell is breaking loose. You need to always be on your toes, even when you are relaxing. It’s a great life lesson to learn.”

—David McKay Wilson is a columnist for The Journal News and a frequent contributor to this magazine.