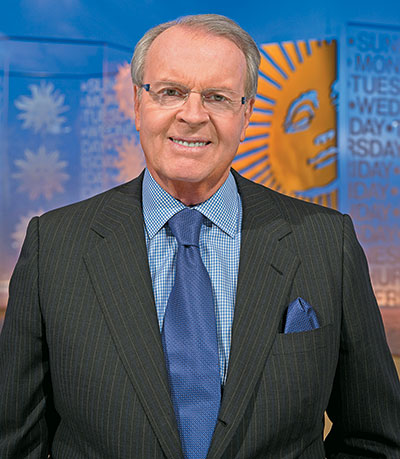 The National Academy of Television Arts & Sciences honored Osgood for his lasting contributions to broadcast journalism during his almost-50-year career, including his “gifted writing and mastery of the craft of the television news story; his unique humor and musical gifts; and his innate ability to engage his audience with warmth and credibility.”

Osgood retired last year as host of CBS Sunday Morning after 22 years with the Emmy-winning show. He continues to host The Osgood File, heard on radio stations across the nation. Osgood sometimes delivers the short-form daily radio show in verse, helping to earn him the title of “poet in residence” at CBS News.

Bob Mauro, president and CEO of the National Academy of Television Arts and Sciences, recalled working in the newsroom when Osgood was hosting the CBS Evening Weekend News: “He had the understated ease of a Southern gentleman even though he came from New York and possessed perhaps one of the greatest voices to have ever graced network television. Osgood’s character put you at ease, while his wit and humanity drew you in whether reflecting on stories large or small.”

When he retired from Sunday Morning, Osgood, 84, said people had been asking why he stayed with the show so long beyond traditional retirement age.

“It’s just that it’s been a joy doing it!” he responded. “Who wouldn’t want to be the one who gets to introduce these terrific storytellers and the producers and writers and others who put this wonderful show together?”

He once said of the features-focused show: “We accentuate the positive and don’t try to shock. .. I think there’s a growing appetite for that. We’re surrounded by shock.”

Osgood got his start at WFUV, Fordham’s public media station, which honored him in 2008 by establishing the Charles Osgood Award for Excellence in Broadcast Journalism.