skip to main content
Return to Fordham University
You are at:Home»Fordham Magazine»Catching Up with New York Knicks Legend Dick Barnett
Above: Former New York Knicks star Dick Barnett recently met with young student-athletes as part of Signature Bank’s Scholars Program
Dick Barnett won two NBA championships with the Knicks as a guard with swagger and an unconventional jump shot, and later had his No. 12 raised to the Madison Square Garden rafters. But after his playing days ended, he embarked on a new career, earning a doctorate in education from Fordham in 1991 and later spending four years as a professor of sports management at St. John’s University.

Today, Barnett, 81, speaks regularly to children about the importance of education and, in his words, “the limitless dimensions of human possibilities.” He spoke with FORDHAM magazine from Tampa, Florida, where he was in town for a series of speaking engagements. 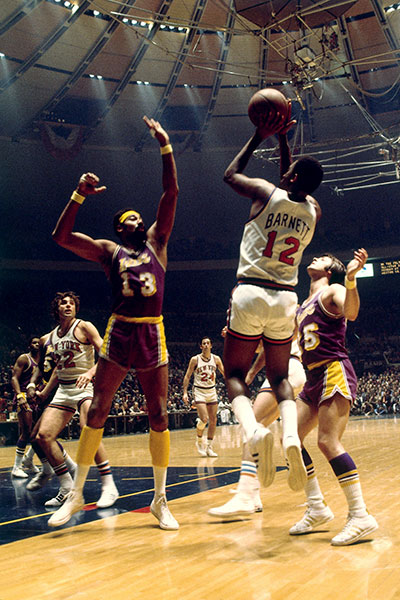 “Fall Back, Baby!” Dick Barnett would often call out as he launched his signature jump shot. Here he goes up against the Los Angeles Lakers’ Wilt Chamberlain in a 1972 game at Madison Square Garden. Barnett helped lead the Knicks to two NBA championships, beating the Lakers twice, in 1970 and 1973. (Photo by Dick Raphael/NBAE via Getty Images)

You’ve spoken before about how injuring your Achilles tendon while with the Knicks was a key moment in your life. You eventually returned to the court, but how did that set in motion what you did when you finished your playing career?
That was a transformative moment in my life and gave me the reality that someday I’d better get prepared for the future which I, as a younger man, wasn’t focused upon. That put me on the path to education and really helped turn my dream into an adventure. I wanted to get my doctorate and go to the highest point that I possibly could. Very few professional athletes have really gone down that road. I thought it would open doors that perhaps were not open before.

I was reading a quote from Chris Mullin, now the St. John’s coach, and he was saying that with those Knicks teams in the late ’60s and early ’70s, their motto was to hit the open man, and it was all about unselfish play. Was there a lesson from that team that stuck with you in your career beyond basketball?
You’ve got to be able to adapt. And then going even further, to be able to not only adapt but to be able to get along with people. You make whatever adjustments that are necessary to function in a multicultural society. All of that is related to what we accomplished playing basketball with the New York Knicks. And one of the very fortunate things is that those kind of relationships that were established on the court have lasted a lifetime.

The Knicks haven’t had much to celebrate over the last 20 years or so. Is it frustrating as somebody who played on the franchise’s championship teams to look at how they’ve struggled to get back to anything like that?
Yeah, it’s kind of frustrating to see that that legacy has not been carried on the way we left it. And unfortunately, they haven’t been able to put the pieces together to reestablish what was left with those championship teams. Obviously they continue to work. I assume they felt very good when they brought Phil Jackson in, who was part of that championship pedigree, and obviously it didn’t work out, but they continue to try to find the formula that was successful when we were there. 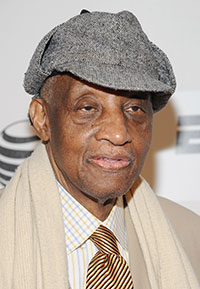 Barnett at a 2014 screening of the ESPN film “When the Garden Was Eden.” (Photo by Gary Gershoff/WireImage)

There’s a fair number of high-profile NBA players today who speak out on topics of social justice. Are there players you especially respect for that kind of work that they do off the court?
NBA players have probably taken a more interested position in that regard. In previous generations, their jobs were in jeopardy. And now because of social media and generational will, the whole circumstance has changed. They can speak out without their jobs being in jeopardy. LeBron James, [Chris] Paul, even Melo [Carmelo Anthony], and a whole bunch of folks, they are more visible than the players in the NFL and Major League Baseball, and so probably they’re more instrumental in terms of awareness of social justice than other professional sports are.

Once you leave the sports arena, you have to join the population of America, and particularly in certain circumstances you’re just as vulnerable as other parts of the population, without your sheath of protection of being a professional athlete.

I understand that you’re traveling to Cuba this summer for a clinic. How did that come about?
It’s not only a clinic, but it’s a humanitarian effort to talk to young people about some of the same issues that are confronted in America, in terms of their dreams and education and economic circumstances, and trying to provide a better life. It’s something I’m very excited about. Talking about America, Dr. [Martin Luther] King [Jr.] said a long time ago that to live one’s dream, you’ve got to reach down into the inner chambers of your own soul individually and find with the ink and pen of self-assertiveness your own man or womanhood, and sign your own Emancipation Proclamation to live your dream. And that has been always a guiding light in my life and the message that I’ve taken forward to talk to young people.