skip to main content
Return to Fordham University
You are at:Home»Fordham Magazine»Catching Up with Former News Anchor Patti Ann Browne
Story by Claire Curry | Photo courtesy of Patti Ann Browne
Throughout her three-decade career as a broadcast journalist, Patti Ann Browne, FCRH ’87, covered countless breaking news events, including the 1993 Long Island Rail Road shooting, the crash of TWA Flight 800, the 2000 Elián González raid, and the 2017 attack on London Bridge. In her new memoir, Write Your Own Story: How I Took Control by Letting Go, due out in April from Post Hill Press, she reflects on her life on and off camera and reveals why she decided to leave her career in 2018 to begin a new chapter.

Browne credits her college years at Fordham for laying the foundations for a resume that includes high-profile reporting and anchoring positions at News 12 Long Island, MSNBC, and Fox News. As a communications major, she began developing her journalistic chops working at WFUV (90.7 FM, wfuv.org), Fordham’s radio station. That experience sparked a passion for broadcast news, although she joined the station in her first year with a different goal in mind: She wanted to host Ceol na nGael, the station’s popular Irish music program.

“I became involved in the news department because it was a requirement if I wanted to be on the Irish show,” she said. “My parents would always listen to the show when I was growing up. But I had to work my way up to that. WFUV said, ‘Write some newscasts, eventually anchor the news. Then you can be a gopher on the Irish show.’”

A Training Ground for Success

Browne spent most of her free time in the studios, then located on the third floor of Keating Hall, where she wrote and presented short news updates and eventually anchored the half-hour Evening Report. By the time she reached her junior year, Browne had risen to WFUV news director and was assigned to co-host the Irish show with Kathleen Biggins, FCRH ’87, GSE ’91, who is now a longtime CBS News writer and still a host on WFUV. Browne praised her former classmate for being a supportive mentor and “extremely well-versed in Irish music and culture.”

“WFUV is a 50,000-watt radio station. That is the same size as commercial stations in the tristate area,” Browne said. “It is taken very seriously, and the training was rigorous. I’m glad I got to make my mistakes there and learn a lot.” During her years at Fordham, Browne also worked part time at Newsweek and served as editor of a Fordham literary magazine called Alternative Motifs.

After graduating, Browne worked as a morning news anchor at Long Island’s WLIM Radio. She later earned a master’s degree in communication arts at New York Institute of Technology, where she taught undergraduate news writing and served as a reporter on NYIT’s evening cable news show.

Following a stint as Michigan bureau chief on WSJV-TV in South Bend, Indiana, Browne returned to New York to work at News 12 Long Island. She was then an anchor at MSNBC for three years and spent 17 years at Fox News. Her reporting earned her an Associated Press Regional Award for a documentary feature, a FOLIO Award, and the Dennis Puleston Award for Environmental Achievement. She was also named one of the top 30 in Irish American Media by The Irish Voice. And in 2012, she was inducted into the Hall of Fame for the Roman Catholic Diocese of Brooklyn, which includes Queens, where she grew up.

‘Living with Integrity and Working Hard’

Browne’s retirement was something she foresaw from the beginning of her career. “When I was in my 20s, I said, ‘I’m not going to do this forever. Probably when I hit 50, I’m going to stop because it’s a difficult job.’ You’re not working nine to five. You’re working weekends, holidays, early mornings, late nights, overnights. It’s very difficult to be present for your family.”

Family has always been important to Browne, who has two sisters, including a twin. She is grateful to her parents for instilling in her and her siblings faith, gratitude, and a solid work ethic. “They set a really good example for how to be successful in life by living with integrity and working hard,” she said. 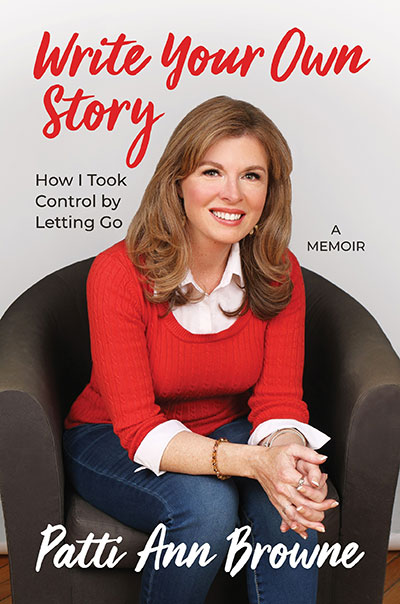 While she was living in New York City, Browne met her husband, Mike, at Holy Trinity Church on the Upper West Side, where they eventually married. The couple has a son, Connor, who was born 11 weeks premature, weighing just over two pounds. In her book, she describes how motherhood—and Connor’s early and challenging start to life—instantly shifted her priorities.

Over the years, Browne has remained connected to her alma mater. She is a member of the Fordham Alumni Chapter of Long Island and has participated in fundraising efforts and career seminars at WFUV. In 2016, she moderated a forum about Pope Francis prior to his New York visit.

Her Fordham roots also grew deeper with her marriage. “I ended up marrying a guy whose parents went to Fordham and actually met at Fordham, so we have Rams on both sides of the family,” said Browne, who fondly recalled many tailgate parties and said she’s looking forward to celebrating her upcoming 35th Jubilee in June.

Browne’s son, Connor, is now a college-bound high school student who runs track, plays the tuba, and is a soon-to-be Eagle Scout. She is grateful to have more time to spend with him and her husband camping and enjoying the outdoors and volunteering at their church in Nassau County. She also does freelance voice-over work and has devoted the past year to writing her book. In addition to recounting the perks and challenges of her career, Browne writes about growing up in Queens, her years at Fordham, and her decision to walk away from the spotlight to focus more on faith and family. The message she hopes to send readers is that it’s possible to “take control of your own destiny and write your own story.”

What are you most passionate about?
Motherhood. Twenty years ago, I would’ve said “my career,” but priorities shift. My son is my pride and joy.

What’s the best piece of advice you’ve ever received?
There’s a famous quote by author and motivational speaker J. Richard Lessor that I have found to be true throughout my life: “Happiness is like a butterfly: the more you chase it, the more it will elude you, but if you turn your attention to other things, it will come and sit softly on your shoulder.”

Name a book that has had a lasting influence on you.
Mere Christianity by C. S. Lewis. It makes the case that faith and logic are not incompatible.

Who is the Fordham grad or professor you admire most?
I had some excellent professors, but I think Fordham’s former president Joseph A. O’Hare, S.J., might be the person I admire most. A Bronx native, son of a cop and a teacher, he was inspired to become a priest by watching Jesuits fight corruption in the 1940s. He was an open-minded man of intelligence, integrity, honesty, and civility. He was influential not just on campus but in the world beyond, as editor-in-chief of America magazine and founding chair of New York City’s Campaign Finance Board. More personally, he was accessible to Fordham’s students. I was fortunate to spend some time with him over my four years at Fordham. In addition to the qualities I already mentioned, he also had a great sense of humor. He was witty and a great storyteller. He left his mark on Fordham and the world.

What are you optimistic about?
The future of faith in America. The trend in the U.S. has been toward secularization, but I believe the pendulum will start to swing back toward God as people figure out the current path isn’t working.