skip to main content
Return to Fordham University
You are at:Home»Fordham Magazine»Catching Up with Arizona Cardinals Running Back Chase Edmonds Ahead of an Uncertain NFL Season
Photo courtesy of the Arizona Cardinals
It was never going to be a typical offseason for Chase Edmonds. The 2018 Fordham College at Rose Hill graduate and current running back for the NFL’s Arizona Cardinals had been rehabbing a hamstring injury he suffered toward the end of the 2019 season when COVID-19 upended any plans for a return to normal training.

“I think it really hit us when the NBA got canceled,” Edmonds says of the moment on March 11 when the NBA suspended its season amid the pandemic, and he—and the rest of the NFL—realized everything would change for them, as well.

After spending most of February and the beginning of March in his hometown of Harrisburg, Pennsylvania, Edmonds said goodbye to his 5-year-old daughter, Avery, and left for Arizona to prepare for the uncertain months ahead. Since then, he, his coaches, and his teammates have been adapting to a new kind of football training, one filled with individual workouts and virtual meetings. Organized team activities were canceled in late May, and Edmonds and his closest friend on the team, Christian Kirk, decided to rent a house in Los Angeles for about a month to get a change of scenery.

Now, back in Arizona for training camp, which was allowed to open on July 28, Edmonds and the rest of the Cardinals have finally been able to access the team’s facilities—albeit with a rigorous set of safety protocols that includes frequent deep cleanings of equipment, smartwatches that monitor players’ health and their proximity to others, and strict rules around gatherings.

“It’s just nice to be back, man,” Edmonds says. “Seeing the guys and interacting with each other, because really, everyone has just been kind of doing their own thing. It felt like an eternity.”

Preparing for an NFL Season During COVID-19

As relieved as he is to get back to some semblance of normalcy with his team, Edmonds knows that the upcoming season, scheduled to begin on September 10, is far from certain.

“I would say the players, we’re probably the least optimistic just because we keep it real,” he says. “I mean, you’re touching people every single play, it’s a contact, collision sport. So there’s not really social distancing going on in the game of football. But the coaches and the GMs, they’re probably more optimistic than the players.”

If the season proceeds as planned, the playing environments will be unlike those Edmonds has grown accustomed to in the NFL, like when he ran for three touchdowns in front of 70,000 fans at MetLife Stadium in New Jersey last October, leading the Cardinals to victory against the New York Giants.­ While the NFL will allow each team to determine its own rules for fans in stadiums based on local restrictions and guidelines, the league is preparing for a sharp decrease in the number of spectators. 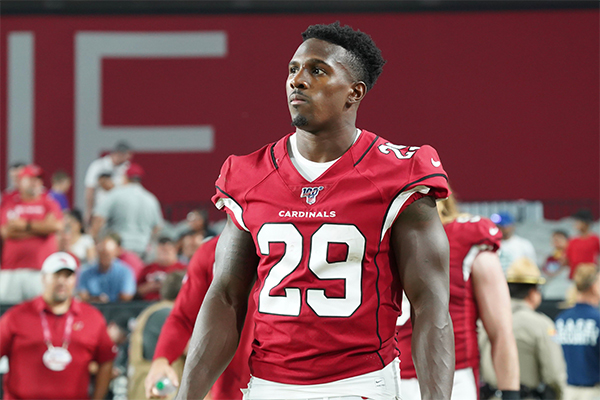 “I think it’s definitely going to be a unique environment just because the fans make the atmosphere,” Edmonds says. “It’s electrifying, man, [when]you’ve got 70,000, 80,000 people watching you and screaming. [This season], it’s probably going to feel like high school ball for a lot of guys.”

Edmonds’ own high school football career at Harrisburg’s Central Dauphin High School was successful, but he was underrecruited because of his size—at 5-foot-9, he is relatively short for a college football prospect. Fordham’s offensive coordinator at the time, Andrew Breiner, had a connection at Central Dauphin, though: his own high school coach, Bob “Gump” May, was working with the team and tipped him off to Edmonds as a special talent. With several offers in hand, Edmonds ultimately chose Fordham, he says, because of the coaching—the head coach at the time, Joe Moorhead, FCRH ’96, had led the team to great improvement after being hired in 2011—and low roster turnover that would greet him in his first year. Once at Rose Hill, he proceeded to embark on a historic college football career.

Over his four seasons for the Rams, he scored 74 touchdowns and rushed for 5,862 yards, the fifth most in NCAA Football Championship Subdivision history, a number that would have been even higher if it weren’t for an injury that caused him to miss three games his senior year. That dominance made him a fourth-round pick in the 2018 NFL Draft, where the Cardinals were drawn to his speed, strength, and focus. Over his first two seasons with Arizona, Edmonds has rushed for 511 yards and six touchdowns, and is part of an exciting young core under head coach Kliff Kingsbury, who came to the Cardinals in 2019 after six years leading high-powered offenses at Texas Tech University. In addition to the exciting brand of football in Arizona, Edmonds has been won over by the area itself.

“Oh, I love Arizona,” he says. “I mean, outside of the brutal two, three months in the summer, it’s beautiful: 80 degrees and it’s just absolutely amazing. It’s a little more laid back than the East Coast.”

Edmonds still maintains his roots, though, both in Harrisburg and with Fordham. He has joint custody of his daughter, and before COVID-19, she visited him there frequently. Now, with the risk of travel and her getting ready to start kindergarten in Pennsylvania, he instead has daily video chats with her and looks forward to being able to see her in person regularly once the season is over.

His connections to Fordham remain strong, from the close friends he made at the University to his lasting relationship with his former coaches, including Shane Fogarty, the Rams’ current special teams/safeties coach. He also recently spoke with former Fordham softball player Maria Trivelpiece, FCRH ’19, for the Fordham athletics YouTube segment Catching Up with the RAMily. During that conversation, Edmonds addressed systemic racism and police shootings of Black Americans, telling Trivelpiece, “What we feel as Black athletes is that, all lives matter, but right now, they don’t, because Black lives don’t matter, and if you’re blind enough to not realize that systematic injustice is going on, then you are part of the problem.” 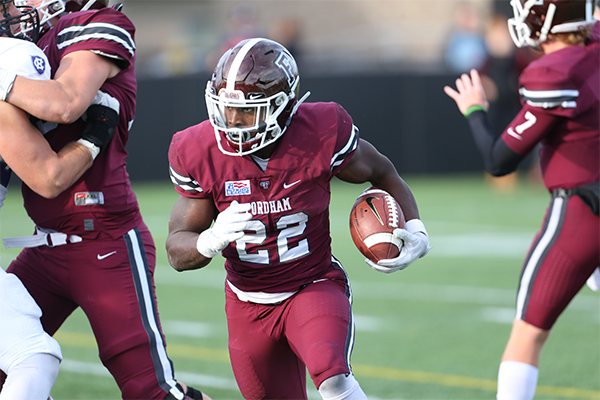 Looking ahead, Edmonds will try to pick up where he left off before his hamstring injury and make a big impact as the second running back on the Cardinals’ depth chart behind Kenyan Drake, who was traded to the team in October 2019.

“I know what I can do,” he says. “I know what I’m capable of. I think I’ve put that on film when I’m healthy. So I’ve just got to go out there, make my plays, and when my number’s called, do what I do. That’s my play.”

What are you most passionate about?
Right now, it’s got to be football. To work your tail off your whole life for something, especially when you’re doubted, it’s a proud feeling. I’m not usually proud of myself for a lot of things, but then I was drafted into the NFL, and just finally being able to [achieve]my dreams … it’s a proud feeling, and it makes me even want to work harder. And just to put it down for the little guy, for guys that don’t get the recognition they think they deserve, for the guys that always kind of doubted, I kind of take pride in that. I put that chip on my shoulder. I don’t just take this as my job. I love this game. It brings me so much joy. The people I’ve met and the experiences that I’ve been able to already live through … it’s just taught me so much about life.

What’s the best piece of advice you’ve ever received?
Two things. One is from my guy Chandler Jones [outside linebacker for the Cardinals]. He told me that you don’t need an explanation as to why you’re telling somebody “no.” And that really stuck with me, just because when I first got to the league and I had a lot of people asking me for money, I think it was hard just to say “no” to certain people. And if I did say “no,” I would try to find a reason, so it didn’t seem like I was being so harsh. But Chandler really taught me that no, you don’t need to explain to somebody why you’re saying “no.” That’s your business.

And then, this is one that’s from my big bro, [Cardinals wide receiver] Larry Fitzgerald. Larry always used to tell us, “No matter how you cut the sandwich, the bread always comes first.” That really hit me. Think with your head, make sure you’re doing things right. And make sure you’re setting yourself up correctly financially.

What’s your favorite place in New York City? What’s your favorite place in the world?
In New York, Maloney & Porcelli. They had this deal where you could get a steak, an appetizer, and all-you-can-drink wine for $80. I went there for my 22nd birthday. It wasn’t too expensive for a college kid, because obviously we couldn’t afford the high end-restaurants and everything like that.

In the world, if we’re talking about a city, I’m going to say Miami. I love Miami. I love the vibes there. At Fordham, every spring break we’d go there. And if I’m just going for any place, it’s my game room. I’m a daytime streamer on Twitch. I love streaming Call of Duty. In the offseason, I can’t count the endless hours I’ll spend on that game.

Name a book that has had a lasting influence on you.
Always the Bible. I grew up really just implementing faith and religion, and that’s gotten me through trials and tribulations that I’ve had in my life. The Bible really got me through my senior year at Fordham, just because that was really a low point for me because I was injured. I really couldn’t play, and I felt like my whole world was crashing. And being able to grasp my faith, and the understanding of how things happen for us, not to us … I thought having my [draft]stock fall was going to be the worst thing that ever happened to me, but it just so happened that my mom was planning to move out to Arizona to get closer to my sister who already lived there. And I got drafted here two months after she decided that. So it was just kind of a blessing in disguise, and that’s why I really just rely on the Bible ever since that.

Who’s the Fordham grad or professor that you admire the most?
Probably Judge Robert Holdman [FCRH ’86, LAW ’91]. As I’ve gotten older and as I’ve matured more as a man, Judge has helped me out a lot more than he ever had to. He helped me out when I was at Fordham with my agent process. He would interview agents for me, give me a background on whether they were legit or not. Just because my feet were kind of wet. I didn’t know what was going on in that world. He helped me out with another connection, another Fordham graduate who helped me with finance. Anytime you ever need Judge to help you out with something, he would do his best to truly help you out. That’s a guy that I truly do admire.