skip to main content
Return to Fordham University
You are at:Home»Fordham Magazine»Catching Up with Actor and Nonprofit Leader Kristin Guerin on the Eve of Her 10th Fordham Reunion
Story by Kim Catley | Photos courtesy of Kristin Guerin
As a Fordham student, Kristin Guerin was on a path to work in human rights. She majored in theology and took courses in peace and justice studies, interned with Amnesty International, and secured a placement with the Jesuit Volunteer Corps.

But during her senior year at Fordham College at Rose Hill, she auditioned—secretly and on a whim—for an off-Broadway play. She landed the role and spent her final semester at Fordham juggling her coursework, internship, and performances, wondering which direction she would choose.

“I turned down the Jesuit Volunteer Corps and decided to pursue an acting career,” said the 2012 Fordham grad who is looking forward to attending her 10th Fordham reunion at Jubilee weekend in June. “But I made a promise to myself to find storytelling and theater work that fostered social justice and created change in the world.”

Returning to Her Roots

At first, Guerin kept that promise—a commitment she said is rooted in her experience at Fordham.

“I chose Fordham because of its focus on being men and women for others,” she said. “There was space to ask questions about the state of the world and foster a desire for justice.”

She wrote, directed, and produced social justice-oriented theater, and acted in productions spotlighting marginalized communities. Gradually, though, she said in a recent Magis Minute video, she began taking “more and more jobs that supported my ego rather than my community.” Then, in March 2020, the bottom dropped out. She was in Miami, performing in a new musical based on the 1989 movie The Cook, the Thief, His Wife & Her Lover, when theaters were shuttered and film productions were canceled. 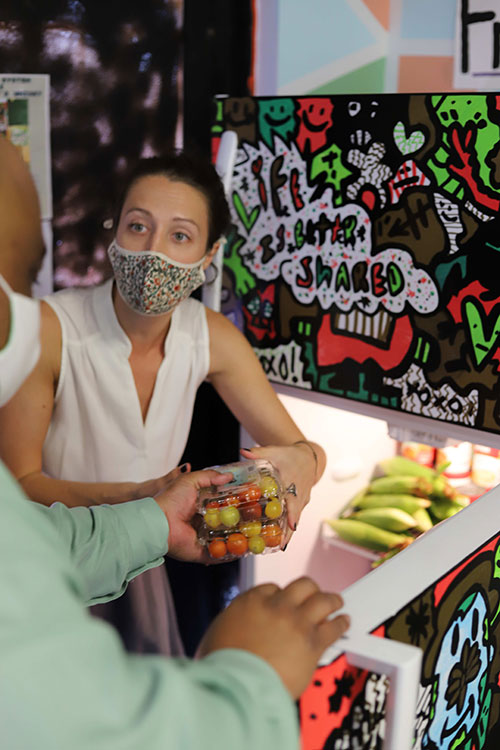 Guerin is the co-founder and CEO of the Miami food insecurity nonprofit Buddy System MIA.

With time on her hands, Guerin partnered with a friend on a community organizing campaign to address food insecurity in Miami. That campaign became a nonprofit, Buddy System MIA, which Guerin now leads as CEO. She also co-founded North Wind Collective, a storytelling and production company that aims to uplift marginalized voices, sometimes in conjunction with Buddy System.

Guerin said her experience as a member of the Fordham Experimental Theatre and Mimes and Mummers student clubs—where she learned about all aspects of storytelling, from writing to directing to acting—laid the groundwork for her new trajectory.

“There’s so much creative fulfillment and autonomy in saying, ‘This is how we want to tell a story,’” she said. “It’s something I’ve carried with me to Buddy System, where I have my hands in everything, and as a producer.”

As an undergrad, Guerin witnessed and was a student worker at the annual Jubilee celebration at Rose Hill. She attended the Saturday evening gala at Jubilee five years ago, but this year’s festivities—to be held from June 3 to 5—will be her first chance to experience the full Jubilee weekend, and she’s looking forward to it. Guerin and her classmates have been texting for weeks, she said, looking to recreate their Campbell Hall experience from senior year.

“I’m really excited to see folks from all walks of life—where they’ve gone and who they’ve become over the last decade,” she said. “And I can’t wait to step back into the magic of Fordham for a weekend.”

What are you most passionate about?
Creating things that foster empathy and bring about social change: art, theater, film, social programming, community organizing platforms, and now nonprofits.

What’s the best piece of advice you’ve ever received?
Reframing my perspective to see things that scare me as challenges. I love challenges! Now, every time I have to do something that intimidates me—which is pretty much every day—I see it as an opportunity for growth rather than something to fear.

What’s your favorite place in New York City? In the world?
In NYC, Marie’s Crisis in Greenwich Village. But a close second would be Yankee Stadium. In the world, Walt Disney World—of course—or sunrise on North Beach in Miami with a cafecito in hand.

Name a book that has had a lasting influence on you, and tell us why.
Brené Brown’s Daring Greatly started me on a deep healing journey to living a more vulnerable, open-hearted life, and I’m forever grateful.

Who is the Fordham grad or professor you admire most?
I’d have to go with my classmate and dear friend Stephanie Pennacchia. She’s always been one of the most capable, patient, hardworking, empathetic, and open-hearted people I know. And to watch her grow over the last 14 years to deeply honor her own experience of life has been an inspiration.

What are you optimistic about?
I’m pretty optimistic in general. I believe true change happens one step at a time and there’s always a lot of backlash as we get closer to making lasting change in the world. I actually think we’re closer than we’ve ever been to true peace and justice in our country and world.

After virtual gatherings in 2020 and 2021, Jubilee 2022 will be held in person on the Rose Hill campus from June 3 to 5. The alumni relations office anticipates welcoming its largest group of Jubilarians ever. Learn more and register today.