skip to main content
Return to Fordham University
You are at:Home»Fordham Magazine»Carol Robles-Román: Advocate for Women and Girls
Above: Carol Robles-Román, president and CEO of Legal Momentum, is a 2015 Ford Public Voices Fellow, one of 21 social-justice leaders supported by the Ford Foundation in an effort to “dramatically increase the public impact of our nation’s top underrepresented thinkers.”
Photo by Laura Barisonzi

It’s only fitting that Wonder Woman, Princess Leia, and other powerful female characters would form a welcoming committee in the office of Carol Robles-Román, FCLC ’83. The president and CEO of Legal Momentum has been fighting for society’s most vulnerable for years.

After only 18 months at the helm, Robles-Román and her team have added to Legal Momentum’s accomplishments. The nonprofit, launched in 1970 by the National Organization for Women to advocate for women’s civil rights, recently won pregnancy accommodations for all New York City employees. It also joined forces with New York Gov. Andrew Cuomo, FCRH ’79, on the “Enough Is Enough” bill signed into law last summer to combat sexual assault on college campuses.

These headline-generating achievements are the latest results in a career spent recognizing problems and then finding the political will and the means to fix them.

“Part of my ethos is being a disruptor, in a good, nice way,” says Robles-Román, who served as deputy mayor for legal affairs and counsel to Mayor Michael Bloomberg for 12 years before leading Legal Momentum. “It’s about creating strategic partnerships to make change happen.”

Crusading for social justice comes naturally to Robles-Román, the daughter of Puerto Rican migrants who moved to the New York area in 1956, raising her and her five siblings in Brooklyn and Queens. She remembers watching her mother, Ines, transform the family’s travel agency into an informal legal services outfit, assisting neighbors in battles with bureaucracy, whether the problem was translating a form from English to Spanish or getting a child enrolled at public school. “She was a lawyer without a law degree,” Robles-Román says of her mother, who died in 2012.

The first time Robles-Román began looking for solutions to complex social justice issues was during her senior year at Fordham. She was dating a fellow Fordham student who would later become her husband, the Hon. Nelson S. Román, FCRH ’84. At the time, he was a police officer in the Bronx and had told her some harrowing stories about responding to domestic disputes. Her interest piqued, she did some research into best practices for handling domestic violence calls, publishing her work in Fordham’s pre-law journal. “Ever since then, domestic violence and the treatment of women has been an issue that she’s held very close to her soul,” says Román, who is now a federal judge in the Southern District of New York.

“Women of strength, that’s what Legal Momentum stands for,” says the Hon. Judith Kaye, former chief judge of the State of New York. “They couldn’t have a better representative than Carol.”
Both she and Román aspired to the legal profession as undergraduates but couldn’t afford to go to law school right away. He continued to work for the NYPD while she became a paralegal. To figure out their paths, they joined the Puerto Rican Legal Defense and Education Fund, where they took LSAT classes and attended networking events. Their hard work paid off. Both finished law school, with Robles-Román earning a JD from NYU in 1989.

While good grades and test scores are important, networking is just as critical, says Robles-Román, who counts U.S. Supreme Court Associate Justice Sonia Sotomayor among her mentors and role models. She met Sotomayor, a Bronx native, through the Puerto Rican Bar Association in the mid-’90s. “When I’m in a heated negotiation trying to get that extra $3 million for [a] project and nobody else in the room is advocating for it, I try to channel her,” Robles-Román says. 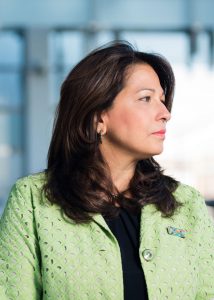 Like Sotomayor, Robles-Román is generous with her time when it comes to mentoring young people. Though she has a high-profile job and is the mother of a 17-year-old girl and a 10-year-old boy, she still carves out time to help the next generation. Four years ago, she created what she calls her “Girl Power School” talk, which she presents primarily to teens. She focuses on the steps that lead from the classroom into a profession, like writing a resume, getting letters of recommendation, and finding mentors. “Don’t be shy,” she often tells young women. “Do. Not. Be. Shy.”

Robles-Román has never been shy about pursuing initiatives to help the city’s most vulnerable citizens. In late 2001, after overseeing large operations at the New York state court system, she was tapped by Mayor Bloomberg’s transition team to lead legal affairs. The first woman to serve as counsel to a New York City mayor, Robles-Román thrived in the hard-charging Bloomberg administration.

She was a force behind the city’s language translation policy and the multimedia “Let’s Call an End to Human Trafficking” campaign. The accomplishment in which she takes the most pride is the creation of four Family Justice Centers, where victims of domestic violence have access to law enforcement and other social services under one roof.

The opening of the first Family Justice Center in Brooklyn 10 years ago was prompted by city data that found nearly three-fourths of women killed in family-related homicides hadn’t made a prior domestic violence report to the police. The goal is to make the process less frustrating and overwhelming by providing comprehensive services in one location. A 2014 report by the city’s Fatality Review Committee showed that family-related homicides dropped 36 percent since the center opened, and 57 percent of the victims had contact with at least one city agency.

As the end of Mayor Bloomberg’s third term loomed, Robles-Román began thinking about her next act. When she learned that Legal Momentum—which tackles a wide range of gender issues, from violence against women to workplace equity to poverty—was looking for a new CEO, it seemed like the perfect fit. The Hon. Judith Kaye, former chief judge of the State of New York, agrees. “Women of strength, that’s what Legal Momentum stands for,” she says. “They couldn’t have a better representative than Carol.”

Robles-Román aims to build on Legal Momentum’s recent victories. She’s determined to see the “Enough Is Enough” legislation—which requires affirmative assent before students engage in sexual activity—spread to the other 49 states. And she’s looking to build on the pregnancy accommodations victory, won as a result of a discrimination case brought by pregnant New York City police officer Akema Thompson. With support from Legal Momentum, Thompson sued the city after she was denied a chance to take a makeup promotional exam, despite the fact that the exam day coincided with her due date. Thompson will get to take the test—and she won the right to reasonable pregnancy accommodations for all city employees.

As she spoke about the courage Thompson showed in challenging the city, Robles-Román glanced over at Wonder Woman and Princess Leia and had a thought: “I’m going get one of these made in the shape of Officer Thompson!” she said, with an eye toward growing her collection of gender justice warriors.

—Mariko Thompson Beck is a freelance writer based in New York City.