skip to main content
Return to Fordham University
You are at:Home»Fordham Magazine»Features»Calderón’s Two Dreams: Worthy Rulers and Earthly Stewards
Above: Erika Iverson as Horn and Ashley Setzler as Rosaura in a preview of Calderón’s Two Dreams, a production spearheaded by Father Drance, Magis Theatre Company’s artistic director and artist-in-residence at Fordham
Photo by Timothee ElijahLa vida es sueño is often called the Spanish Hamlet. But few know that a very different second version of the 17th-century play exists.

In the upcoming Calderón’s Two Dreams, the Magis Theatre Company will perform both versions of Pedro Calderón de la Barca’s famous play. Opening night of the production’s limited run at LaMaMa next month is already sold out.

In the better-known version, written in 1635, a woman named Rosaura travels to a foreign kingdom to defend her honor, where she becomes entangled in a conflict between King Basilio and Prince Segismundo, the son he has kept locked in a tower since birth because of a prophecy that claimed he would be an evil ruler. 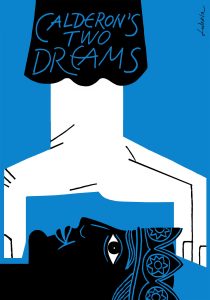 The poster for Calderon’s Two Dreams by Luba Lukova

Like Hamlet, this first version examines questions of freedom and choice in a confusing reality. But in the 1677 edition, the setting moves from a foreign kingdom to the court of the universe. The original play asks, can this prince be a worthy ruler? The later version wonders, are humans fitting caretakers of the universe?

During a preview of the production at the Sheen Center last December, Michael Zampelli, S.J., GSAS ’86, this year’s Loyola Chair in Theology at Fordham, explained that this shift seems appropriate for a Jesuit-educated man who started his life as a soldier but ended it as a priest.

“Calderón lived quite a life of contrast himself, as a soldier but with this grand interest in theology and philosophy and all of the ultimate questions,” Father Zampelli said. “There’s this great interest in exploring human nature but also giving vent to the more passionate side
[in the first version]. What we get [in the second version]is a sense of the fragility of human life.”

Participating in this dual production has been an actual dream for Dennis Vargas, FCLC ’88, who plays King Basilio (and his parallel character, Power, in the second version). Vargas has been interested in the play since his student days at Fordham, and in 2008 he had the opportunity to do the simultaneous translation for New York City’s Repertorio Español production of the 1635 version. But this is his first time performing the piece on stage. “I’m too old now to play Segismundo,” he said, “but to be able to play Basilio is amazing, like getting to play Claudius or Prospero.”

Vargas said he didn’t know there was a 1677 version of the play until he auditioned for the company. “These are two versions of the same play, written about 40 years apart, and seeing them together you can understand how Calderón saw his life when he was a young man and compare it to how he saw life when he was older,” Vargas explained. 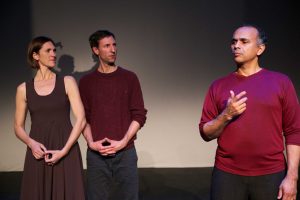 Dennis Vargas, FCLC ’88, as Basilio (right) with Margi Douglas as Estrella and Joe McGranaghan as Astolfo in the preview of Calderón’s Two Dreams last December

Beyond the excitement of finally performing the piece, Vargas was thrilled by the unique opportunity to help with the translation. George Drance, S.J., an artist in residence at Fordham and Magis’ artistic director, collaborated with Alfredo Galván to translate the 1677 edition, which had never before been translated into English. Early on in the two years the company spent working on the production, they also decided to create a new English translation of the 1635 edition.

“Crazy company that we are,” said Father Drance, “I asked the actors what they felt were the most important lines of their scenes. We looked at all sorts of existing translations, and we created our own from there.”

In another first, Magis will be performing both versions back-to-back during the run, a unique opportunity for the group, which, according to Drance, is known as “the theater company that takes on challenges that other people are afraid of.” It’s a philosophy that Vargas says “brought me back to being at Fordham in a way that I hadn’t been in 25 years, to really feeling things.”

Based on the creative preview seen at the Sheen Center event, Magis’ final production is sure to be a dream come true for theater fans.

Calderon’s Two Dreams will run from February 9­ through February 26 at the Ellen Stewart Theatre in New York City.