skip to main content
Return to Fordham University
You are at:Home»Fordham Magazine»Bronx Tales: Personal Memoirs Document the Diverse Cultural Impact of the City’s Northernmost Borough
Back When: Fordham alumni (from left) Michael Brescia, Mary Higgins Clark, Michael Kay, and Renee Hernandez reflect on how their Bronx childhoods colored who they are today in Just Kids from the Bronx, Arlene Alda’s compilation of entertaining and poignant oral histories and New York success stories. (Photos courtesy of Henry Holt and Company)
Before she played professional clarinet, before she became a photographer and authored 19 books, before she married Alan Alda, FCRH ’56, Arlene Weiss was just a kid from the Bronx. She shared a one-bedroom apartment with her parents and two older siblings, playing cards in the small dinette with flowered wallpaper hand-stenciled by her father.

A few years ago, she met Millard (Mickey) Drexler, CEO of J.Crew, and learned he grew up on her block. “Which building?” she asked. Turned out they’d both lived in the 96-apartment Mayflower, so they hatched a plan to return together. When she entered the lobby, Alda writes, “I heard myself as that ten-year-old girl again, tossing my beloved Spaldeen ball.”

The visit inspired her new book, Just Kids from the Bronx: Telling It the Way It Was: An Oral History. More than 60 Bronxites, from former Secretary of State Colin Powell to hip-hop pioneer Melle Mel, recall their early years growing up in the borough.

“Children of Jewish, Italian, and Irish immigrants giving way to children of African American, Puerto Rican, and Dominican newcomers,” Alda writes, “and I felt moved and connected to them all.” 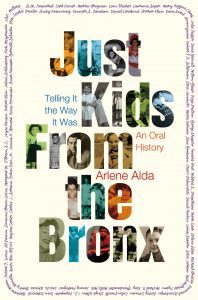 Appropriately repping the Bronx—and Fordham—the alumni featured in the book come from diverse, humble backgrounds and have made indelible contributions to the city (and beyond) in the arts, sports, medicine, even spirits.

In her chapter, best-selling suspense novelist Mary Higgins Clark, FCLC ’79, praises the Bronx’s beauty to anyone who dares doubt it: “Not only is Fordham University there, but there’s also Mosholu Parkway, Pelham Parkway, and the Botanical Garden, for heaven’s sake.” She recalls her father’s tragic death from a heart attack when she was just 11. “I’ve missed him all my life,” she says. The family moved away when they lost their house for “lack of just a few hundred dollars.” When her mother would go back to visit, she says, “She’d come back with her eyes glistening, saying how beautifully the roses had grown.”

Higgins Clark lost her own husband as a young mother. She supported her five children by selling novels and taking other writing gigs, attending Fordham after she’d had some success. To date, her books have sold more than 100 million copies in the United States alone.

“The Irish have a gift of storytelling,” she tells Alda, recalling a quotation from Yeats: “‘Being Irish, he had an abiding sense of tragedy which sustained him through temporary periods of joy.’ I have that framed on my desk,” she says. “I absolutely love it.”

Rock and Roll Hall of Famer Dion DiMucci grew up a block away from the Bronx Zoo, not too far from Higgins Clark’s former home. “I’d jump over the fence on Southern Boulevard and meet giraffes and hippopotamuses. I mean, it was wild,” says the hitmaker.

He speaks proudly of the honorary doctorate he received from Fordham in 2013. “[I]t felt like it came around full circle. I was born in Fordham Hospital,” he says. “It connected so much for me. … Getting that honorary degree was one of the greatest experiences of my life.”

Michael Brescia, MD, FCRH ’54, also received an honorary degree from Fordham—in 1994, four decades after his student days at Rose Hill. The executive medical director of the Bronx’s Calvary Hospital recalls growing up in an Italian family of six and sleeping in the living room on a branda—a foldout bed. “My father would put his heavy coat on top of me when he came home from work,” he says. Hit hard by the Depression, Brescia’s father wanted him to become a plumber so he’d have job security.

But one day, a big black car pulled up in front of their building. An elegant doctor emerged  to visit an ailing boy, and “it was then that I got the idea to be a physician,” Brescia says. During the 1960s, he co-invented the Cimino-Brescia fistula, a revolutionary hemodialysis procedure, and under his leadership, Calvary has become a national model for palliative care programs. He says his success “spawned many other doctors in the family whose fathers said to them, ‘Forget about being a wallpaper hanger! If Mickey could do it, then you could do it!’”

New York Yankees play-by-play broadcaster Michael Kay, FCRH ’82, also came from humble beginnings. As a kid, he didn’t always have the money to see his beloved Bronx Bombers, but when he could scrape together a buck fifty he’d buy a ticket and sit “right behind home plate in the upper deck, last row. I tell people that I now have the same seat, but a lot closer,” he says.

Kay recalls two “phenomenal” teachers who knew how much he loved the Yankees. On April 6, 1973, the day Ron Blomberg would become the first-ever designated hitter, the teachers wheeled a TV into Kay’s sixth-grade classroom. They said, “‘All right, Michael, you can see this.’ Blomberg walked with bases loaded, they unplugged the TV, and walked out.” When Kay got to Fordham, he developed his broadcasting chops at WFUV, the University’s radio station. Today his voice is synonymous with the team he’s always loved.

Renee Hernandez, MD, FCRH ’94, saw a different side of the Bronx growing up. “Where I was in the South Bronx, buildings were burning, and there was a crack epidemic, HIV,” he says. But his close-knit Puerto Rican family surrounded him with love. “I had a couple of aunts living floors above us and a couple of uncles living below us.” He eventually set up his internal medicine practice in the old neighborhood. “I wanted to create an environment that was very different from what my mother used to go to, which was more like a Medicaid mill,” he says.

Not far from his medical office, Hernandez opened Tirado Distillery, the first legal distillery in the Bronx after prohibition. He credits a 2009 trip to the Bacardi factory in Puerto Rico and his Fordham degree as his inspirations.

“My background was in organic chemistry at Fordham University and I did a lot of research there. In that research we used a distillation apparatus,” he says. “Once I saw what Bacardi was doing, I knew that I could do it too.”

Hernandez never touches alcohol; his father is his taster. But he sells his rums and corn whiskeys throughout the city and beyond, exporting a little bit of that Bronx flavor that’s always made him proud.

—Nicole LaRosa is the associate editor of this magazine.