skip to main content
Return to Fordham University
You are at:Home»Fordham Magazine»Bringing Outer Space Issues Down to Earth
An artist’s conceptual rendering of Earth’s orbital debris, one of many security-related issues for which the Secure World Foundation seeks global solutions (Shutterstock)
In the mid-1960s, when the excitement of the space race stoked his interest in becoming an astronaut, Michael Simpson saw this career idea evaporate in a height measurement. At six-feet-plus, he was too tall for the vessels that were then being used to propel humans into orbit.

“It was not meant to be,” said Simpson, a 1970 graduate of Fordham College at Rose Hill.

Since then, however, he’s found his way to another role in the space race, an earthbound occupation with responsibilities that show just how complex—and potentially fraught—the exploration of the final frontier has become since his youth.

As executive director of the Colorado-based Secure World Foundation for the past seven years, he has worked with all the governments and private companies that have joined the space age since the days when the U.S. and the Soviet Union were the only two players. The foundation works for peaceful, sustainable use of outer space, taking on a whole universe of concerns as well as opportunities.

After retiring from the foundation on Oct. 1, he plans to stay engaged with the space-related initiatives it has helped advance around the world. “People are beginning to realize that there’s some real down-to-earth impact, for better and for worse, from space technology, and that’s the future,” he said.

Simpson was interested in science from an early age, and edited a science newspaper as a student at Edgemont High School in Westchester County, New York. As an honors student at Fordham, he took to political science, an interest that was fueled when political science chairman James C. Finlay, S.J.—later president of Fordham—got him an internship at the New York state constitutional convention in 1967.

“How he pulled that off, I don’t know,” Simpson said. “It was mostly graduate students and seniors, and there I am, a rising sophomore, trying to figure things out.”

He later earned several advanced degrees, including a doctorate from the Fletcher School of Law and Diplomacy at Tufts University, and embarked on an academic career, serving as president of Utica College, the American University of Paris, and the International Space University in France before joining the Secure World Foundation in 2011.

The foundation has offices in Broomfield, Colorado, and Washington, D.C. It was established in 2002 with philanthropic funding from husband-and-wife entrepreneurs Marcel Arsenault and Cynda Collins Arsenault to bring governments, industry, and various organizations together on potentially fractious space-related issues. 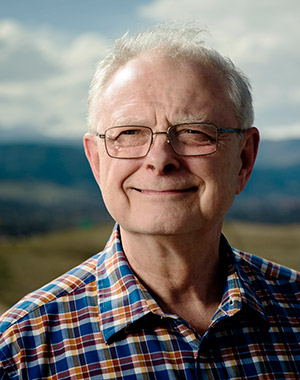 One of these issues is space junk. As unbelievable as it may seem, the vastness just beyond Earth is growing crowded. “We’re at the point where we can’t any longer just sit back and say, ‘Hey, space is big, go do what you want to, you’ll be OK,’” Simpson said.

There are probably 2,000 defunct spacecraft in orbit, along with about 20,000 pieces of detectable debris—the size of a softball or bigger—because of accidents like the collision between a derelict Soviet-era satellite and a privately launched American communications satellite in 2009, Simpson said. “There may be a million pieces that are smaller than a golf ball,” he said. “Maybe pretty soon, we’re going to need a system for traffic management in space” because debris is both dangerous and hard to manage, he said.

Setting up a system for governments to track and mitigate the problem of debris is part of the foundation’s work with the U.N. Committee on the Peaceful Uses of Outer Space. “There’s still a fair amount of trust-building that has to go on to get people to agree that this is not world government trying to take away their chance to be involved in an exciting industry,” Simpson said.

The foundation offers nonaligned expertise that can help nations work through space security issues, said Asif Siddiqi, Ph.D., a Fordham space historian who has worked with the foundation. “I think what they’re providing is a kind of nongovernmental, noncorporate perspective on space security, which is really important, and they have really good people working there who are experts in their particular fields,” he said.

The foundation’s work intersects with military issues at times, as shown by a 2017 initiative to promote greater public study of the weapons that nations are developing to disrupt or destroy satellites and other space technologies.

“Space is not the sole domain of militaries and intelligence services,” the foundation said in a statement. “Our global society and economy is increasingly dependent on space capabilities, and a future conflict in space could have massive, long-term negative repercussions that are felt here on Earth.”

Other security issues relate to incoming asteroids, and not just because of the damage they could cause, Simpson said. He noted that an asteroid burst over the Mediterranean in 2002 with the force of a nuclear bomb; if it had arrived a few hours earlier, it could have burst over the border between India and Pakistan during a military standoff between the two nuclear-armed rivals, he said. “I’m not sure that people would have been rational enough to say, ‘This wasn’t a nuclear weapon,’” Simpson said.

Since then, the foundation helped establish the International Asteroid Warning Network to help prevent such mistakes, and also has its eye on other potentially dangerous scenarios—such as, for instance, one nation intimidating and alarming other nations to the point of crisis by firing a nuclear weapon at an incoming rock.

The foundation works through the U.N. to try to set guidelines for nations’ responses and has brought experts together to talk about how to alert the public to a threat without sparking panic, Simpson said. The foundation’s Broomfield Hazard Scale provides a uniform guide for the threat posed by an asteroid.

“Governance, in effect, is the key thread that I think ties together a lot of our work,” Simpson said. For instance, he said, “if there were no plan for dealing with car accidents, there would probably be a lot more fights around [them]. Most folks, at least, don’t reach in the glove box for a firearm, we reach in for a document. We have a process, know what we’re supposed to do, don’t have to invent it after a challenge occurs. That’s what we’re trying to do with space.”

The foundation works on a wide portfolio of issues, including—recently—an effort to come up with basic rules covering the mining of asteroids and near-Earth objects, Simpson said. In early 2018, he went to the Vatican Observatory for meetings about how to link the U.N. Sustainable Development Goals to Space 2030, the emerging global agenda for space activity.

Space activity remains Simpson’s passion not so much for the science but for its impact on people, an outlook rooted in his political science studies at Fordham—“politics has rules, but people are at the core,” as he put it.

He noted that space has fostered medical advances; the weightlessness of space has shed light on the role of weight-bearing exercise in staving off osteoporosis, he said. Developing nations have used GPS satellites to synchronize their cell towers, expanding cell service without having to set up their own synchronization systems. And crop disease can be detected from satellites, thanks to spectrographic technology that can spot color changes associated with blight.

In other words, all the security worries surrounding space technology are mixed with new possibilities for improving life on Earth.

“It’s mind-boggling. You’d think that the time would come when you cease being amazed by what people are doing,” he said. “[I] really enjoy not only having entered the space sector but the opportunity to continue to work with it, because it just keeps solving problems for people.”

After stepping down as executive director of the foundation, he’ll keep working with various groups devoted to space-related issues. His first stop will be the 69th International Astronautical Congress in Bremen, Germany, where he’ll present a paper on the role of NGOs in the development of international space policy. “Life shows no signs of slowing down,” he said.