In her novel, Garcia tells the intertwined, intergenerational stories of a group of women, starting in 1866 with María Isabel, a cigar factory worker affected by the bloody stirrings of Cuban nationalists’ fight for independence from Spain, and ending with two of María Isabel’s descendants whose fates converge with those of a Salvadoran mother and daughter in present-day Miami.

As the women’s stories progress, Garcia, who studied sociology and communications at Fordham College at Rose Hill, tackles opioid addiction, migrant women in detention, and the stories told and untold that shape their lives and legacies.

Hispanic Women uses both social science and literature to examine the changing roles of Latina women in society with regard to Latino men, motherhood, the labor force, sexual awareness, media, political and economic power, and women’s liberation. Using literature as a lens, students in Rodríguez’s course examine the structural position and changing concepts of Hispanic women in the Americas.

And visiting authors like Garcia help with this exploration. A few weeks before her visit, students also heard from Dahlma Llanos-Figueroa, the author of Daughters of the Stone and Woman of Endurance. 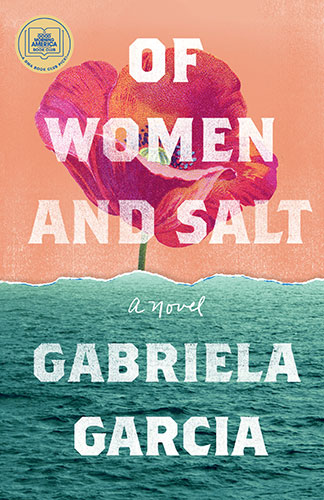 Read an excerpt from Of Women and Salt, a New York Times bestseller, Washington Post notable book of 2021, and winner of Best Book of the Year from Cosmopolitan, The Boston Globe, Real Simple, Marie Claire, Reader’s Digest, Good Housekeeping, Woman’s Day, She Reads, Austin Public Library, and Harper’s Bazaar, among other awards.

During November’s hourlong Zoom session, Garcia, who has her own fond memories of taking a class with Rodríguez before graduating in 2007, shared how Fordham helped shape who she is today, her favorite part of the writing process, and why women figure so prominently in her work.

She also delved into the meaning of “salt” in the novel’s title. Though she was drawn to the word’s versatility and varied connotations, Garcia said she “looked at elements that kept coming up multiple times [as she was writing the novel], and salt was one of those. And it can mean so many things,” from the salt of the ocean and sweat and tears to biblical references.

Liliana Gutierrez, a senior in the Fordham Theatre program, asked Garcia about the nature of history and why she adopted a nonlinear, vignette style for the novel.

Garcia explained that such a structure ensures that the book has “that feeling of stories.”

“When I think about history, I think it’s important to always realize that we’re talking about a story. It’s in the word,” she said. “I knew that I didn’t want to write a sweeping saga that went into all the details of these past characters fully: I wanted glimpses,” like those you have of your own history.

Hannah Berggren, a sophomore majoring in urban studies and sociology, wondered how extensive the research process was for the novel, particularly regarding the intimate details that emerge regarding migrant detention centers and the experiences of the women held there. Garcia drew from her own experiences to fuel those passages, she said: Prior to enrolling in an MFA program in creative writing at Purdue University, she did some organizing work with women in deportation and detention centers.

Rodríguez said she felt that the “section on detention was one of the best” in the book “because you see this coverage in the media where people, or politicians essentially” drop in with platitudes, “but it’s only when you read your descriptions from the women’s perspective that you really get the full picture,” she told Garcia and the class.

Garcia, who also writes poetry and short stories, is at work on her next novel. Though it’s early stages yet, and she’s “still figuring out the meat of it,” she knows one thing for sure: It will center on women characters.