skip to main content
Return to Fordham University
You are at:Home»Fordham Magazine»Features»At Washington, D.C., Reception, Fordham Alumni Welcome President Tetlow
Photos by Joshua Fernandez
More than 130 Fordham alumni, parents, and friends gathered in the nation’s capital on September 21 to welcome the University’s new president, Tania Tetlow, and celebrate the “long maroon line” that connects students and alumni through the years.

Attendees represented nearly every one of the University’s schools and colleges, and class years from every decade going back to the 1950s.

Mary Anne Sullivan, TMC ’73, vice chair of the Fordham University Board of Trustees, and her husband, Larry Petro, hosted the reception at the Washington, D.C., offices of Hogan Lovells, where Sullivan is a partner.

“Washington event spaces are often all about the view,” Sullivan noted as she greeted attendees, who mingled in a light-filled reception room and on its adjoining terrace as the sun set over the Washington Monument a few blocks away.

Before introducing Tetlow, Sullivan spoke about the impact Fordham and Jesuit education have had on her own life—an impact that began with her parents, both of whom were Fordham Law School graduates.

She said her mother, a daughter of Irish immigrants, attended both the School of Education and the School of Law at night during the 1940s. She eventually became a judge, and Sullivan said both of her parents were leaders in the fair housing movement in Albany. “We didn’t talk about ‘men and women for others’ then. That’s just the life they lived. And what they taught me.”

She said when she got to Fordham as an undergraduate at the tail end of the 1960s, she loved “studying hard about things that were hard.” And though she described herself as “a bit of a nerd,” she was also among student protesters who “took over the administration building during the war in Vietnam.” 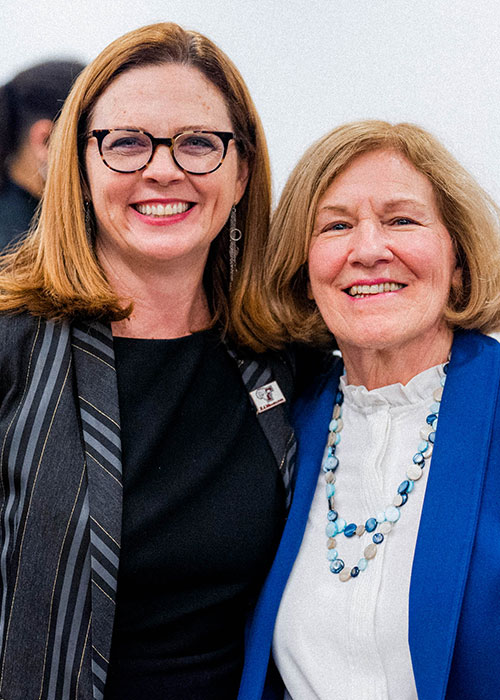 Tania Tetlow (left), president of Fordham, with Mary Anne Sullivan, vice chair of the University’s Board of Trustees

“That was my first visit to what is now Tania’s office,” she said to laughter from attendees, some of whom were among those who occupied the Fordham president’s office at the time.

“Decades later,” Sullivan said, “I remember specific conversations I had with individual professors about metaphysics—my major—Russian literature, and economics, to name just a few. I learned to think hard and to think about things in ways I had not previously considered. There were so many aha moments … and the skills I took away from Fordham have served me over and over in all aspects of my life.”

Sullivan said she’s now looking forward to seeing that “future generations of Fordham grads” have the same opportunities she had—“their own aha moments, their own experiences of New York that only Fordham can provide, and strong skills to bring to making the world a better place.”

She described Tetlow as the right leader at the right time for Fordham.

“She’s clear-eyed about the enormous challenges facing higher education and the challenges facing our students, but that doesn’t make her cautious,” Sullivan said. “It makes her bold, ambitious, impatient, ready to play the long game, as she says, to move forward.”

Sullivan said her favorite line from Tetlow’s recent State of the University address is one that “parents in the room here will really appreciate: ‘Every penny that Fordham spends represents the life savings of our families.’”

“This is a woman who’s going to move us forward by keeping her eyes on everything that matters to our students and their families,” Sullivan said.

A ‘Sense of Driving Purpose’

The event marked Tetlow’s first official visit to Washington, D.C., as president of Fordham, but she told attendees that she is no stranger to the nation’s capital.

“I grew up in New Orleans, and my mentor was Congresswoman Lindy Boggs, so I would come up here all the time. … She taught me to love this city, to love the Congress, and to love the history of the place,” Tetlow said, “so I just feel so at home here.”

She spoke about her love for Jesuit education—“that sense of driving purpose that makes us thrilled to come to work every day, to teach, to have an impact on the world as we do and as Fordham does in magnificent ways.”

In her first months as president, she has been delighting in the many stories she’s heard from alumni about how Fordham has made all the difference in their lives, she said. Many of them were the first in their family to go to college, and for them, “Fordham was the trajectory that sent them into a world that would have squandered their talents. But Fordham didn’t,” she said.

“The direction I want to us aim is to have as much impact on the world as we can, which is the point of why we do what we do, but it’s also in our self-interest, because this generation of students demands that,” Tetlow said. “They are a cynical bunch. They inherited a pretty broken world … [and] they want to know that the school they chose isn’t just virtue signaling. They want to know that it’s a place that really matters.”

The reception in Washington, D.C., was one of a series of opportunities for alumni to meet Tetlow throughout the country—and even in London—in her first year as president. To see a full list of events, visit forever.fordham.edu/presidential.