skip to main content
Return to Fordham University
You are at:Home»Fordham Magazine»Features»At the Jersey Shore, President Tetlow Kicks Off Tour to Connect with Fordham Alumni
Photos by Devin Peppler
An exciting time. A new sense of energy. A fresh perspective. That was how Fordham alumni, parents, and friends described meeting Fordham’s new president, Tania Tetlow, at her first alumni presidential reception, in Spring Lake, New Jersey, on August 25. More than 200 people gathered at the Spring Lake Bath and Tennis Club, the largest group ever to attend this annual event, and they welcomed Tetlow with a standing ovation.

“It’s radical, it’s different, it’s good,” Victor Tuohy, GABELLI ’70, ’72, said of Tetlow’s appointment as the first layperson and first woman to serve as president of Fordham in its 181-year history.

Tetlow, who had served as president of Loyola University New Orleans for four years before beginning her tenure at Fordham on July 1, told attendees the story of how she exists because of the University—her parents met and fell in love as graduate students at Rose Hill in the late 1960s. Although her father, Louis Mulry Tetlow, Ph.D., passed away in May 2017, one year before she became president of Loyola New Orleans, she credited him with helping to prepare her to lead that Jesuit institution and now his alma mater Fordham, in part because he had been a Jesuit priest before leaving the order to start a family.

Tetlow said that Fordham’s future is about “really doubling down [on] our identity” as a Jesuit Catholic institution.

She described Fordham as “a place that really believes in training our students in discipline and hard work and keen intelligence, and giving them the tools to go out there and make a difference,” to “lead lives of purpose and integrity” and become “the kind of people that you in this room, as alums, represent so well.”

Joan Garry, FCRH ’79, said that she believes Tetlow is the right person to carry forth the Jesuit tradition at Fordham.

“I also think that you don’t have to be a Jesuit to embody the values of Jesuit education,” she said.

Garry said that she and her wife, Eileen, often refer to Jesuit values as “interfaith values”—ones that can include people of many different backgrounds and beliefs.

“I think that for the University to make a statement, that [the president] is a female who is not a Jesuit, actually amplifies that message” of inclusion, she said.

Tetlow said that she believes there’s “real momentum” surrounding Fordham, particularly because of its location in “the most exciting city in the world, the center of the global economy, the place of so much opportunity and cultural richness and chances to be a person who has impact.”

“I’ve now figured out that every third person I meet in the city of New York went to Fordham, and there’s a reason our graduates get really good jobs here because you all take care of them,” she said, gesturing to the alumni in the room.

Among the attendees was Robert E. Campbell, GABELLI ’55, a trustee emeritus and former chair of the Fordham Board of Trustees who led the 2002 search committee that selected Tetlow’s predecessor, Joseph M. McShane, S.J. He said he hoped she would build on Father McShane’s accomplishments in the past two decades and on her unique experiences as a leader to continue to elevate the university.

“I think it’s great,” he said, after he met with her right before the official reception began. “It’s a whole new perspective—it’s just new and exciting and I think that she’ll be great.”

For young alumna Mia Behrens, FCRH ’21, seeing Fordham hire its first woman president was powerful. She said that she and her friends thought the University was still a few presidents away from hiring a layperson, let alone a woman.

“I think it’s definitely really exciting to see a woman in a position of power,” she said. “I also think everyone knows that she has big shoes to fill [in following] Father McShane, and I think picking a woman was a really good idea because there’s not going to be as much comparison—it’s going to be just a completely new Fordham era.” 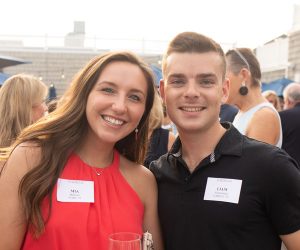 Behrens attended the reception with Liam Fitzmaurice, GABELLI ’21, who described meeting Tetlow as “an awesome experience.”

“I think it’s pretty exciting to see what she’s going to do with the school, being the first non-Jesuit president,” he said.

Ottilie Droggitis, a 1978 graduate of Marymount College, said she is excited that Fordham has its first woman president, and she hopes it will strengthen the bonds between Fordham and Marymount, which was part of Fordham from 2002 until the college closed in 2007.

“As a woman who graduated from an all-women’s college and is on the [college’s alumnae] board, I can tell you that we are just thrilled now that a woman is … the head of the University,” she said.

The Importance of Alumni

In her speech at the reception, Tetlow said she’s been trying to immerse herself in Fordham and its community.

“I’m learning so much, listening really hard, and really hearing the stories of extraordinary possibility,” she said.

Tetlow emphasized the importance of how Fordham alumni have helped fuel the University’s growth.

“The institutions whose trajectories take off are the ones whose alumni believe in them and invest in them and are the champions who go out and spread the word, who send their own children, who convince other people to send their children, who … make transformative gifts that matter to the institution [and] take us to the next level,” she said. “And I have met so many of you to know that we are building on something really special.”

The presidential reception in Spring Lake was the first opportunity for alumni to meet with Tetlow, with more following around the country—and even in London—later this year. To see a full list of events, visit forever.fordham.edu/presidential. Tetlow will also be at Fordham’s Homecoming on Saturday, September 17.