skip to main content
Return to Fordham University
You are at:Home»Fordham Magazine»Features»At the Border: Bearing Witness to the Humanitarian Crisis Where the U.S. and Mexico Meet
Above: The hilly, semi-arid terrain near Nogales, Arizona. (Photos courtesy of Fordham faculty)

“The U.S.-Mexico borderlands is a place where the Earth just swallows up bodies,” says Leo Guardado, Ph.D.

He doesn’t mince words about the humanitarian crisis at the border. In May, 144,278 migrants were taken into custody by the U.S. Border Patrol, the highest monthly total in more than a decade. And each year, the agency finds hundreds of corpses—the remains of men, women, and children who died traversing the vast desert and mountain regions on both sides of the dividing line.

The Trump administration’s efforts—separating migrant parents and children, deploying U.S. troops to the border, sending asylum-seekers to Mexico to await immigration court hearings—have not reduced the number of people fleeing poverty and violence in Central America to enter the U.S. without authorization.

Guardado knows all too well the pain and fear that families suffer when making the dangerous decision to migrate to the U.S. He was just 9 years old in 1991 when he and his mother made the nearly 3,000-mile trek from their mountain town in El Salvador.

Today, he is an assistant professor of theology at Fordham. And while the federal government remains deeply divided on how to handle the crisis, he views it not as a political abstraction but as a theological issue.

Guardado was born in a rural town in northern El Salvador during the country’s civil war. As he approached his 10th birthday, his mother feared that he would soon be conscripted by the army or the guerrillas.

She was determined to move him from harm’s way. Family in the U.S. loaned them money, and Guardado said his grandfather probably sold what little cattle the family had to help pay for his and his mother’s journey. He remembers crying with his grandfather as they said their goodbyes, both of them knowing they might never see each other again. And they never did.

“We got on a bus, and I counted palm trees,” Guardado said. He learned two English phrases from his mother—“‘Thank you,’ ‘I’m sorry’—how to be grateful and how to ask for forgiveness,” he said. “These were the only two phrases that I had in my English vocabulary leaving El Salvador.” 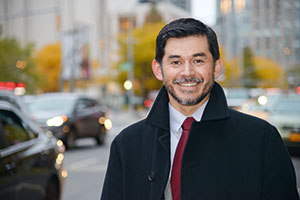 He thinks he counted palm trees as a way of remembering his country. By the time he reached the hundreds, he fell asleep. He awoke in Guatemala, and from there his memory skips through a series of glimpses, mostly involving walking: “A lot. Many days. Under the moonlight.” He traveled with a group of about 15 migrants who followed a “coyote,” a paid guide, for the length of the journey.

He remembers being crammed into false compartments of trailers, packed together “like sardines” for five hours at a time. In Tijuana, they crossed beneath a barbed-wired fence patrolled by jeeps, and in darkness jammed into a small taxi like a “clown car,” which took them over back roads to a white van that ultimately brought them to San Diego.

He and his mother eventually connected with family in Los Angeles, where Guardado was educated by the De La Salle Christian Brothers at Cathedral High School. He earned a full scholarship to attend Saint Mary’s College of California, and it was in his first year there that he finally received legal residency status. He became a U.S. citizen in 2010.

Saint Mary’s is not far from a Trappist monastery, where Guardado spent a year before earning a master’s degree in theology at the University of Notre Dame. For two years, he directed the social justice ministry at a Catholic church in Tucson, Arizona. Then he returned to the monastery for what he thought would be the rest of his life. But there, in isolation, ideas began to “percolate,” he said, and he returned to Notre Dame, where he earned a doctorate in theology.

He initially studied early church history, but his focus changed after he took a course with Gustavo Gutiérrez, O.P., the father of liberation theology, which emphasizes the perspective of the poor.

“I began to crack open the possibility that my own experience, my community’s experience, and the historical reality of Latin America—poverty, oppression, war, violence—that all of this was raw material out of which I could do theological reflection,” Guardado said.

In his dissertation, he wrote about the 1980s sanctuary movement, when hundreds of Catholic churches provided a safe haven for refugees from Central America. Today, he said, only a handful of churches in the U.S. are willing to take that risk. He said bishops will often say providing sanctuary is illegal or too political.

“The term sanctuary often mistakenly gets reduced to politics,” he said. “In light of human displacement worldwide and 11 million undocumented here in the U.S., if we’re to be a church of and for the poor, then you can’t just say ‘no.’ You have to engage with the question theologically. Otherwise, one can argue that it’s an ecclesial sin of omission.”

Guardado said the point of theology is not just to “do religious metaphysics” but to deal with contemporary issues head-on. He is developing a course on migration and theology that will include a visit to the U.S.-Mexico border.

“I want my students to ask: How does theological thinking change the world? How does it change history? How does it leave an impact so that it’s not just thinking about God but actually aims to transform the world?”

Bearing Witness at the Border

Guardado is far from being the only Fordham professor engaging with the humanitarian crisis at the border.

During spring break in March, a group of 10 faculty members went to see it for themselves. They visited the Kino Border Initiative, a consortium of six Catholic organizations in the border city of Nogales—both on the Arizona side and the Sonora, Mexico, side—that serves deportees and asylum-seekers and promotes a spirit of international solidarity. 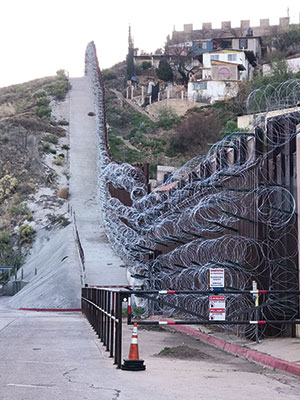 A view of razor-wire coil fencing from the Nogales, Arizona, side of the U.S.-Mexico border

Faculty members raised $13,000 to buy toiletries and necessities for the migrants, and Fordham’s Office of Mission Integration and Planning funded the trip. Michael C. McCarthy, S.J., vice president for mission integration and planning, said it was a necessity, given how migration is now a major global challenge.

“Because this is such a major social issue and it impacts questions of justice, what we want to be as a society, and how a place like Fordham, as a Jesuit university, tries to develop students, we decided the border would be a great site for this immersion experience for a diverse group of faculty members,” he said.

It was the second time Reich went to Nogales, having worked with the Kino Initiative in January 2018. Although only 14 months had passed, the experience was very different, she said. As before, the group stayed overnight in Arizona and crossed the border to work in a comedor, or cafeteria, in Mexico, that provided meals to people waiting for asylum claims to be heard in the United States.

In 2018, she said, they would typically have one seating of 40 to 50 people—mostly men, a few women, and very few unaccompanied minors. This time, there were multiple seatings with 300 people per meal.

“We spent a lot of time holding babies while people could eat, or entertaining children, or sitting and talking to groups of families that had left Honduras, Guatemala, or regions of Mexico that were affected by gang violence and poverty,” she said. 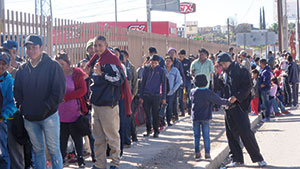 Migrants wait in line for food outside a comedor, or cafeteria, in Nogales, Mexico.

In addition to serving meals, the group hosted a party at a women’s shelter, met with Border Patrol agents, and hiked along the border to understand the conditions there.

They also attended an “Operation Streamline” hearing in Tucson, Arizona, where immigrants appeared in a group before a judge, who often deported them for being in the U.S. illegally after asking two quick questions.

Glenn Hendler, Ph.D., a professor of English and American studies and acting chair of the English department, said he was surprised to learn that a wall was constructed through the middle of the city of Nogales in 1994, long before President Donald Trump made building a border wall his signature campaign promise. 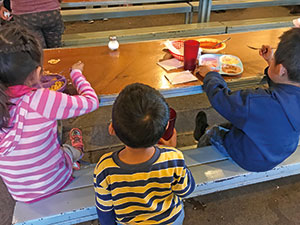 A scene from the Nogales, Mexico, comedor where Fordham faculty helped serve meals to migrants in March 2019

Although he does not speak Spanish, he was able to connect with a 6-year-old girl at the comedor whose father was washing dishes nearby.

“It was an incredible joy to make a child who was going through a horrific experience laugh,” he said. “The next day, we were serving a meal, and I heard a little girl yelling ‘hola, hola,’ and it was the same little girl again. She was happy to see me, and I was happy to see her. But there were so many people there that they just got rushed out, so I never got to say goodbye to this little girl. For some reason, that just broke my heart.”

Speaking with the Border Patrol complicated the picture for Hendler because it showed how difficult the job is, he said. But it did not change his mind about the moral implications of the situation. In fact, he said that by then he felt more emotionally connected to what had previously been an abstract concept.

Carey Kasten, Ph.D., associate professor of Spanish, was moved by learning specific details of the migrants’ experience, like why black water bottles are a must for those crossing the border at night. (They don’t reflect moonlight.) “We were told to accompany, humanize, and complicate,” she said. “To see those real items that our guide had collected on hikes through the desert, and also to see people get out of a van who’d been deported and go into the soup kitchen we were working in [in Mexico], was something that really stood out.”

McCartin, the theology professor who co-led the trip, recalled a conversation with a man from Honduras who asked if all Americans consider him and his fellow migrants to be criminals. “I said, ‘Oh gosh, no, I have no problem with you.’ This guy was like, ‘Really? I can’t believe that.’ I said, ‘No, I can see how you have a sense that that’s how Americans talk about you, and there are plenty of them that do, but there are also a lot of us that don’t really begrudge you trying to have a better life,’” he said.

“This moment of his being surprised that we’re not unified in our attitudes toward people at the border—a lightbulb went on for this guy, and I’ll remember that.” 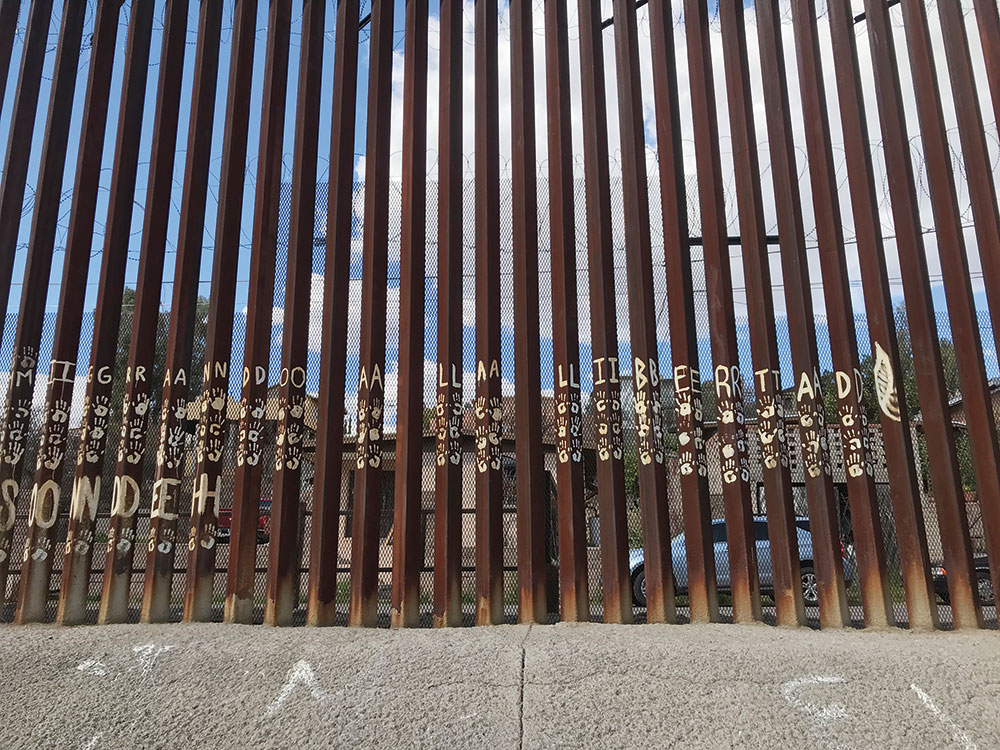 A section of the border wall that cuts through the city of Nogales, Arizona