skip to main content
Return to Fordham University
You are at:Home»Fordham Magazine»Alumni News»At ROTC Commissioning, a Call to Service and Vigilance
Retired General Jack Keane, a 1966 Fordham graduate, addressed the Fordham ROTC commissioning class of 2019. All photos by Chris Taggart
In a commissioning ceremony rich with rousing cheers and martial fanfare, the 2019 graduates of Fordham’s ROTC program were lauded but also challenged by a retired four-star U.S. Army general who gave them a bracing talk on the new duties they face.

“To our soon-to-be officers, congratulations,” said Jack Keane, GABELLI ’66, a national security and foreign policy expert and Fordham trustee fellow who was the ceremony’s featured guest speaker. Later, he added: “The oath which you are about to take is a sacred trust between you and the American people.”

“We who take it, embrace it, and take it very seriously. I expect you to do the same,” said Keane, who administered the oath of office to the cadets. In his address, he outlined several security threats that he said will continue to challenge the military worldwide, ranging from a resurgent Russia to a belligerent and nuclear-armed North Korea. 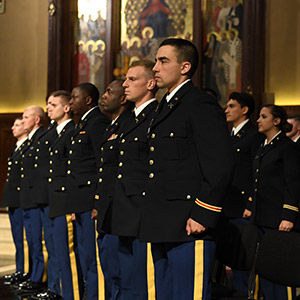 Twenty-two cadets became second lieutenants at the May 17 commissioning ceremony, held in the University Church on the Rose Hill campus the day before Fordham’s 174th Annual Commencement. Another cadet was commissioned on May 20. Nine members of Fordham’s Class of 2019 were among the cadets, who attended a number of New York-area universities.

In his address, Keane told the cadets they are entering not just a job or a career but something “more akin to a vocation” because of the sacrifices and discipline it demands.

Keane noted that he began his own military career as a cadet in the Fordham ROTC program. Following his commissioning, he was assigned to an infantry paratroop unit at Fort Bragg, North Carolina.

It was intimidating. “They were our very best. I did not know if I could measure up,” he said. “The noncommissioned officers, though subordinate to me, were also my teachers. Outside of our beloved Jesuits, they were the most professional and different group of men I ever encountered—smart, confident, totally dedicated, and completely selfless.”

They cared little about his background, he said. “What they wanted to know was, who was I? Was I willing to work hard to learn the necessary skills, did I really care, would my troops truly come first? In other words, they were … more interested in my heart than anything else.”

“I tried awfully hard to earn their respect and trust,” he said. “I eventually became one of them. I lived a life of shared experiences that enriched my life and my family’s beyond expectations.” 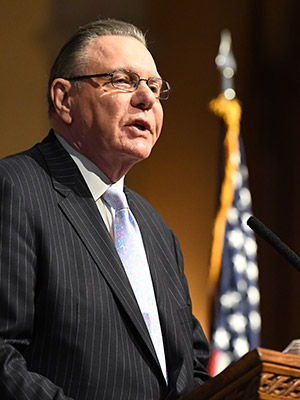 A career infantry paratrooper, Keane was a platoon leader and company commander in Vietnam, where he was decorated for valor. He commanded the 101st Airborne Division and the 18th Airborne Corps, the Army’s largest war-fighting organization, and served as the Army’s acting chief of staff and vice chief of staff before retiring from the Army in 2003. He spoke about the Russia threat before the Committee on Foreign Affairs on May 1, one of many times he has provided expert testimony before Congress.

Keane said the U.S. faces security challenges “on a scale we have not seen since the end of World War II and the rise of the Soviet Union.” They include China’s efforts to dominate the Indo-Pacific region and supplant the U.S. as the world’s leader; radical Islam; and tensions being inflamed by Iran in the Middle East, in addition to the challenges posed by Russia and North Korea, he said.

In light of these threats, along with past defense budget cuts and the erosion of America’s military dominance, the Trump administration’s defense buildup “is even more critical than the Reagan defense buildup of the 1980s,” he said. “The United States military is a much-needed deterrent to these dangers. Your job will be to prepare yourself, your unit and your troops, to be ready.”

“I am proud you want to serve your country,” he said. “We do not take your commitment lightly.”

Speaking before Keane took the podium, Joseph M. McShane, S.J., president of Fordham, reflected on the ideals in the country’s founding documents, calling them “luminously beautiful” but also “inherently fragile.”

“They must be protected, defended, and nurtured in every generation,” he told the soon-to-be-commissioned cadets. “They have called out to you and they have awakened in you the same bold generosity that has marked the lives of our greatest heroes.”

“I admire your courage. I am grateful for your generosity,” Father McShane said. “I am challenged—as I always am when I am in the presence of heroes—by your selfless love of our nation.” 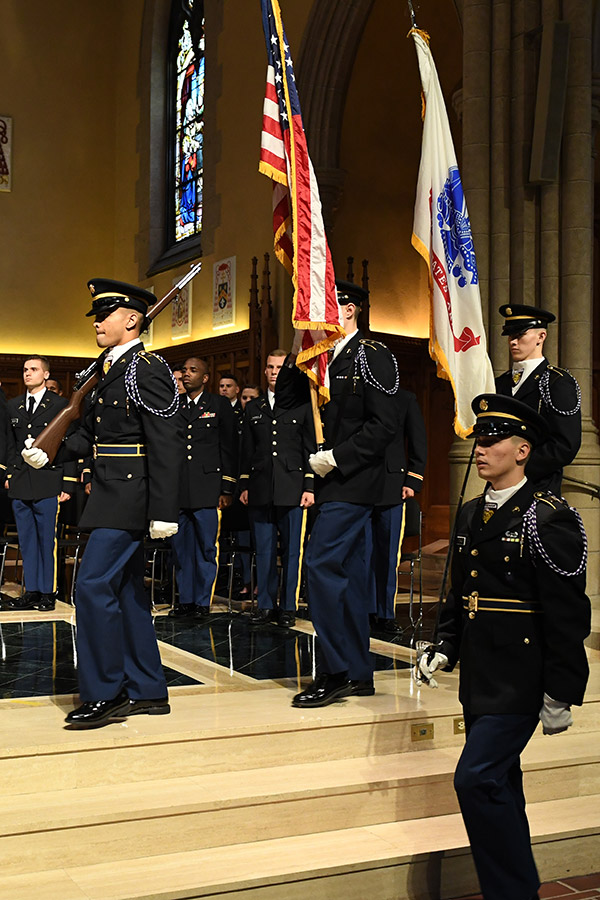 The posting of the colors

During the ceremony, Father McShane presented Lt. Col. Samuel Linn, professor of military science at Fordham, with a certificate praising him for his “transformative leadership” of the ROTC program over the past three years. Linn is departing for Fort Campbell, Kentucky, to command an artillery battalion.

Also on May 17, two Fordham students earned commissions in the Navy ROTC program based at SUNY Maritime College in the Bronx, and the University held an inaugural Victory Bell ceremony at the Rose Hill campus to honor the veterans among the Class of 2019.