skip to main content
Return to Fordham University
You are at:Home»Fordham Magazine»Features»At Lincoln Center, Celebrating Four Decades of Award-Winning Student Journalism
A collage of nameplates The Observer has used over its 40-year history. Collage by Owen Roche
When Fordham students launched The Observer in 1981, they adopted a motto: “The eyes, ears, & voice of Lincoln Center.” Since then, the journalists of Fordham’s Lincoln Center campus have indeed seen, heard, and told stories that have defined the past four decades—from campus expansions and academic program changes to national and global events like September 11, Hurricane Sandy, presidential elections, and the COVID-19 pandemic. And they’ve earned dozens of college newspaper awards along the way.

To celebrate the student newspaper’s 40th anniversary, the current editors of The Observer have published an 88-page commemorative magazine featuring updates on Observer alumni, archival material, and several articles that contextualize the newspaper’s history as part of both a changing campus and a changing world.

“We wanted to make sure that our current editors as well as other editors in the past could kind of [showcase]  that lineage,” said editor-in-chief Sophie Partridge-Hicks, a Fordham College at Lincoln Center senior who oversaw the production of the magazine and related anniversary coverage online.

Partridge-Hicks said she and managing editor Marielle Sarmiento first discussed the project in April 2020, soon after the paper’s editorial board elected them to their current positions and they met with Anthony Hazell, FCLC ’07, and Molly Bedford, the paper’s editorial and visual adviser, respectively. 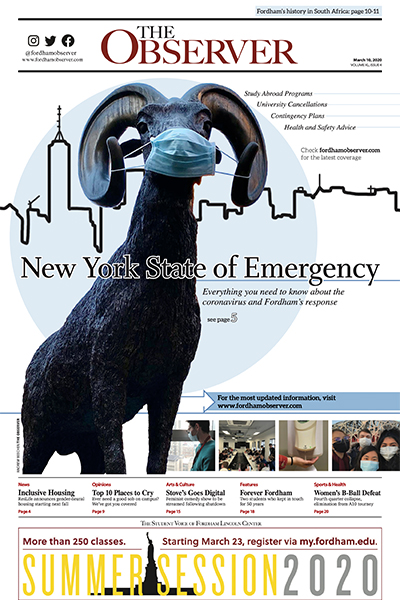 “This was a month and a half or two months into the start of the pandemic, so we didn’t really know what the world was going to look like in a year,” Partridge-Hicks recalls. “Marielle and I had these grand ideas of a huge gala with alumni from the past 40 years and big speeches and a whole event.”

When the pandemic nixed those plans, the editorial board’s anniversary committee focused on producing a special issue, and they were quickly drawn to the idea of a magazine for its relative durability and the opportunity to give layout editors something new to design. The committee met every week starting in December and developed an outline for the kind of content they wanted to include. What was initially going to be a 30-page magazine swelled to 55 pages and, finally, to 88.

“None of us had ever done something on this scale beforehand,” Partridge-Hicks said.

Lifelong Relationships and a Growing Newspaper

The staff split up duties and began poring over the newspaper’s archives, finding notable stories and photos to include in the magazine, from crisis coverage and Black History Month articles to sports writing. Meanwhile, Partridge-Hicks tracked down former editors and spoke to former longtime Observer adviser Elizabeth Stone, Ph.D., a professor of English at Fordham, who tipped her off to more ideas for alumni stories, including a handful of couples who met on the paper’s staff and went on to get married. One of those couples, Natalie Rodriguez DeLessio, FCLC ’06, and Joe DeLessio, FCLC ’06, are the subjects of a feature in the magazine.

“We were always a team back then,” Rodriguez DeLessio said of their time on The Observer. “We’re still a team now, and I don’t think that’s going to change.”

When Rodriguez DeLessio, DeLessio, and Hazell were on the editorial board, The Observer published a special 25th anniversary issue. Hazell said that his undergraduate experience gave him an even greater appreciation for the work the current staff put into the magazine.

“The team of student-editors that worked on the 40th anniversary magazine did an incredible job capturing The Observer’s growth over four decades, its history of award-winning student journalism, and its importance to the Fordham community,” said Hazell, who is director of communications at Bay Ridge Prep in Brooklyn.

The newspaper’s growth has been aided by technological changes, but it also reflects changing approaches to news coverage over time.

“I think the biggest change is the scope of The Observer, because if you think back to the ’80s, it was really a newspaper that was covering the [Lincoln Center]  campus and kind of getting students’ opinions and serving it back into the community,” Partridge-Hicks said. “Then there was a period in the ’90s and early 2000s when they had a global column [with]  updates about what was happening in the world. And I think that you kind of see that push and pull. … How do we report for our student body? But then also how do we report for other people who could be reading us?”

An Alumni Community Finds Success in Journalism and Beyond

In her 35 years as an adviser, Stone witnessed many of the changes the paper underwent.

“The wonderful thing about advising for so long was that I got to advise 35 [cohorts]  of students,” she said. “I saw The Observer morph and solidify itself as a viable culture with an identity, albeit a flexible one. I saw innovations, traditions, and experimentation. Each new editorial board got to try out its own new ideas, at the same time contending with the larger world out there, whatever it was. Happily, The Observer became a community and has affirmed its durability.”

In addition to producing the anniversary issue, the current editors created a contact list of former editors, making it easier for Observer alumni and students to get in touch with each other and see what their peers have been up to since their time on the paper—from becoming a staff editor at The New York Times to a photo producer at Apple. Current editors also hope that the contact list can serve as a form of professional network, providing connections for internships and jobs.

And while the idea for an anniversary gala had to be put on hold, Fordham juniors Katrina Lambert and Grace Getman—the incoming editor-in-chief and managing editor—are hoping to host an in-person alumni event in the fall. In the meantime, the current editorial board members were able to gather for a magazine launch on April 16, with many editors seeing each other for the first time in over a year, and administrators like Laura Auricchio, Ph.D., dean of Fordham College at Lincoln Center, and Keith Eldredge, assistant vice president and dean of student services, joining the festivities. 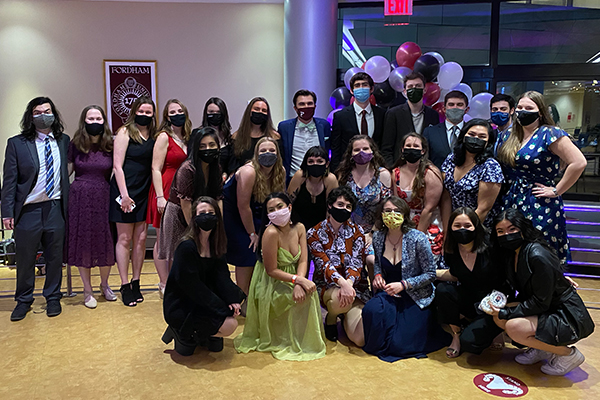 “We still felt that it was really important for the students who had spent nearly five months or so working on this magazine to have an opportunity to celebrate it,” Partridge-Hicks says. “We had everyone dress up, probably for the first time in a year. A lot of people were laughing that they had forgotten how to put on makeup, or no one had worn a suit in a year.

“I think, personally, being involved in The Observer has been the most influential experience of my undergraduate career. And being able to see people in person instead of on a Zoom screen just reaffirms how important those personal connections are.”

Celebrating Camaraderie and Honoring Those Lost

For Hazell, that kind of camaraderie is one he too experienced in his time on staff.

“The Observer provided me with the most memorable experiences I had during my time as a Fordham student,” he says. “The lessons I learned in writing, communication, and leadership are still applicable today in my professional life, and I still rely on the friendships I made.”

Partridge-Hicks said that some of the tougher archival material to go through were the obituaries of students The Observer has published over the years, noting that that one can sense in all of them how much the Fordham community was affected. 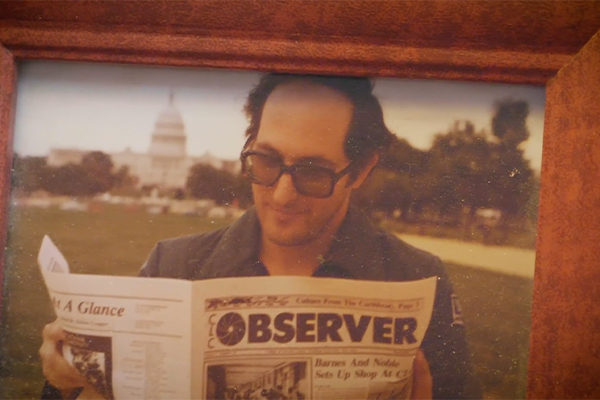 A framed photo of Mitch Berger, FCLC ’83, that the Observer’s co-founding editor kept displayed in his home. Berger died in 2019. Photo courtesy of the Carcinoid Cancer Foundation

When Fordham junior and member of the editorial board Nicole Perkins had the idea to write a story about editors-in-chief 40 years apart, she discovered that Mitch Berger, FCLC ’83, one of the paper’s founding editors-in-chief, had died in 2019. Sarmiento wrote a tribute to him, and Berger’s wife shared with Sarmiento a framed photograph of him holding up a copy of The Observer, a photograph that was displayed in their house for his entire life.

“[It is]  so sad that he’s not still here with us,” Partridge-Hicks said. “But it speaks to how influential this is.”