skip to main content
Return to Fordham University
You are at:Home»Fordham Magazine»Features»At Homecoming, Family with Deep Fordham Roots Comes Back to Reconnect
Members of the Marrin family in front of Cunniffe House, where the first Fordham students were welcomed in 1841. The three couples, from left, are Jennifer Cullinan Marrin and Kevin Cullinan; Richard and Mona Marrin; and Matthew and Rachel Marrin. Photo by Chris Taggart
When members of the Marrin family went to Homecoming on Saturday, they were reconnecting with a place that has been part of their heritage since the mid-19th century, when Fordham was a fledgling college out in the country, not even two decades old.

It was 1859 when the first Marrin graduated from what was then known as St. John’s College. Four more generations of the Marrin family would follow him through the Fordham gates, many of them going on to study law or making their mark in other ways, like contributing to the Fordham football tradition celebrated this past weekend. 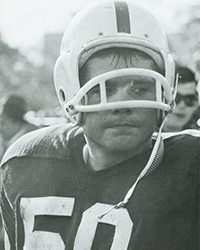 Richard Marrin Sr. as an undergraduate

That’s what Richard Marrin Sr., FCRH ’67, LAW ’70, did, playing under Head Coach Jim Lansing during a pivotal time for Fordham football. His son Richard Marrin Jr., FCRH ’91, LAW ’96, also played for the Rams. He fondly recalls when he and his teammates looked past their own setbacks during the late 1980s to envision the kind of resurgent program Fordham has built in recent years. The Rams achieved a 32-8 record during the past three seasons—fourth best among NCAA FCS teams—and overcame the Penn Quakers, 31-17, on Saturday.

“We knew at the time that our losses, our sacrifices, were a steppingstone,” said Marrin, an attorney who practices in the United Arab Emirates. “We wanted to win, we were used to winning, but we accepted that losing is part of winning, and that someday future Fordham football players would win at the next level. And here we are,” he said.

That ethos of striving after a larger—even heroic—ambition is one aspect of Fordham that he thinks has kept his family members coming back to the University over the years. He and his five siblings all graduated from Fordham: Matthew, James, and Peter Marrin, classes of 1996, 1998, and 2000, respectively; Jennifer Marrin Cullinan, Class of 1993; and Margaret Marrin Spencer, Class of 1990, who, like Richard, also graduated from Fordham Law School, in 1993.

Over the years, many members of the Marrin family have been drawn to legal careers, starting with Joseph Marrin, Class of 1859, who apprenticed in the law and worked as an attorney for Fordham in the days before the University even had a law school. His son Wilfrid graduated from Fordham in 1890—after having been a three-year letter winner on the football team—and apprenticed in law before studying engineering at Columbia University and serving as borough engineer for the Bronx. 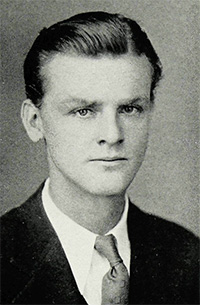 Wilfrid Marrin II, Fordham College Class of 1931. “It will be difficult to forget his easy wit, his warm friendliness, his ready smile,” the 1931 Maroon yearbook editors wrote.

Wilfrid’s son, Wilfrid Marrin II, Class of 1931, was the first Marrin to graduate from Fordham Law School. He practiced admiralty law in New York, and his two sons, Wilfrid III and Richard Sr., graduated from both Fordham College at Rose Hill and Fordham Law. Richard Marrin Sr.—who died in 2010—first attended the University on a scholarship to play tennis and squash, but he later moved on to football. He was inducted into the Fordham Athletics Hall of Fame in 2002 and would go on to become the namesake of the team’s Rich Marrin Most Valuable Player Award.

“My father was so happy to be part of Lansing’s program,” said Richard Marrin Jr., referring to Jim Lansing, FCRH ’43, a former All-American end for the Rams who would help reestablish the sport at Fordham after a 10-year hiatus. Football was only a club sport when it was brought back to the University in 1964, the year Lansing was hired as head coach. After he led the team to national club championships in 1965 and 1968, the team was elevated to varsity status in 1970, and Lansing joined the Fordham Athletics Hall of Fame in 1976.

Pushing the team on was Fordham’s legacy as a national football power during the days of Vince Lombardi, FCRH ’37, the Seven Blocks of Granite, and sold-out games at the Polo Grounds and Yankee Stadium. “It was not far from most people’s memory at the time,” Marrin said.

An Education for the Ages

His own time on the football team amplified some of the signature strengths of a Fordham education, like developing self-knowledge. “I was a less-than-stellar player, but I knew I was contributing,” he said. Through the generations, his family has consistently valued this and other aspects of Fordham’s educational philosophy, like promoting ingenuity and innovative thinking and “engaging the people around you with a loving attitude,” he said.

His undergraduate years were filled with novel experiences, like working on an on-campus archaeological dig for a class in anthropology (one of his majors) and joining his fellow student-athletes for occasional dinner and repartee with professors, including Gerard Reedy, S.J., the former Fordham dean who passed away in March.

“They were intelligent, engaging, funny people we had the honor of being invited to dine with as students,” he said. He’s seen this same welcoming attitude among alumni, “and that’s what makes Fordham special for me, that it’s a living thing,” comprising a sort of diverse, worldwide family connected by common values, ready to share some of their time and attention with one another, he said.

Marrin attended Homecoming on Saturday along with his wife, Mona; his brother Matthew and Matthew’s wife, Rachel Marrin, FCRH ’96, GABELLI ’05; his sister Jennifer and her husband, Kevin Cullinan; and his and his siblings’ children.

Richard remembers being taken to Fordham Homecoming games as a child and learning his way around the Rose Hill campus long before he enrolled at the University. Last fall, he came to a football game with his son, then 8, who “looked at the buildings, looked across Eddies Parade towards Keating Hall, and said, ‘It’s just like Hogwarts,’” the wizardry school in the Harry Potter series, Marrin said. “I told him he’s not that wrong, because there’s magic here.”

[In the photo at top, three Marrin siblings—Jennifer, Richard, and Matthew—and their spouses are shown with eight of their children. From left, they are Jimmy, Danny, Christopher, Charlotte, Olivia, Maximus, Lucy, and Sarkis.]