skip to main content
Return to Fordham University
You are at:Home»Fordham Magazine»Features»At Concert, Generations Come Together to Create New Christmas Tradition
The Fordham University Choirs were accompanied by the Bronx Arts Ensemble during the annual Christmas Festival of Lessons and Carols, held December 4, 2016. Photos by Dana Maxson
Angelic voices filled the University Church on December 4 as members of four choirs took to the altar by candlelight at the 2016 Christmas Festival of Lessons and Carols.

The annual concert, with its carols and biblical readings, has been a Fordham tradition for more than a quarter-century. But another tradition has been taking shape in connection with the concert—and it could be seen in the front pews, filled with 20 retired Jesuit priests along with the Fordham students who have been regularly visiting and assisting them.

The priests—who reside at Murray-Weigel Hall on the Rose Hill campus—have been making group visits to the concert for the past few years, accompanied by student volunteers who visit with them weekly and help them with daily tasks like getting around in wheelchairs or checking emails.

The students benefit as well. “We’re able to serve them and also learn from them,” said one of the student volunteers, Bernadette Haig. 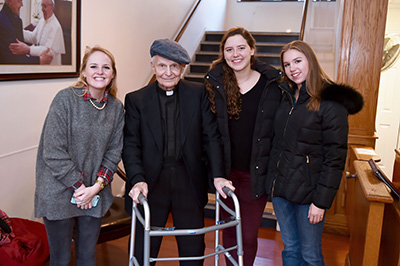 Jeanne Moccia, FCRH ’76, GSAS ’78, who arranged the Jesuit priests’ excursion, has been volunteering at the retirement home for 11 years. A former banker, she became involved after visiting two family friends who retired and moved into Murray-Weigel Hall.

“A couple of years into it, I started doing some things for the men,” she said, “like taking them on walks and accompanying them to events.”

Moccia also helped expand the student volunteer program, now 40 strong, and find new ways to integrate the older and younger generations who live on the Rose Hill campus. Murray-Weigel Hall, perched near Fordham Road on the southern edge of campus, houses an average of 60 Jesuits from widely different backgrounds. Some are retired educators and administrators from Catholic colleges throughout the Northeast; others worked as missionaries around the world.

“One of the perks is that the students can meet individuals who have led very interesting and service-oriented lives,” Moccia said. 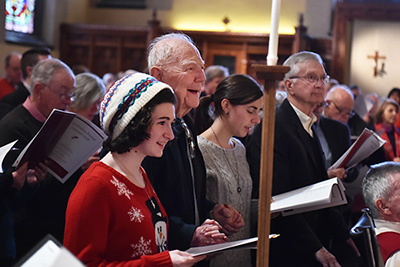 Bernadette Haig and Richard Hoar, S.J., get in the holiday spirit.

Haig, a Fordham College at Rose Hill junior, couldn’t agree more. She accompanied Richard Hoar, S.J., to the Festival of Lessons and Carols this year and has been visiting him weekly at Murray-Weigel since she was a sophomore.

A Long Island native, Haig is double majoring in engineering physics and classical civilization, and especially enjoys discussing her theology and philosophy classes with Father Hoar. She said she writes letters for and reads to the 90-year-old priest, who holds a degree in physics and served as a missionary in Micronesia for 23 years.

Juliette Dixon, a Fordham College at Rose Hill sophomore, pays weekly visits to George Restrepo, S.J., who just moved to Murray-Weigel from Canisius College in Buffalo. He holds a master’s degree in film from New York University, and worked in Baltimore and Puerto Rico earlier in his career.

“Jeanne does such a great job of matching people,” Dixon said. “Father Restrepo is very interested in music, film, and dance, and I am as well. So we always have something to talk about.”

Dixon, a ballet dancer who studies communications at Fordham, also helped organize a talent show for the priests last spring. Another group of students plays music for a small group of the priests each week. 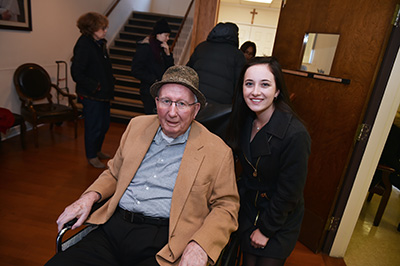 The Festival of Lessons and Carols was a perfect outing for the priest-student pairs, who seem to share an appreciation of the arts.

In his remarks after the concert, Joseph M. McShane, S.J., president of Fordham, told the audience that among them was a very special member of the Fordham community. Joseph A. O’Hare, S.J., GSAS ’68, president of Fordham from 1984 to 2003, was seated in the front row with Jacqueline Tobin, a Fordham College at Rose Hill freshman who’s been visiting Father O’Hare at his Murray-Weigel residence since the fall.

“The concert gives us a chance to put a framework around these times of transition,” Father O’Hare said after returning to Murray-Weigel. “As we end one year and begin another, this is an opportunity for all of us, young and old, to reflect. It’s a nice tradition.”

AUDIO: WFUV, Fordham’s listener-supported public media service, will broadcast a recording of the December 4 concert at 10:30 p.m. EST on Christmas Eve. And you can listen to it anytime here on WFUV’s website.