skip to main content
Return to Fordham University
You are at:Home»Fordham Magazine»Alumni News»From the Study of Classics to the Frontiers of Aerospace
Bernadette Haig posed a question to an astronaut aboard the International Space Station while serving as a NASA intern. Photo courtesy of NASA
As part of a summer internship at NASA, Bernadette Haig, FCRH ’18, had the opportunity to pose a prerecorded question to an astronaut about the value of human spaceflight.

On July 30, the answer came from space: a call for human unity during a time of bitter conflicts, articulated by someone who is—quite literally—above it all.

“We watch the news up here every night, and we’re aware of what is going on in the world,” said Ricky Arnold, a NASA flight engineer aboard the International Space Station, speaking via live webcast. He cited the crew’s cooperative efforts as an example of what can happen when people from diverse nations work together.

Haig and her fellow interns watched from NASA’s Glenn Research Center in Cleveland.

“It was really exciting,” said Haig, who is getting ready for the fall quarter at Stanford, where she will pursue a master’s degree in aeronautics and astronautics.

The experience, part of a NASA educational program, fueled her enthusiasm for becoming an aerospace engineer and, hopefully, an astronaut herself one day. It also provided a thrilling coda to an undergraduate career that was heavy on science and grant-funded scientific research but also on classic humanistic aspects of Jesuit education.

Aviation is a longtime interest. In high school, she volunteered at an aviation museum near her Long Island home and enjoyed working with the museum’s elderly docents—an experience that led her to volunteer at Fordham as an aide to a former missionary—Richard Hoar, S.J.—living in the Murray-Weigel Hall retirement residence on the Rose Hill campus. “He actually has a master’s degree in physics, so it was a great fit,” Haig said.

A student in the honors program, she loved the program’s classics-related courses and kept signing up for more of them—Roman art, Latin, Greek. “Before I knew it, I had a major,” she said. For her senior thesis, she melded her two majors by examining how the Romans, known as great engineers, might have managed to fill the Colosseum with water for mock naval battles, as some have suggested they did.

There’s little evidence this happened. However, “the drains underneath the Colosseum are a lot larger than they would need to be just for rain water and waste water,” Haig said.

She also pursued varied scientific research projects. During the summer between sophomore and junior years, a Fordham Undergraduate Research Grant made it possible for her to work with physics professor Stephen Holler, Ph.D., on developing a new optical-fiber probe for use in analyzing tumors. For her second undergraduate research project, she worked at the Fermi National Accelerator Laboratory outside Chicago between junior and senior year and diagnosed a malfunction in the accelerator’s monitoring components.

She traveled to present her research at academic conclaves on the West Coast, thanks to travel grants provided by the University, and recently was awarded the Fordham College Alumni Association’s Undergraduate Research Symposium grant. 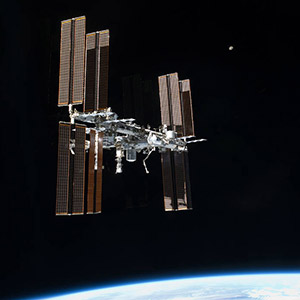 Haig suspects that her research helped her attain the NASA internship, a long-sought prize.

“I’ve been applying for the NASA program for a while, for at least a couple of summers, and I guess this summer I finally had enough research experience,” she said.

She found the internship to be a cornucopia for the scientifically curious. In addition to getting intensive introductions to aerodynamics and computational fluid dynamics, Haig has found scientists and engineers readily responsive to her email queries.

“I’ve found everybody to be so helpful and so willing to talk about their projects,” she said. “There are people working on missions that are going to Mars, stuff that’s going into deep space eventually. People say, ‘Yeah, come on over.’ I’ve been able to make so many connections.”

Aiming a Question at the Heavens

When she was chosen to record a question for the space station’s astronauts, she moved away from the technical and leaned toward the liberal arts, asking a question with a philosophical bent: “In today’s world, what is the most compelling reason to engage in human spaceflight?”

In his answer, Ricky Arnold, the NASA flight engineer, cited the scientific research conducted in space, as well as the crew’s perspective—“a higher plane of agreement”—on all the strife occurring far below.

“We have two Russians, three Americans, and a German right now,” he said, bobbing up and down in the zero gravity and casually moving his hands away from the microphone floating in front of him. “We have found something we all believe in, and the operations both here and on the ground are seamless because we all believe in the same thing. …

“There’s a really powerful message to all humans about what we as a species … are capable of when we put aside differences and focus on higher objectives as a species.”