skip to main content
Return to Fordham University
You are at:Home»Fordham Magazine»As Reunion Approaches, John Connolly Recalls ‘Brilliant’ Fordham Faculty and That Time When Students Brought Football Back to Campus
Story by Claire Curry | Photo courtesy of John Connolly
When John Connolly arrived at Fordham College at Rose Hill as a first-year student in 1961, he found the campus a bit more subdued than the “spirited and close-knit community” he experienced in high school at Fordham Prep.

“It was like a monastery,” Connolly joked. “It was very different from today. At the time, it was a mostly commuter school and it was still all male”—women didn’t arrive in a big way until his senior year, with the fall 1964 opening of Fordham’s Thomas More College for women.

From the start, Connolly and his classmates were determined to enliven the atmosphere. He and Donald Ross, FCRH ’65, his lifelong friend from the Bronx, began organizing concerts on the weekends. They booked popular performers of the day, including Ray Charles, the Clancy Brothers, the Kingston Trio, and Peter, Paul, and Mary.

The concerts were a big hit in the community, and they became a profitable business venture for the Class of 1965.

Next, Connolly and his friends tackled the matter of football. The sport had a rich history at Fordham but had been discontinued due to financial concerns in 1954. So the students spearheaded a campaign to bring it back. They enlisted the support of Fordham College Dean George McMahon, S.J., who in September 1964 helped win the University leadership’s approval to restart the sport.

‘The Campus Was Abuzz’

David Langdon, FCRH ’65, volunteered to serve as coach, and the students quickly set to work building the team. They hosted tryouts and pooled their own money, including funds raised from the concerts, to purchase uniforms, equipment, and insurance. 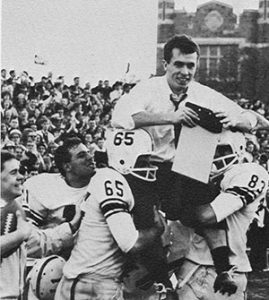 On November 7, 1964, David Langdon (in his cleats) was carried off Coffey Field in triumph after coaching Fordham’s newly formed club football team to victory against NYU.

On November 7, 1964, Fordham’s newly formed club football team beat New York University, 20-14, before a crowd of 13,200 fans at Coffey Field. Jim Lansing, FCRH ’43, the former All-American at Fordham and owner of a local sporting goods store, was soon after hired as coach, and three years later, Fordham boasted the top club team in the country. By 1970, football was a varsity sport at Fordham once again.

“It was a heavenly moment. The campus was abuzz,” Connolly said of the 1964 victory against NYU.

He and his friends found other ways to perk up the local social scene while honing their entrepreneurial skills. For example, he and Ross partnered with their fellow Fordham Prep grad Mario Gabelli, a 1965 graduate of the Fordham business school that now bears his name, to form JMD Enterprises, a company they established to host dances off campus. Connolly said the undertaking was a great success and that the money he earned from the venture made it possible for him to spend a summer in Europe—a journey that turned out to be life-changing.

“I decided that I was definitely going to apply to go to Oxford after college and, at the end of those two years at Oxford, I met the woman who became my wife,” he said. “So I’m grateful to Mario because he was the business genius among us!”

As an undergraduate, Connolly was devoted to the campus community in many ways—through his roles on student government, as an athlete on the tennis team, and as a member the Fordham Glee Club. He was also a dedicated student, building the pillars for his future career in academia.

Though he was an English major, Connolly gravitated toward philosophy and medieval history, areas he later specialized in as a professor at Smith College in Massachusetts, where he taught and served as an administrator for more than 40 years.

So influential were his Fordham professors in inspiring his interest in the Middle Ages that he dedicated his 2014 book, Living Without Why: Meister Eckhart’s Critique of the Medieval Concept of Will (Oxford University Press), to three of them. 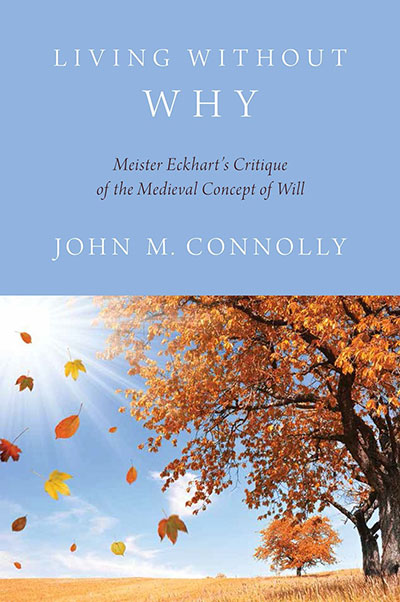 “Norris Clarke, S.J., Robert O’Connell, S.J.—both philosophers—and Jeremiah O’Sullivan, a medieval historian, were among my very best teachers ever,” he said. “They were brilliant lecturers, and expert at engaging our interest in their respective and fascinating subject matters.”

Connolly said he knew nothing about the Middle Ages before taking O’Sullivan’s course as a sophomore, and he was “hooked” in the first half hour. He still has his notes from that class.

“Meister Eckhart said in one of his sermons: If the only prayer you ever said was ‘thank you,’ it would suffice. I inscribed it on the same page as my dedication in the book.”

Connolly also pursued graduate studies at Princeton University and earned a doctorate at Harvard University. In addition to teaching at Smith, he served as the college’s first provost and dean of faculty, and as acting president during the 2001–2002 academic year. He returned to full-time teaching as the Sophia Smith Professor of Philosophy before he retired in 2014.

Connolly has kept in touch with many of his friends from Fordham and looks forward to reminiscing about the good times they shared together at the upcoming Jubilee weekend, June 3 to 5. It will be the eighth or ninth Fordham Jubilee he has attended—he’s stopped counting—and he encourages his classmates and other Golden Rams to join the celebration. “I think we had quite an extraordinary class,” he said. “Don’t waste an opportunity. It’s a very special experience.”

Among the festivities, Connolly is eager to attend Friday night’s dinner and breakfast on Saturday, and to hear from Joseph M. McShane, S.J., president of Fordham, whose Jubilee welcome address Connolly expects will be a “valedictory” of sorts. Connolly’s also looking forward to hearing more about Fordham’s future with Tania Tetlow, whose tenure as president begins on July 1.

“[Father McShane is] finishing his 19 years, and he’s had a great run. I’m looking forward to hearing his point of view [about the University’s future]. With the first woman president—and first layperson—this is a very exciting time for Fordham.”

What’s the best piece of advice you’ve ever received?
I’m going to appeal to 14th-century philosopher Meister Eckhart. He told his listeners to live without “why.” Do the good, but don’t do it in order to be rewarded in any way. That’s the merchant mentality. You do something good in the hope of being rewarded and in particular, being rewarded by God, by getting to heaven or something. He said that’s the wrong attitude. The right way to do it is to do the right thing because it’s right. My book is built around that. It’s called Living Without Why: Meister Eckhart’s Critique of the Medieval Concept of Will.

Name a book that has had a lasting influence on you, and tell us why.
I have probably read Tolkien’s Lord of the Rings five times. It has this medieval flavor to it though it’s not set in the Middle Ages. He’s a masterful narrator and gives such loving attention to the natural world. There is something profound in the story about our inability as human beings to firmly establish a just society. The central character says, “Sometimes some people have to give things up so that others can live in peace.” That sums up a lot of what’s going on in the book, which is this heroic, epic quest.

Who is the Fordham grad or professor you admire most?
That’s impossible to answer! There are so many. Certainly my classmates Donald Ross, David Langdon, and Peter Carter. My professors, philosophers Norris Clarke, S.J., Robert O’Connell, S.J., and medieval historian Jeremiah O’Sullivan. George McMahon, S.J., who was the dean in my last three years at the college, also had a major impact on my life, along with Father [Vincent] O’Keefe, S.J. who became president at the start of our junior year.

What are you optimistic about?
That’s a hard one, at this moment with COVID and the incredible Ukraine disaster. I like to believe, along with Martin Luther King Jr., that the arc of history is long, but it bends toward justice. Right at the moment, it doesn’t look like it’s doing that. But I suppose I’m taking the longer view and I would say sooner or later, we’ll regain our sanity as a nation. That’s my hope, anyway.

After virtual gatherings in 2020 and 2021, Jubilee 2022 will be held in person on the Rose Hill campus from June 3 to 5. The alumni relations office anticipates welcoming its largest group of Jubilarians ever. Learn more and register today.