skip to main content
Return to Fordham University
You are at:Home»Fordham Magazine»Features»Art and Action on the Bronx River
Photos by Argenis Apolinario
On a Friday afternoon in April, Matthew López-Jensen stood more than 300 feet above a grassy plaza in Valhalla, New York, on a pedestrian path atop the Kensico Dam. The granite-faced dam blocks a 30.6-billion-gallon reservoir—a major source of New York City’s drinking water—and marks the start of the Bronx River’s 23-mile journey from Westchester County through the New York Botanical Garden and Bronx Zoo, a short walk from Fordham’s Rose Hill campus, before reaching neighborhoods in the South Bronx, where it empties into the East River and Long Island Sound.

With more than 15 Fordham students gathered around him, López- Jensen encouraged them to consider what used to lie beneath where they were standing.

“Along the river, especially up here in the northern part, we’d find neighborhoods. And where there’s sand and where there’s rocks, if we were to walk around and just look, we would find stuff from the old communities that used to live along the banks here,” said López- Jensen, an adjunct professor at Fordham.

The reservoir covers Kensico, a mill village established in the early 1700s, López-Jensen said, reminding the class of their reading of The Bronx River in History & Folklore (Arcadia Publishing, 2015) by Stephen Paul DeVillo. Before the dam was completed in 1917 to help provide water to the growing New York City area, the city condemned properties along the river, dismantling homes and businesses before flooding the village to make room for the reservoir.

“Think about the history—if you just came here, you would be like, ‘Wow,’” he said, referring to the majestic dam and expansive public park below. “But you read that there’s an old village underneath all this, and you can think about displacement, and the history of displacement and how so much of New York City is just one displaced community after another. The Bronx River has a little bit to do with that. In order to make the Bronx River Parkway, so many neighborhoods had to be cleared out. … And so there’s all these layers of history in every site.” 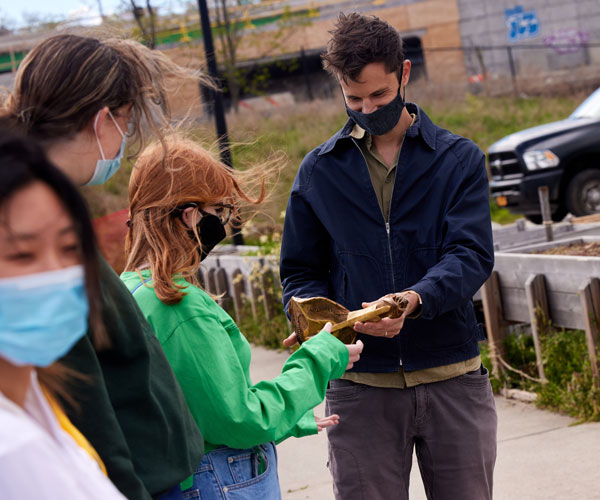 Matthew López-Jensen works with students in his Art and Action on the Bronx River class.

López-Jensen’s outdoor lesson was part of Art and Action on the Bronx River, a new Fordham course created with support from the University’s Center for Community Engaged Learning and taught in partnership with the Bronx River Alliance, a nonprofit established 20 years ago to help revitalize and protect the river and its surrounding communities.

“It’s an art class,” López-Jensen said, but students learn about the history of the river, its ecology, its relationship to surrounding communities, and its connection to New York City’s watershed. Students can adapt the coursework, including video, photography, mapmaking, and drawing assignments, to fit their majors, such as environmental science or urban studies, he added. “And it’s a chance to go outside.”

Angela Payne, a rising junior at Fordham College at Rose Hill, decided to take the class because it combined her primary academic interests.

“I’m a visual arts major and an environmental studies minor,” she said. “It’s really interesting … [to learn]the history of the Bronx River—I had never really considered it before, but I learned so much about this area.”

Mapping and Drawing the River

In his own work, López-Jensen, a multidisciplinary artist and a former Guggenheim fellow, investigates the relationship between local landscapes and the people who inhabit them. He teaches his students how to conduct detailed explorations of the Bronx River—on foot, through photography and video, and by researching and mapping its characteristics.

For one mapmaking project, Gregory Yared, a rising junior at Fordham, spent a day along the river’s banks in Tuckahoe, a Westchester County village about eight miles north of the Rose Hill campus.

“At first I thought I would mark each space where animals could access the water,” he said. “But then, after talking to our professor about ‘desire paths,’” informal tracks that people and animals have made outside of designated routes,“I was like, ‘That’s really cool.’ I thought it would be really interesting to map human and animal
desire paths to the river.”

Yared said the map he created could be used not only by civic planners, who sometimes decide to transform desire paths into formal trails, but also by conservationists looking to control the negative impacts of soil erosion and track how animals get near the water. Yared’s project, along with all of the other students’ work from the course, will become part of the Bronx River Alliance’s collection.

“Because this class has never existed, and so little attention has been given to the Bronx River, we’re basically building an archive of art and design that will be made publicly available,” López-Jensen said.

A view of Concrete Plant Park and the Bronx River

Another goal of the course is to help students understand the troubled environmental history of the waterway and how, beginning in the 1970s, Bronx residents worked together to revitalize the river for the ecological, recreational, educational, and economic benefit of the borough.

Four hundred years ago, the river was called the Aquahung, or “River of High Bluffs,” by the Native Americans who lived in “large settlements along the estuary, where they could harvest an abundance of seafood, especially oysters,” DeVillo wrote in The Bronx River in History & Folklore. After the arrival of European colonists, including a Swedish-born settler named Jonas Bronck, who purchased land near the river in 1639 (and who later became the river’s namesake), many mills and towns began to grow.

As early as the 19th century, the river, formerly home to a variety of plants and wildlife, entered a long period of environmental degradation, due to poor sanitation practices and industrialization, including the construction of the New York Central Railroad. By the late 1800s, a city commission reported that the river was “rapidly becoming an open sewer.” And threats to the river’s health continued to mount amid increasing urbanization in the 20th century.

In the early 1970s, however, “the river’s degradation would inspire a series of volunteer citizen actions that, in time, would produce a remarkable turnaround,” wrote DeVillo, a former development coordinator of the Bronx River Alliance. 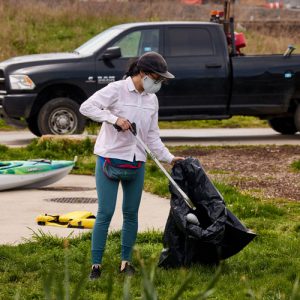 Students from Art and Action on the Bronx River helped clean up Concrete Plant Park on April 30, 2021.

Bronx residents worked together to start cleaning up the river, not only removing debris—including washing machines, cars, and countless tires—but also getting rid of invasive vines; restoring some native plants and trees; stabilizing banks to help stop erosion; reintroducing oyster beds to increase biodiversity and help purify the mouth of the river; and creating a series of riverside parks as part of a Bronx River Greenway. By 2012, eight miles of the Bronx River were designated as a National Water Trail, highlighting the successful efforts
of the revitalization.

Today, the Bronx River Alliance and other nonprofit organizations in the area continue to work to protect and improve the river and its neighboring communities.

Fordham students in López-Jensen’s class were a part of some of these ongoing stewardship efforts on April 30, when they met with a guide from the Bronx River Alliance at Concrete Plant Park, a former industrial site where the nonprofit has reestablished salt marshes and helped add a waterfront promenade and boat launch. On a bright, windy day, the students set off in kayaks to pick up marine trash, photograph the river, and learn about the estuary and conservation efforts.

For Zoey Liu, a 2021 graduate of Fordham College at Lincoln Center who majored in communications, the course made her feel more connected to New York City.

“It’s been such a great experience for me to see what’s around our Bronx campus, and see the history around it. It makes me want to stay here even after graduation,” she said.

“This can be a way to connect with Asian American communities within the Bronx, which is kind of an erased group—right now, there’s not a ton of information online,” she said. “So I’ve been doing some research. There’s a big Cambodian neighborhood up here, there’s a lot of Korean Americans as well. So I plan on seeing their relationship with the Bronx River. And not only focusing on the literal aspects, like the trees or the plants, but also the people in my community and how they have that relationship with the Bronx River.”

The idea came to Liu, who is Asian American, after talking with López-Jensen about how the rise in violence and discrimination against Asian Americans and Pacific Islanders has affected her personally. 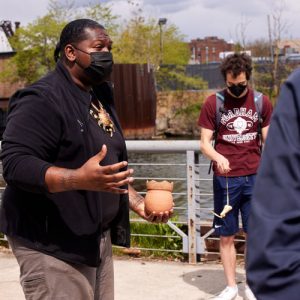 “The last month has been kind of depressing for me,” she said in April. “There was a week when we were supposed to go out on our own little journeys. And I was like, ‘I don’t want to do that by myself right now,  especially with everything that’s been happening, even in broad daylight. And then he brought up, ‘Well, if that’s how you feel, especially towards your own experience right now, how can you … take charge of that narrative? If that’s how you feel, put that into your project.’”

López-Jensen said these are the types of lessons about community, and about how the river “connects the Bronx and cuts the Bronx,” that he wants his students to take away from the course.

“We’ve been researching the history,” he said. “It’s such a close and important landmark for them—the Bronx River—and most of the kids hadn’t visited it before.”

Offering a new course, particularly one that requires hands-on fieldwork, can be challenging in normal times, let alone during a pandemic, but López-Jensen said his students adapted well and appreciated the opportunity to get outside.

“It’s such a hard thing to get across, that this is actually what learning can look like—being someplace, being able to tell a story about it,” he said.

—Kelly Kultys, FCRH ’15, is an assistant editor of this magazine.