skip to main content
Return to Fordham University
You are at:Home»Fordham Magazine»Alumni Spotlight: Keith McGilvery, a News Anchor Whose Fordham Experience Was Shaped by 9/11
Photos courtesy of Keith McGilvery
Keith McGilvery’s first semester of college, and that of his fellow members of the Class of 2005, was one marked by tragedy and the formation of lasting bonds. Just two weeks after they arrived on campus, the unthinkable occurred: a terrorist attack brought down the World Trade Center’s two towers.

“We barely knew each other at that point,” says McGilvery, who is now a weekday morning anchor at WTIC-TV (FOX61) in Hartford, Connecticut. “We were in school for two weeks and somebody came into a class early that Tuesday morning and said something is going on. And the professor just sat there with us, and we talked about it, and we went back to our dorm and you could see smoke from the top of Hughes Hall.”

For McGilvery, that time in his college career, while traumatic, was also one that brought him and his classmates closer together and reminded them of why they had chosen to go to Fordham.

“I think in that moment, you made friends that have lasted a lifetime, and you were immediately reminded of your responsibility to lead with conscience, to be a critical thinker, to be open to a world that was larger than what many of us knew at that point. … People were donating blood, everybody was jumping up to do what they could. And you really saw immediately the character of a class come together to do some really incredible things.”

McGilvery majored in communications and political science at Fordham College at Rose Hill, and he joined United Student Government (USG) on campus, eventually becoming president. On the first anniversary of the attack, USG, along with the recently graduated Class of 2002, unveiled a 9/11 Memorial in the Finlay Gardens, near the Bathgate Avenue entrance to campus. (The memorial was also unveiled at the Lincoln Center campus.) And as a member of his Class of 2005 Jubilee Committee, he and his fellow committee members raised class gift funds for Fordham’s 9/11 Scholarship for their 15th reunion in 2020.

“It was a small gesture,” he said, “but hopefully one that’s packed with a lot of gratitude for the fact that we got through that experience together, and in a small way might be able to help someone else.”

As an undergraduate, McGilvery also worked as a Rose Hill Society campus tour guide for prospective students and their families,  and he was a member of Fordham Nightly News, the student broadcast journalism club and news show that launched during his senior year and gave him some of his earliest broadcasting experience.

“I knew from an early age that I wanted to get into the news and there was literally no better place in the planet to do that,” McGilvery says of Fordham’s New York City location.

While his communications classes gave him the journalistic foundation for his future career—he cites Paul Levinson, Ph.D., and CBS News executive and correspondent Joseph Dembo as particularly inspiring professors—McGilvery also points to his political science courses as shaping his ability to parse difficult topics and engage in conversations around them.

And through the study abroad program Semester at Sea, which brought him to 10 countries across Asia, Africa, and Latin America in 100 days during the fall of his junior year, McGilvery says he was exposed to the world in ways that had a lasting influence on him.

“There’s no better way to see the diversity of the world than through something like that,” he says. “It also brought me back to campus [ready]to ramp up my experience, having been exposed to an even larger world.”

After graduating in 2005, McGilvery worked for a year in health care communications, before deciding to get a master’s degree in journalism at Emerson College in Boston, where he continued to hone his broadcasting skills.

Upon completing that two-year program, he began his first broadcast job in 2008 at WVIR-TV (NBC29) in Charlottesville, Virginia. He says he chose that job over one in Bangor, Maine, because having grown up in Massachusetts and stayed in the Northeast for school, he wanted to try living in a different part of the country. As a reporter for the station, he was tasked with writing, reporting, filming, and editing his stories.

McGilvery spent three years in Charlottesville before moving to Burlington, Vermont, in 2011 to take a job as an anchor, reporter, and talk show host at WCAX-TV (CBS3). He anchored the nighttime broadcast there with co-anchor Jennifer Costa, FCRH ’06, and on the daily afternoon talk show he hosted, he covered “everything from politics to sports to cooking to entertainment,” he said.

Then, in 2017, he began his current role at FOX61, where he anchors the news desk from 4 to 6 a.m. He is now back in the station’s studio for that early morning shift after eight months of anchoring from his living room during the height of the COVID-19 pandemic. From 6 to 11 a.m., he does field reporting, traveling around Connecticut to tell what he calls the “good news stories of the people who live in our region.” And although he also covers more hard news events like President Biden speaking at the U.S. Coast Guard Academy’s commencement this past May, McGilvery says it is the everyday stories of people doing good that he relishes more than anything.

“Everyday people have extraordinary stories,” he says. “I have the privilege of an incredible platform to share really interesting people and innovative ideas and folks who may not otherwise get that exposure.”

McGilvery credits Fordham with helping to shape him both professionally and personally, noting that he is still close friends with many of his classmates and that he brings his school spirit to work, asking his co-anchors to wear maroon with him on Fordham Giving Day.

“There are few experiences in my life that rival my four years on campus, and I know the richness it has brought to my life, to my friendships, to who I am today,” he says. “And I feel privileged to share a little bit of that with other people.”

What are you most passionate about?
I love to try new things, and I’ll do just about anything once. I [recently]flew in a Chinook helicopter and trained with the Connecticut National Guard. Other weeks, it’s anything from aerial yoga and rock climbing to lacing up with Disney on Ice. I also do a lot of volunteer work with the Down Syndrome Association of Connecticut and got the chance to sponsor an assistance dog named Morrissey through the nonprofit NEADS World Class Service Dogs.

What’s the best piece of advice you’ve ever received?
My dad told me that people are lucky to have one positive experience with someone else during the course of the day, and why not be that person? My mom taught me not to sell myself short and that a handwritten thank-you note still means a lot. 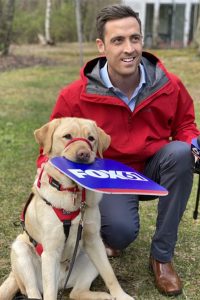 McGilvery with Morrissey, the service dog he sponsored.

What’s your favorite place in New York City? In the world?
I made some of my best friends in Hughes Hall and never missed an opportunity to recruit new Ram fans on Eddies Parade. I also studied abroad while at Fordham and loved the Great Wall of China and going on safari in Tanzania.

Name a book that has had a lasting influence on you.
Right now, I’m reading Fraternity by Diane Brady. It looks at the bold leadership of a Jesuit priest who worked to bring a group of young Black men to the College of the Holy Cross following MLK’s death in the 1960s.

Who is the Fordham grad or professor you admire most?
Dennis Ahern, FCRH ’67, assistant principal for professional development and supervision at Fordham Prep. I met Mr. Ahern while I was at Fordham with his two children, Kevin, FCRH ’05, and Caitlin FCRH ’08. For almost 50 years, Mr. Ahern has mentored generations of young people in the traditions of Jesuit education. He inspires people to be curious and kind. He’s a man for others, and his humble leadership has helped countless students lead lives committed to doing good. He reminds us all that character counts.